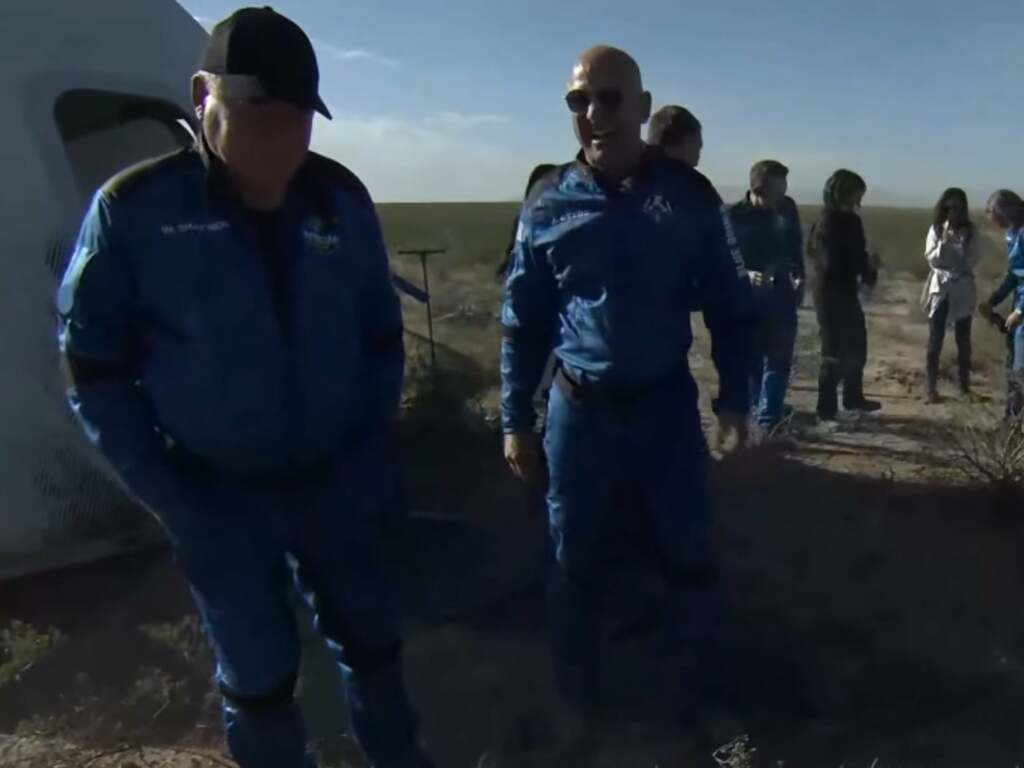 William Shatner turned fiction into reality on Wednesday when he launched into space, decades after his reign as Captain Kirk in the 1966 “Star Trek” series.

The attention, however, was soon turned to the incredibly awkward moment when Amazon founder Jeff Bezos cut off an emotional Shatner to try start a champagne spray party.

When the capsule came back down to Earth in Texas, Jeff Bezos opened it up to ensure everyone aboard was okay. On his return, Shatner summed up his lifelong dream as “it’s fun.”

The Canadian actor then told Bezos: “Everybody in the world needs to do this – it was unbelievable.”

“What you have given me is the most profound experience. I’m so filled with emotion about what just happened. I hope I never recover from this. I hope I can retain what I feel now. I don’t want to lose it”, he added.

As Shatner continued to open up about his profound experience in space, Bezos decided to cut him off mid-speech to pop the champagne.

Plz enjoy this moment of William Shatner trying to describe his life-changing experience in #BlueOrigin and Jeff Bezos ignoring him to spray a woman with champagne pic.twitter.com/47yKp6GZhg

Shatner looked a bit miffed at being cut-off and ignored - and pointedly turned down some bubbly when offered by the space-loving billionaire.

Social media erupted into a frenzy after experiencing the “cringe-worthy” interruption.

One tweeted: “Massively awkward moment there, as Shatner starts telling Bezos about how profound space was, but all Bezos wants to do is open some champagne.”

“Watching William Shatner having a poetic moment in the middle of a load of billionaires popping champagne is so fascinating”, another added.

“I was watching that part cringing”, another user noted. “This man has had a transformative experience and you want to spray champagne? Ugh. And @MandaEdge I was thinking that same thing as she made SURE she was in that camera shot.”

Wow, this is awkward.

William Shatner trying to describe his experience, trying to find the right words.

Massively awkward moment there, as Shatner starts telling Bezos about how profound space was, but all Bezos wants to do is open some champagne. #BlueOrigin

Bezos didn’t seem particularly interested in listening to Shatner’s profound words; he seemed more concerned about popping the champagne. He even walked away at one point when Bill was in full flow. Quite staggering and really awkward! #BlueOrigin

Just watched William Shatner launch into space and land. When he came out it was so awkward because he didn't want to partake in the champagne shower celebration. He wanted to talk. Jeff Bezos looks like he wants to get away from him as he talks and talks... #BlueOrigin #Space

Jeff Bezos aired shatner and it looked so awkward lmao

Shatner was moving. Bezos came off as an awkward, uncaring tool.

I just watched Jeff Bezos cut William Shatner off midway through his very first thoughts on what going to {nearly} space was like, to spray a bottle of fucking champagne. It was so awkward.

The 90-year-old actor made history as the oldest person to take off into space aboard the Blue Origin sub-orbital capsule developed by Bezos.