Autocracy, not giggling, is the problem 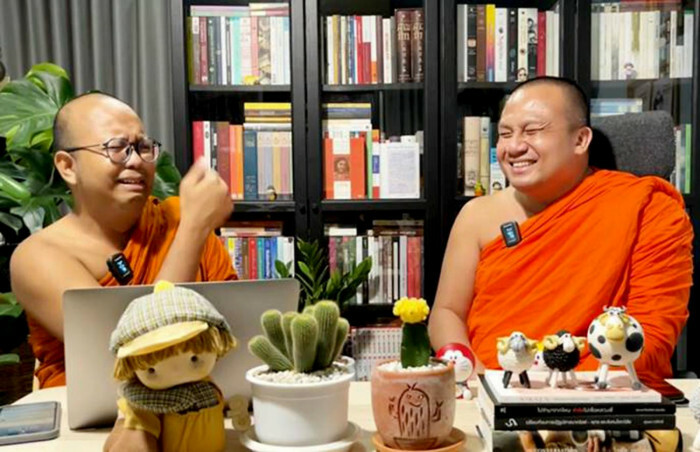 When two influencer monks -- Phra Maha Praiwan Worawano and Phra Maha Sompong Talaputto -- were summoned to Government House last week for giggling too much in their dhamma talk shows, I expected intellectual duels between the conservatives and the liberals on the monastic codes of conduct and the clergy's need to catch up with times.

What a letdown! The meeting turned out to be just like casual bargaining in a wet market.

Officials: "Reduce your giggling to 30% and increase religious content to 70%, okay?"

Don't bother asking who is going to monitor the 50-50 deal and how to do it. Who cares? The goal is reached. A happy ending Thai-style. A compromise without having to discuss principles and core problems in Thai Buddhism.

The storm in the teacup is over. But the clergy's authoritarian monolith that has frozen Thai Buddhism in the feudal past remains intact. So does political control over the clergy to silence outspoken monks to protect the powers-that-be.

The controversy arose when the two famous monk preachers teamed up to live stream their funny talk show on Facebook last week. They peppered the talk with amusing exchanges, giggles, jokes, LGBT slang, gibberish, and moral messages. Logging more than 200,000 viewers in their first collaboration, the show became a sensation overnight.

Liberals praised them for using online technology to reconnect with young people, especially the LGBT community which is normally despised by the mainstream clergy.

But the conservatives are furious. Monks who act like comedians violate the monastic code of conduct, tarnishing monks' respectable image, they charged. At issue, in particular, is Phra Maha Praiwan's continuous giggling.

If any monks cannot follow the strict code of conduct of the Theravada tradition in line with the Buddha's original teachings, get out, they asserted. They also want the clergy's governing body, the Council of Elders, to punish Phra Maha Praiwan and Phra Maha Sompong for their "mischief".

Does this sound familiar? If you don't submit to the Nation-Religion-Monarchy national ideology and follow state mandates, you are not Thai. Get out of this country. If you don't change, then face the music.

Phra Maha Sompong has long been famous for his funny dhamma talks. No problem about his light-hearted approach until early this year when he criticised the government for Covid-19 mismanagement and its decision to buy arms instead of effective vaccines.

Phra Maha Praiwan, a well-known social commentator, is also critical of the government's hard-line policy towards young protesters. Like Phra Maha Sompong, he also got a warning from religious authorities for his political outspokenness.

He said he decided to switch from his former academic self to live stream light-hearted dhamma talks because he wanted to lighten the public mood amid the pandemic and to connect to the young generations.

While using teenagers and LGBT slang has given him fame overnight, his making fun of Thai politics probably enraged the government's supporters all the more.

"Monks must not interfere with politics" is the mantra to silence politically outspoken monks including Phra Maha Sompong and Phra Maha Praiwan. Yet, the clergy submits to state power to maintain the elders' power and privileges.

Thai Theravada Buddhism is true to the original teachings so monks here must follow strict monastic disciplines and maintain serenity, the elders insist. But is this mere hypocrisy?

The Buddha prohibits monks from touching money. Yet monks getting rich from temple donations is the norm, not the exception.

The Buddha left his palace to live a homeless life. The Sangha he created was egalitarian. He also allowed female ordination. Yet Thai monks live in palace-like temples, seeking wealth and power in a hierarchical, feudal system that looks down on women and LGBT people.

Maintaining a solemn appearance is only a front to keep the public image. Taking issue with monks giggling and joking is just a tactic to make them look purer.

This obsession with "purity" is also why the cleric elders prohibit monks from driving or riding motorcycles. They insist the Buddha prohibited monks from using vehicles. Yet, high-ranking monks use chauffeur-driven luxury cars and no longer do the morning alms rounds although it is the Buddha's practice.

The Buddha actually allowed changing minor rules to adjust with the times. But the elders decided not to make any changes. Power, not purity, is the reason why.

Young monks are not allowed to initiate change because the elders need to protect their top-down authority and the power structure that is the source of their power and privileges. Disobedient monks are punished by being blacklisted and excommunicated.

Mind you, the preacher duo is not the first to be lambasted for breaking the sleep-inducing sermon tradition.

When Phra Buddhadasa, the late reformist monk, started giving dhamma lectures from a podium, traditionalists attacked him ferociously. His questioning of rituals and forms over essence and his openness to Zen Buddhism also made him the target of criticism from traditionalists.

Phra Payom Kayalano has also become a national household name because his sermons make people laugh. Meanwhile, many monks in the countryside routinely use humour to spice up their sermons.

Yet, the elders insist tradition must be upheld; monks should sit on traditional pulpits to give sermons. They should also hold palm leaf manuscripts or monks' fans while preaching in even, monotonous tones.

Thai Buddhism is in a crisis. The archaic system has become irrelevant not only to young people. Serious practitioners now often bypass monks to seek lay teachers for spiritual guidance via the internet. Monks end up being postmen to send merit to deceased relatives. Temples become places for rites and rituals and to bribe gods to grant one's wishes.

Of course, there are still monks who are meditation masters. They command large followings because they are living proof that spiritual practice still works in a complex world. Yet, in line with the Theravada tradition, these masters only focus on the path to inner peace, separating themselves from social suffering and an abusive political system that breaks people's spirits and pushes them to seek solace in religion.

Many monks want to fill the gap. Buddhism teaches the ways to get out of suffering. So they want to address the social and political structure that makes people suffer. But the power structure supports the authoritarian clergy. The monks who challenge the status quo then need to be silenced.

To survive in a complex world marked by diversity, the clergy needs to answer the different needs of different groups. The top-down monolithic clergy that prescribes only uniform solutions for the masses no longer works. Neither does siding with abusive powers.

The clergy does not care to change; they don't want to lose state privileges. Therefore, ridding them of these privileges will force them to change and return to the people. Separation of the state and religion is the key. Only then the clergy will start working hard to restore public faith and support.

Only then will monks like Phra Maha Sompong and Phra Maha Praiwan be free to revitalise Thai Buddhism and giggle as much as they like.