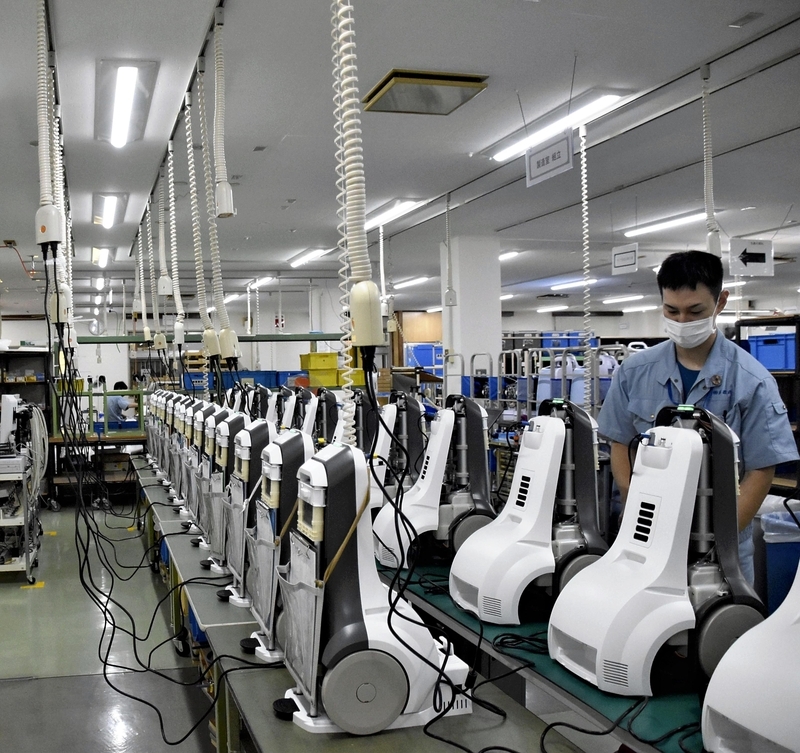 Due to the sharp rise in the number of COVID-19 patients recuperating at home, there are growing concerns about a shortage of oxygen concentrators for people who become severely ill.

In some areas, the devices are already out of stock. Demand for oxygen cylinders is also growing due to increasing calls for ambulance transport amid the pandemic.

Oxygen concentrators remove nitrogen, which accounts for about 80% of the air, increasing the oxygen concentration to about 90%. A doctor's order is needed to obtain one.

"It's difficult to secure an oxygen concentrator, even if a patient's symptoms worsen," said Junichiro Toya, 56, director of Sakura Shinmachi Urban Clinic. Staff from the clinic visit coronavirus patients recuperating at home in Setagaya Ward, Tokyo.

In mid-August, a male patient in his 30s whom Toya was visiting at home took a sudden turn for the worse. Toya immediately contacted several suppliers of concentrators, but none had any left in stock, so he had to give the patient an anti-inflammatory steroid drug used in treating COVID-19 patients to ease his symptoms.

Fortunately, the man was hospitalized the following day, but there have been several more cases since then in which the clinic could not immediately provide concentrators to people who needed them, according to Toya.

"COVID-19 patients' condition can abruptly deteriorate," said Toya. "If they're not given oxygen when they need it, their situation could become critical."

The Tokyo metropolitan government has so far secured about 500 concentrators, which have been lent mainly to patients recuperating at home at the request of medical facilities and health centers.

However, in mid-August, when the number of patients recuperating at home reached the 20,000 level, it had almost no units left in stock.

In Chiba Prefecture, currently more than 10,000 people are recuperating at home. The Chiba prefectural government is aiming to secure about 200 concentrators, but as of Monday, it had only obtained 35 units because some makers and suppliers are out of stock.

Some manufacturers have stepped up production in response to this situation. Starting in August, Osaka City-based medical equipment manufacturer Air Water Inc. increased its production capacity for the device at its subsidiary Ikiken Co. in Sayama, Saitama Prefecture, raising it 50% compared to the previous year.

In an administrative notice dated Sept. 2, the Health, Labor and Welfare Ministry provided information to local governments about how to efficiently use concentrators. In general, leasing companies collect a concentrator every time a patient finishes using it, to disinfect and store the device for about two weeks until the virus disappears from it completely.

However, experts have concluded that a device can be used immediately by just replacing the part that the previous patient wore in their nose and disinfecting the unit's surface.

"If it's used only among COVID-19 patients, the infection will not spread to others. Oxygen administration should be prioritized, as this is a matter of life and death," said an official of the ministry's Health Policy Bureau.

Demand is also growing for medical oxygen cylinders to be used in ambulances.

According to Chiyoda Co., a Tokyo-based manufacturer and distributor of such cylinders, its supply to Tokyo fire stations rose 30% in August from the previous month. This was caused by an increasing number of cases in which patients in ambulances needed to receive oxygen for a long time, because there was no hospital able to admit them.

Chiyoda is responding to the current situation by shortening the time for collecting, filling, loading and delivering oxygen cylinders.

"We'll do our best to ensure a stable supply of cylinders," said an official in charge.