Author of bestselling crime novel at the age of 11 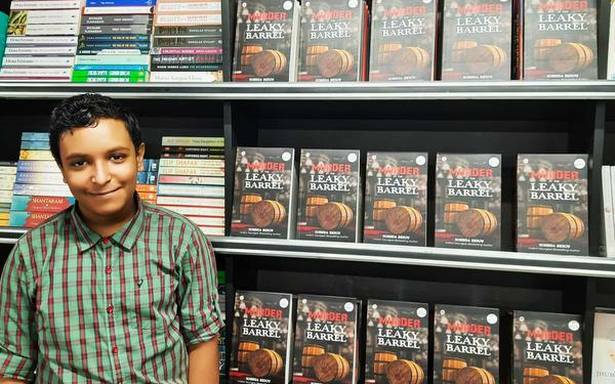 At the age of 11, Joshua Bejoy is the author of a best-selling crime thriller on Amazon Kindle Store in Children’s Crime and Thriller category. Murder at the Leaky Barrel, the first novel of the Class 6 student, currently tops (Kindle edition) in the U.S., U.K., Australia, India and Canada.

Joshua’s novel in English, which kindles curiosity and suspense, was on the top seller list on the very first day of its release to make him the youngest Indian to have a best-selling novel to his credit. It was published by Booksthakam, a group of Malayali writers.

Son of Suma Sunny, a freelance journalist from Vynthala, near Mala, and Bejoy Thomas, Associate Professor at the Indian Institute of Science Education and Research (IISER), Pune, from Kottayam, Joshua used to scribble poems and stories from a very tender age.

“He was reluctant to show his works to anyone. He used to say that he writes for his own pleasure,” says his mother.

Joshua started writing ‘Murder at the Leaky Barrel’ during the lockdown. It took seven months for him to complete.

“Friday the thirteenth. Halloween night. 1532, Dublin, Ireland. After a night out in a bar, Edward Brown is returning back home, where he was murdered. Five centuries later, on Halloween, he has woken up from his sleep, a thought to get revenge in his mind.”

The novel happening in an Irish background is progressing with vengeance and the investigation into it five centuries later. The plot, very unlikely by a 11-year-old writer, has the potential to hook any crime thriller fan.

A sixth standard student of Ryan International School, Pune, Joshua has been a passionate reader of books of Roald Dahl, J.K. Rowling and Gerald Durrell.

“I have online classes during the day. Then there will be lots of homework too. So, I spent two or three hours writing in the light, says Joshua.

“You need a natural knack for writing. If you have that warmth when you write, your readers will feel that passion. From there your words will take your readers to the imaginary world you created in the book, “the young writer talks about the skill of writing.

Joshua says his parents, who are voracious readers, inspired him to dive into the world of letters. “My mother is my main motivator. She inspired him to publish the work.” The family is now settled in Pune.

Currently it is on the top of Amazon Kindle Hot New Release category in the U.K., Australia, India, U.S. and Canada. The paperback of the book is also available now. Joshua has almost completed two more books. They are in different genres.

Current Books is planning to bring Murder at the ‘Leaky Barrel’ in Malayalam,” says Suma.