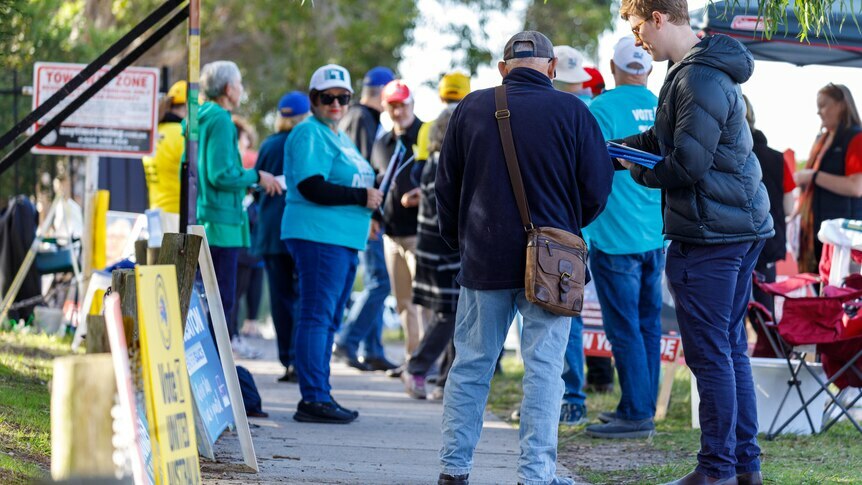 Federal election: More than 300,000 Australians cast ballots in first-day pre-polling - as it happened
Monday marked the beginning of pre-polling across the country, and early numbers further strengthened officials' predictions the 2022 election will…

While they are not agreed on the future of Australia's energy landscape, our panellists see climate policy as an election…

Discussion of climate policy may be conspicuously absent this federal election campaign, but Google search data suggests the warming of the planet is weighing on voters' minds — at least more so than in 2019.

Catastrophic, climate-fuelled bushfires and floods have seen Australians asking Google what it's all about, experts say.

This data is normalised, meaning interest has increased relative to that of other topics. More people using Google doesn't explain why it's gone up.

So, does the data on what millions of Australians are asking Google give us special insight into voters' collective concerns? Is climate change a bigger concern for voters this election?

For the past year and a half, social researcher Rebecca Huntley has been conducting focus groups to understand the varying levels of concern with climate change among Australians.

"What we are seeing is people registering the unprecedented impacts of climate on the world today," she said.

The basic theory as to why this is happening now rather than, say, three years ago, is "stuff builds up".

First, there were the 2019/20 Black Summer fires. These were not enough on their own to "shift the dial" on climate concern, but they were followed by two other major events, Dr Huntley said.

One was the November 2021 COP26 climate conference in Glasgow that saw Australia criticised for inaction on climate change, including a net zero plan that was vague with details.

The other was the 2022 floods in Queensland and New South Wales.

While it's not yet possible to pin that individual weather event on climate change, it was consistent with predictions of the type of natural disaster we can expect to see more of under global warming scenarios. Basically, it was what climate change looked like.

"And suddenly it became a theme," Dr Huntley said.

"I genuinely think that the reason why you're starting to get people googling this stuff more is the fires, the floods, and the seemingly inadequate response of the federal government to that."

Is big data a window into our collective concerns?

But the search data is more than just another poll, Dr Huntley says.

It shows that climate change and the threat it poses is registering on a broad, grassroots scale with "middle Australia".

"These are people who may have never had a conversation about climate change with a friend or family member," she said.

The idea that digital big data can give a window into cultural and social trends is known as "culturomics".

The basic idea is that we lie to surveys, even when they're anonymous, because we want to look good (this is called social desirability bias).

But certain online sources get people to admit things they would not admit anywhere else. And one of these is Google searches.

Culturomics has been used for climate change before. A 2018 Australian study estimated awareness about climate change around the world using each country's Google search volume data.

Carla Archibald, a co-author of the study, said Google search data can help researchers understand and track the broad level of public interest in a topic such as climate change.

"Google searches can be used as a barometer … to measure communities' awareness of climate change," said Dr Archibald, who is now at Deakin University.

"We can learn about society's collective questions or concerns by summarising the frequency or sentiment of Google search terms."

Australia, by the way, already ranked high for awareness of climate change in that study.

In the intervening years, the latest search data would seem to suggest that awareness has gone right up.

Climate change 'not a topic that comes up at the bar'

So who's quietly googling about climate change? The list of the top places searching the topic may give us some insight.

The results are dominated by towns and townships with tiny populations, which suggests the rankings may not be totally reliable (it could be skewed by one family, for instance).

But, at the very least, the search data shows that some people in these areas are curious enough about climate change to ask Google.

At the top of the list is Koetong, a one-pub township in north-east Victoria with a population of 20.

The co-owner of the pub, Shelley, was surprised to learn Koetong had come top, given climate change was not something people talked about much when they were out in public.

"Maybe it has something to do with the bushfires."

The locality was evacuated in January 2020 and narrowly avoided the firefront that destroyed dozens of nearby homes.

Sixth on the list of top places googling climate change is Toobeah (pronounced "two beer"), a one-pub inland rural town of 191 people in Queensland, near the border of New South Wales.

Locals there were also mystified by the ranking.

"I wouldn't say it was a topic that comes up at the bar," one man said.

Lawrence Springborg, mayor of the local Goodiwindi Shire and president of the Queensland Liberal National Party, proposed people were searching "because they don't believe" climate change and wanted ammunition to disprove the science when the topic came up in conversation.

"I have absolutely no idea why they're searching," he added.

Another reason may be the recent floods, and expert predictions that a warming atmosphere will make this type of natural disaster worse and more frequent for parts of Queensland like Toobeah.

Climate change may not be a topic at the bar, but it's having an impact.

Across Queensland, a state that's known for electing politicians that question the scientific basis of climate change or campaign against action to reduce emissions, search interest in climate change has increased 43 per cent since the last federal election.

The divisive legacy of the climate wars

So Australians are googling climate change, even if they're not talking about it.

And in areas where they're talking about it least, they may be googling it even more than elsewhere.

"Maybe they can ask Google when they can't ask their neighbour," Dr Huntley said.

"It's not a surprise to me that people in small farming communities, where they don't necessarily feel like they can have this conversation at the pub, are places where people are googling it."

In late 2021, she conducted dozens of interviews with farmers around NSW affiliated with Farmers for Climate Action, a movement of rural Australians who want more progress on climate change.

Dr Colvin found that the 2019/20 Black Summer bushfires (this was before the recent floods) had been a catalyst for people in rural areas of NSW to talk about "this thing called climate change".

But the topic still had to be treated with caution.

"This was described as a legacy of the way climate change has been politically and socially divisive in the past," she said.

The surprised reaction of people in areas like Koetong and Toobeah was "quite in line" with the results of her own research, she said.

"It shows how important it is we find a way to talk productively about these contentious issues.

"There's this gap between what are we thinking about versus what we think is socially acceptable to talk about."

Federal election: More than 300,000 Australians cast ballots in first-day pre-polling - as it happened
Monday marked the beginning of pre-polling across the country, and early numbers further strengthened officials' predictions the 2022 election will…

While they are not agreed on the future of Australia's energy landscape, our panellists see climate policy as an election…