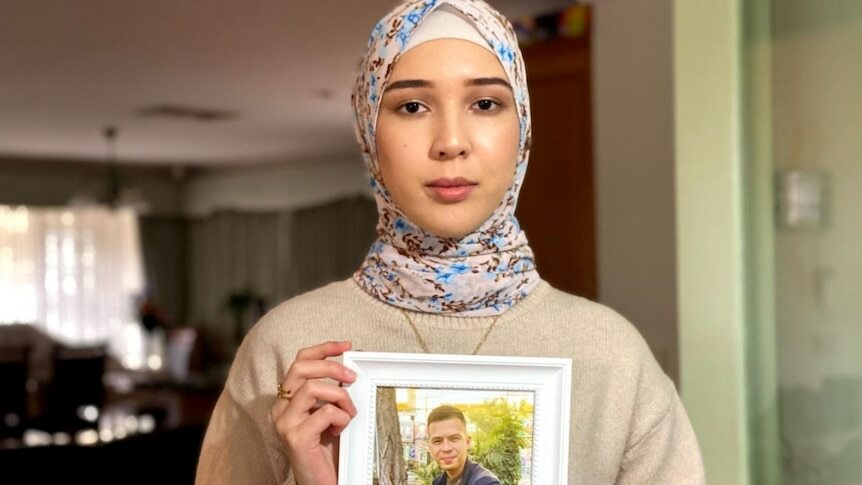 Chinese authorities are arbitrarily detaining and torturing Muslim minorities, including the husband of Melbourne woman Mehray Mezensof, the Uyghurs Tribunal, an independent people's tribunal based in the UK, has heard.

The quasi-legal proceedings are investigating "China's alleged genocide and crimes against humanity against Uyghur, Kazakh and other Turkic Muslim populations".

The ABC reported in April that Ms Mezensof's husband Mirzat Taher had been sentenced to 25 years in prison for alleged separatism.

Ms Mezensof confirmed to Hamid Sabi, counsel to the Uyghur Tribunal, that Mr Taher had been subjected to "tiger chairs", had been "psychologically abused", and had experienced seizures due to his treatment at the hands of Chinese officials.

Tiger chairs — steel chairs with handcuffs and leg irons — are known to be used by security forces across China.

"Kneel and praise China, or starve", was how Sir Geoffrey Nice, chair of the proceedings, summarised Ms Mezensof's description of how detainees were required to pledge loyalty to the Chinese Communist Party.

'No evidence' against Ms Mezensof's husband

Mr Taher had been targeted by Chinese officials because of his time spent overseas in Muslim-majority countries such as Turkey and Malaysia, Ms Mezensof said.

"They want to keep us secluded from the outside world," she told the Tribunal.

Ms Mezensof said her husband had been sentenced by a Chinese judge, but was not sure whether it was a proper legal procedure or show trial.

The prosecution rate in China averages more than 99 per cent, observers say.

"There is absolutely no evidence against my husband," Ms Mezensof said.

More than 21,000 people have signed an Amnesty International petition to release Mr Taher from detention in Xinjiang.

Chinese state media has dismissed the Uyghur Tribunal as "ironic and ridiculous" and showing "no respect to 9/11 terror victims".

Beijing claims its widespread crackdown on Muslims in Xinjiang is part of combatting terrorism.

"The so-called tribunal was set under the conclusion of anti-China forces from the US and the West," Xinjiang official Xu Guixiang was quoted as saying.

In June, more than 40 countries called for China to allow the United Nations' human rights chief access to Xinjiang to investigate allegations of mass incarceration and other human rights abuses.

Human Rights Watch has accused Beijing of crimes against humanity in regards to its treatment of Uyghurs and other Muslim minorities.

Several Australian citizens are listed as "suspected terrorists" in documentation previously uncovered by the ABC.

The Department of Foreign Affairs and Trade, the Chinese Foreign Ministry and China's embassy in Australia have been approached for comment.