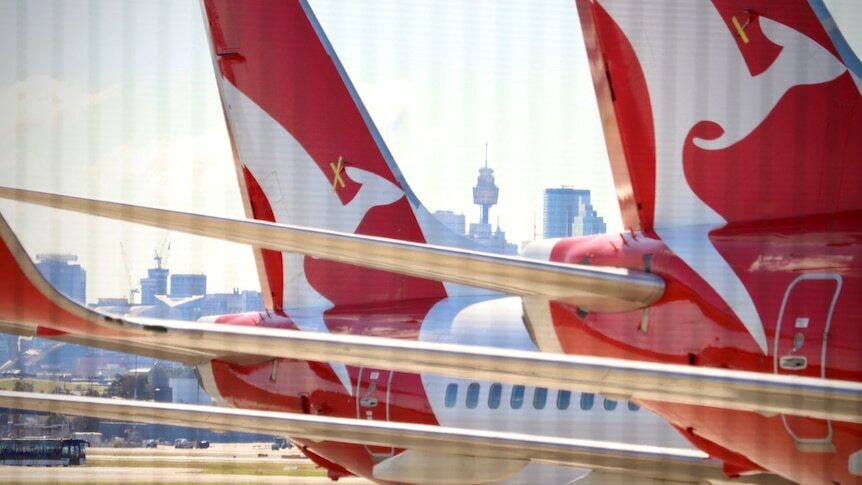 Despite struggling for direction throughout the day, Australian shares have managed to finish trading slightly higher.

The benchmark index briefly dipped into negative territory in the opening and the final hours of trade, as investors stayed cautious ahead of official job figures which will be released by the Bureau of Statistics on Thursday.

The local share market shrugged off a weak lead from Wall Street, which closed moderately lower on Friday (US time).

Both the Dow Jones and S&P 500 indices lost 0.8 per cent, having dropped for five days in a row. The tech-heavy Nasdaq dipped 0.9 per cent.

Australia's competition watchdog has denied authorisation for Qantas and Japan Airlines (JAL) to coordinate flights between the two countries, citing competition concerns as international travel is set to resume.

Australian Competition and Consumer Commission (ACCC) chairman Rod Sims said the regulator was not satisfied that the public benefits of the proposed joint business agreement would outweigh harm to competition.

"Preserving competition between airlines is the key to the long-term recovery of the aviation and tourism sectors, once international travel restrictions are eased," Mr Sims said in a statement.

The agreement, which would have allowed the airlines to coordinate fares and schedules, would make it very difficult for other airlines to operate on routes between Australia and Japan, the ACCC said.

Japan's ANA Holdings is the only other airline that flies non-stop between Japan and Australia.

"Virgin Australia told the ACCC that it would be more difficult to enter the Australia-Japan route if it is required to compete with Qantas and Japan Airlines acting jointly rather than as individual competing airlines, " the regulator added.

After a negative draft decision by the ACCC in May, Qantas had offered to commit to a new service between Cairns and Tokyo once demand thresholds were reached.

Qantas and JAL expressed disappointment with the ACCC decision in a joint statement on Monday, though they said they would continue their codeshare arrangements and oneworld alliance partnership.

Qantas domestic and international chief executive Andrew David said the decision was unfortunate for Cairns, because without the ability to coordinate with JAL, the planned Tokyo flights would not be commercially viable.

JAL senior vice president Ross Leggett said the joint venture with Qantas would have accelerated the recovery of leisure and business traffic between Japan and Australia.

However, a few items of economic news may move the currency this week.

On Tuesday, Reserve Bank governor Philip Lowe will give a speech to the Anika Foundation, titled "Delta, the Economy and Monetary Policy".

"We expect this speech to provide more colour on September’s policy decision to taper asset purchases and has the potential to move the Australian dollar," said Commonwealth Bank currency strategist Kim Mundy.

On Thursday, the ABS will release its keenly-awaited August jobs report, which will reveal the impact of lockdowns across the nation.

Economists, polled by Reuters, are expecting the unemployment rate to rise to 4.9 per cent, up from 4.6 per cent, with 80,000 jobs to have been culled.

CBA is one of the more pessimistic forecasters. It is predicting that unemployment will jump to 5.2 per cent, with 300,000 roles shed.

"The rise in the unemployment [rate] will be cushioned by a falling participation rate in our view," Ms Munday said.

"The labour data will primarily reflect the impact of NSW’s lockdown. Victoria’s lockdown will show up in September’s data.