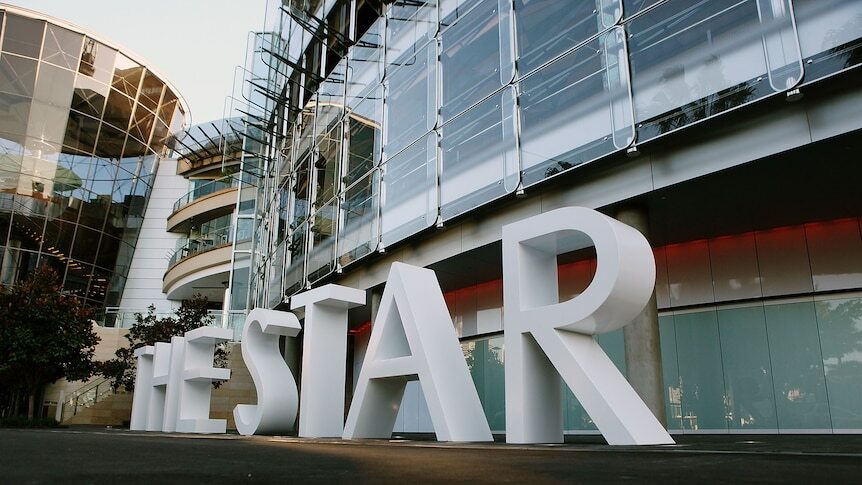 The Australian share market has fallen, after losses on Wall Street on Friday, with casino stocks taking a dive.

Shares had been deeper in the red earlier in the session but pared back their losses as mining and banking stocks turned positive.

The worst-performing stock on the benchmark index was casino operator The Star Entertainment Group.

Its shares dropped 23 per cent to $3.30 after it responded to media reports, which it described as "misleading".

In a statement to the stock exchange, The Star said it "was concerned by a number of assertions within the media reports that it considers misleading".

"There are constraints on publicly discussing specific individuals. We will take the appropriate steps to address all allegations with relevant state and federal regulators and authorities," the company said.

The Star Sydney casino is currently being reviewed by the New South Wales Independent Liquor and Gaming Authority.

That's despite the Fair Work Ombudsman announcing it has launched court action against CBA and CommSec for underpaying nearly 7,500 workers to the tune of $16.4 million.

The FWO said CBA had notified it of the contraventions in 2019 after a company-wide compliance review.

"We allege that CBA and CommSec failed to meet their lawful obligations to ensure employees were better off, overall, which led to thousands of CBA and CommSec employees across the country being financially disadvantaged year after year," Fair Work Ombudsman Sandra Parker said.

The Federal Court proceedings allege staff were paid less than their lawful entitlements between October 2015 and December last year.

In a statement, CBA acknowledged the proceedings and said "any instance of employees not being paid their correct entitlements is unacceptable".

It said systems and processes had been strengthened in the two years since it had reported the issues to the FWO.

The bank is in the process of paying back staff, which it says is "substantially complete".

In December 2019, CBA revealed it had repaid around $28 million to 41,000 people identified in its review of employee entitlements dating back to 2010, and expected to pay a further $25 million in back-pay plus interest.

The FWO is seeking penalties against CBA and CommSec.

Last week, Woolworths settled a class action brought against it over underpayments and said it would pay around $50 million to staff.

Most sectors of the local share market lost ground, led by the consumer, health care and real estate sectors.

However, the energy sector was on the rise as oil prices continued to climb.

Last week, the price of US crude topped $US80 a barrel for the first time since 2014.

Z Energy shares hit an 18-month high in New Zealand trade after its board recommended the deal to shareholders.

The Australian dollar was buying around 73 US cents.

Last week, the local share market snapped its four-week losing streak, while the major US indices also made weekly gains, despite falls on Friday.

US shares fell after the monthly non-farm payrolls report showed job creation in America had slowed to a nine-month low in September.

However, some analysts say that it is unlikely to change the US central bank's trajectory for easing back pandemic stimulus measures.