Australia’s prime minister, Anthony Albanese, has pledged more than A$100m in fresh military aid for Ukraine, after visiting the sites of some of the most infamous atrocities of Russia’s war during the final leg of a European tour.

Albanese visited Bucha, Hostomel and Irpin, three towns in the Kyiv region that became synonymous with the brutality of Vladimir Putin’s invasion when evidence of mass killings and torture was uncovered after the withdrawal of Russian forces.

The governor of the Kyiv region, Oleksii Kuleba, announced the visit on Facebook, saying Albanese had been shocked at what he saw, including bombed-out homes, traces of mines and a destroyed airport.

Photos posted on Kuleba’s Facebook page showed Albanese and others walking past a residential building with bombed-out windows, and standing in what appeared to be a ruined aircraft hangar.

He also announced a ban on Russian gold imports, as well as sanctions and travel bans on 16 more Russian ministers and oligarchs, bringing the total number of Russian individuals sanctioned by Australia to 843.

“I saw first-hand the devastation and trauma it has inflicted on the people of Ukraine,” the PM said in a statement following his visit.

“My visit to Kyiv and recent visits by other world leaders sends a clear message that democratic nations like Australia will stand side-by-side with the Ukrainian people in their time of need.”

Australia also intends to intervene at the International Court of Justice in support of Ukraine in its case against Russia.

Albanese tacked on a day visit to Ukraine at the end of his European trip for the NATO summit. The Australian government had kept the trip under tight wraps for security purposes, with only a small pool of journalists allowed to travel with him to Ukraine, and a media blackout imposed on Australian media until he had left the country.

However, international media and Ukrainian officials reported details of the trip earlier, before Albanese’s office released a statement about 6.30am AEST on Monday.

“I sincerely thank President Zelenskyy, the Armed Forces of Ukraine and the Australian Defence Force for ensuring the safety of my visit,” Albanese said.

“President Zelenskyy’s leadership has rallied the Ukrainian people to defend their country and inspired the world to support humanity and freedom. The road ahead is hard but I am confident Ukraine will prevail.”

Albanese – the first Australian prime minister to visit Ukraine – is following in the footsteps of other western leaders including Boris Johnson, Emmanuel Macron, Olaf Scholz and Mario Draghi in going to the war-torn country. The head of the European Commission, Ursula von der Leyen, and the speaker of the US House of Representatives, Nancy Pelosi, have also visited.

According to Associated Press, Albanese described the destruction in Irpin as devastating. “These are homes and these are livelihoods and indeed lives that have been lost here in this town,” he said.

Ukraine’s ambassador to Australia, Vasyl Myroshnychenko, has called for more Bushmasters for Ukraine, but also praised Australia’s support. “Australia is punching above its weight,” he told Sky News last week. “There is a tradition of Australia standing up to bullying behaviour, and prime minister Albanese understands it really well.”

The Labor leader made the stop after meeting Macron in Paris to repair relations after a furious row when the former Australian prime minister Scott Morrison suddenly cancelled a longstanding multibillion-dollar submarine deal last year in favour of a UK-US agreement.

In Madrid, Albanese described the war in Ukraine as “a humanitarian tragedy” and “a challenge to the global rules on which our security and prosperity is based”.

He said: “Russia’s brutal invasion is causing severe economic disruption that is being felt right around the world including in Australia. Although we are far away geographically, Australians are paying Putin’s petrol prices. We are paying more for food and household items, because global supply chains have been disrupted by his illegal and unjustifiable invasion.” 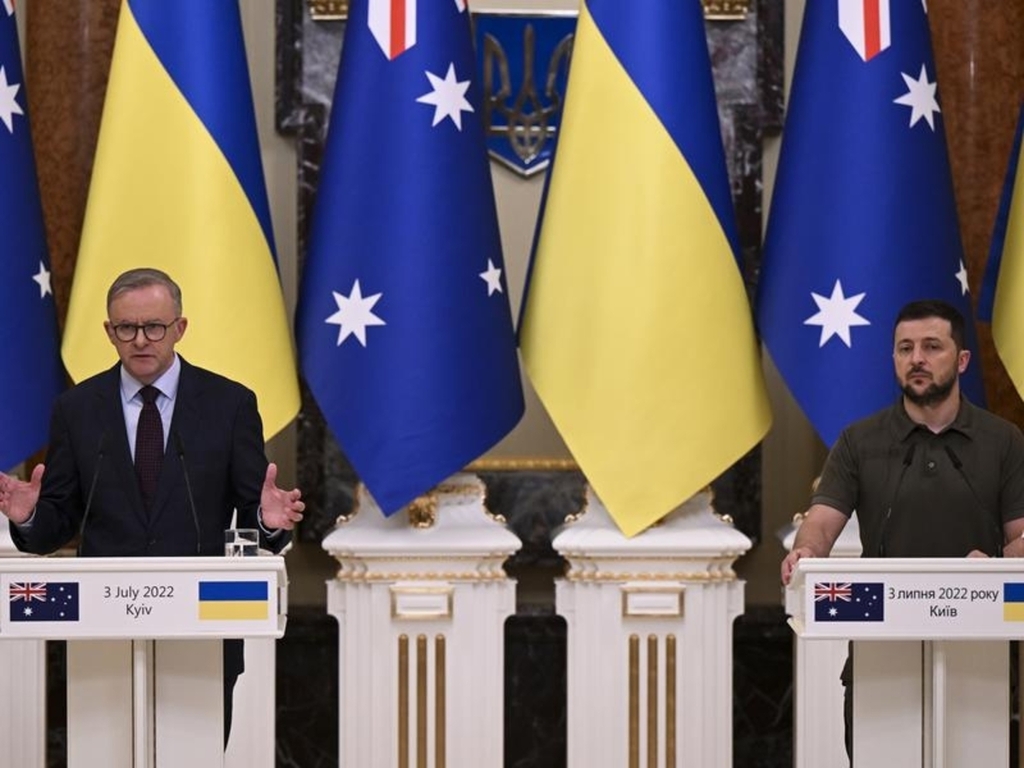 AAP
One subscription that gives you access to news from hundreds of sites
Australia will ban Russian gold imports, give Ukraine more armoured vehicles - PM