Australian foreign minister was told to close embassy before May visit to Kabul, documents reveal 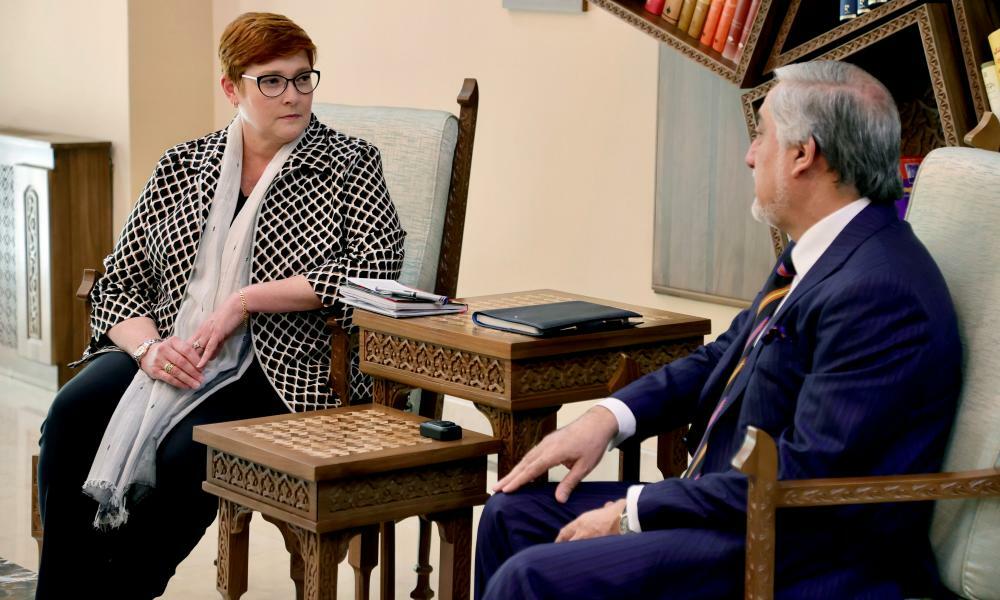 Defence and intelligence chiefs warned the Australian government multiple times in April the situation in Afghanistan could become dangerous enough to force the closure of the embassy, it has been revealed.

The Department of Foreign Affairs and Trade had been in talks with the Department of Defence since January 2021 about the “deteriorating security situation”, but the warnings about the diplomatic mission in Kabul were made shortly after the US announced plans to withdraw from Afghanistan.

The new timeline has sparked fresh claims the government should have moved more quickly to remove former interpreters and guards from the country which fell to the Taliban in August.

It also shows the Australian foreign minister, Marise Payne, received a formal recommendation from her department to close the embassy five days before she arrived in Kabul on 9 May for meetings with Afghanistan’s then-president Ashraf Ghani.

Dfat revealed the dates in a long overdue response to questions on notice from the last round of Senate estimates hearings, tabled on Friday.

The rapid fall of Afghanistan to the Taliban as coalition forces pulled out of the country has sparked recriminations in the US and the UK about whether the outcome could have been foreseen and how the withdrawal was handled.

Joe Biden announced on 14 April that US forces would leave Afghanistan before the 20th anniversary of the 11 September 2001 terrorist attacks, a plan that was matched by the Australian prime minister, Scott Morrison, a day later. Australia had just 80 troops still in the country at that time.

Dfat said Defence and the Office of National Intelligence “advised Dfat on a number of occasions in late April 2021 that closure of the mission might be required owing to the deteriorating security situation and the drawdowns of US and international forces and the ADF from Afghanistan.”

“Dfat recommended closing the Australian embassy, Kabul, in a submission to the minister for foreign affairs on 4 May 2021,” the department said.

It was previously known that the cabinet had formally made the decision to close the embassy on 13 May, with Payne joining the meeting remotely as she was in the US for talks with senior Biden administration officials.

But the new timeline suggests Payne would have been aware of the formal proposal to close the embassy when she arrived in Kabul on 9 May for meetings with Ghani and other senior members of the government that collapsed months later. Ghani fled in mid-August as Taliban forces closed in on Kabul.

A press release issued after Payne’s visit to Kabul said the minister had met with Ghani and the chair of the High Council for National Reconciliation, Abdullah Abdullah. She had “affirmed Australia’s support for the Afghanistan government and people during this time of change for the country”.

The Australian government proceeded to shut the embassy in late May – something that looked abrupt as it occurred only a few days after the move was announced – although ministers said they hoped to reopen it “once circumstances permit”.

When asked during Senate estimates whether she had raised the possibility of the embassy closure with counterparts during her trip to Kabul, Payne said: “Not in the specific sense.”

But Payne said she had “certainly indicated in my engagements the significant security challenges that lay ahead of posts like ours in Kabul”.

The Taliban’s rapid advance, culminating in the fall of Kabul in mid-August, prompted Australia and other allies to launch last-ditch military run evacuation operations in highly dangerous conditions.

On 17 August, Morrison said the government would “do everything we can for those who have stood with us” but added: “I want to talk openly to veterans that despite our best efforts, I know that support won’t reach all that it should. On the ground, events have overtaken many efforts. We wish it were different.”

Labor’s foreign affairs spokesperson, Penny Wong, said the new information showed the risks from the deteriorating security situation had been discussed as far back as January but the government “neglected to put a plan in place to help those who helped Australia”.

“The warnings were there,” Wong told Guardian Australia. “This represents yet another failure of foresight from Mr Morrison and his ministers.”

Wong said more could have been done earlier to expedite visas and get people to safety “but it was left too late”. “As a consequence, Australian citizens and visa holders – including local staff and interpreters – remain in Afghanistan and face a perilous situation. We are gravely concerned for them,” she said.

Wong called on Morrison to “take responsibility for those left behind, and come up with a plan to work with our American friends and other partners to help these people get to safety.”

The government has repeatedly defended its efforts to assist Afghan nationals who had helped Australia as translators, interpreters, guards, and other roles.

It says more than 430 Afghan locally engaged employees or their family members were resettled in Australia between April and mid-August.

ADF personnel then helped airlift about 4,100 people out of Kabul from mid to late-August in a mission that ended just before a deadly terrorist attack outside the Hamid Karzai International Airport.

The government has said the number rescued was much higher than initial expectations but has not revealed precisely how many are Australian citizens and how many are Afghan nationals.

Some interpreters who worked with the Australian and New Zealand militaries in Afghanistan said they felt abandoned by the governments they once served. One interpreter who worked for the ADF and held a temporary visa said he had spent five days outside the airport, sleeping in the dirt with his wife and young child.

Last week the chief of the ADF, Gen Angus Campbell, said he was surprised by the speed of Afghanistan’s collapse to the Taliban. But he said there had been “enough uncertainty about the security situation for a range of advice [to be] offered to government” about whether the embassy should close.

Dfat said it had carried out six internal reviews or assessments of the security of the embassy in Kabul since 2016, amid concerns about threats including “terrorism, insider attacks, and general violence”.