It was Labor costings day – and the party took a gamble with a pledge to deepen the deficit in order to invest in productive measures such as childcare. Scott Morrison demonstrated his bulldozer persona at a press conference, while one of his ministers blamed both sides for Wednesday’s tackle of a child playing football. And the government seized on new data showing unemployment had dropped to 3.9%, the lowest in decades.

Postcard from the Albanese campaign

Labor promised a “final sprint” of marginal seats until election day, but it started with a stumble after the opposition initially planned to send Anthony Albanese to campaign in Brisbane while his travelling press pack was sent to Canberra. The decision was met with fury on the campaign bus, with journalists upset at being split up from the prospective PM less than 48 hours from polls opening.

The decision was quickly reversed after reporters threatened to boycott Albanese’s morning press events, with some media types claiming it was an unprecedented plan. The bus went to Brisbane to see him hit marginal seats.

A mutiny averted, Albanese held another visit to a childcare centre in the marginal Sydney seat of Bennelong, joining kids as they painted. He asked a young girl what he should paint – she thought for a moment, replying “a big, big, big bear”.

Albanese responded “I’m going to draw a bunny rabbit”, whipping out a quick depiction (if hardly an impressionistic masterpiece) of his footy team’s mascot.

“There’s no ball sports so you won’t be tripping over anyone,” a staff member at the centre joked, with Scott Morrison’s run-in with junior football player Luca still making headlines (and memes) half a day later.

A flock of squawking cockatoos overhead interrupted Albanese’s press conference as he talked up his record of transparency and media appearances against Morrison’s for comparison.

Earlier he’d doubled down on last night’s criticism of the Coalition for making “fun of someone’s name in their advertising”, criticising the government’s main attack ads. After making the claim in an address to an Italian community event in Sydney, he repeated it in TV interviews and the presser, claiming the rhetoric “bothers members of the community”. It was a criticism Morrison shrugged off, calling Albanese “precious”.

Hopping up to Brisbane, Albanese held an event before his press bus even got there, meeting with the Queensland premier, Annastacia Palaszczuk, at a pre-poll booth.

A second pre-poll visit in Dickson – Peter Dutton country – saw Albanese reunited with several Labor candidates in Brisbane’s north to take selfies and rev up volunteers. He then held a quick presser in a nearby park to comment on Labor’s costings, which were announced in Canberra while he was on the road.

Albanese said his extra $7.4bn in spending wouldn’t be inflationary because the money – for reforms like childcare – “will produce a return that produces economic activity”.

He denied his campaign was “worried”, spruiking his visit to numerous Coalition-held marginal seats in attempts to win new MPs.

“I’ll see you in other non-held seats tomorrow across three states,” Albanese said.

Postcard from the Morrison campaign

Scott Morrison started the day at a tennis club in the tiny town of Whitemore in the Labor-held seat of Lyons in Tasmania.

Morrison had a hit of tennis with the Liberal candidate, Susie Bower, and a few children – another non-contact sport that this time, fortunately for all, involved no contact.

Courtside and in numerous radio spots, Morrison said he’d spoken to Luca Fauvette, the young football star he had bowled over in Devonport on Wednesday, and confirmed that he was OK.

“He came off better than I did,” Morrison said, eager to stress he landed on his shoulder (not Luca).

The next stop was Island Block and Paving, also in Lyons, where Morrison confirmed he would make a trip to Solomon Islands if re-elected, and faced a barrage of questions about the cost of living.

Confusion mounted about Morrison’s attempted self-reinvention, as he told 2SM being a bulldozer “helps get stuff done” and proceeded to bulldoze through numerous media questions asking about real wage cuts and what, if anything, he had really changed.

After visits to Braddon and Lyons, Morrison did not drop in on the most marginal Tasmanian seat of Bass, where the MP Bridget Archer has rebranded to use the colour purple, de-emphasising the Liberal party in her bid for re-election.

Instead, he flew to Sydney and went to Carnes Hill, south-west Sydney, in the Labor-held seat of Werriwa (5.5%).

Morrison did a second presser to boast about the unemployment rate – something he didn’t do after Wednesday’s dismal wages figures.

A “multicultural afternoon tea” in the community centre turned into more of a rally for the Liberal candidate Sam Kayal. Numerous young Liberals in blue shirts, shouts of “vote for Sam” and shouts of “shame” when Morrison spoke about unions wanting to control your superannuation rather gave away there weren’t many undecided voters there. Morrison was swamped for selfies, and then left to fly to Perth.

Labor costings: Labor says the party’s decision to post $7.4bn in higher deficits than forecast over the next four years was not “made lightly”, but the spending is necessary to grow the economy. As he released the costings on Thursday, the shadow treasurer, Jim Chalmers, said Labor had been through the budget carefully to identify savings to offset most of its proposed spending, which it has emphasised will help boost productivity.

Pandemic powers: Experts have denounced a “totally misleading” claim perpetuated by government MPs and the United Australia party that the World Health Organization will use a possible pandemic treaty to control Australia’s health system, including to arbitrarily impose lockdowns.

Taking stock: It’s been a marathon campaign but the finish line is in sight. Over the past couple of months Guardian Australia reporters have fanned out in marginal seats to try to capture the mood and dynamics of the 2022 election. The result of this exercise has been the illuminating Anywhere But Canberra series.

Jingle jangle: This week, as the campaign period draws to a close, we asked Dr Andrew Hughes, a political marketing lecturer at the Australian National University, and the University of Canberra’s Dr Chris Wallace, to talk about the best and the worst advertisements of this election. Both swiftly picked the one they hated the most: the Coalition’s holey bucket. But will it work?

There was a high five afterwards, so it was just an error from both of them

The number of people who worked reduced hours in April because of illness, almost double what was normal in the April before the pandemic, the Australian Bureau of Statistics said.

Labor has released its policy costings, revealing a $7.4bn increase in the deficit over four years if elected. Political editor Katharine Murphy joins Jane Lee to discuss the political risks and consequences involved. 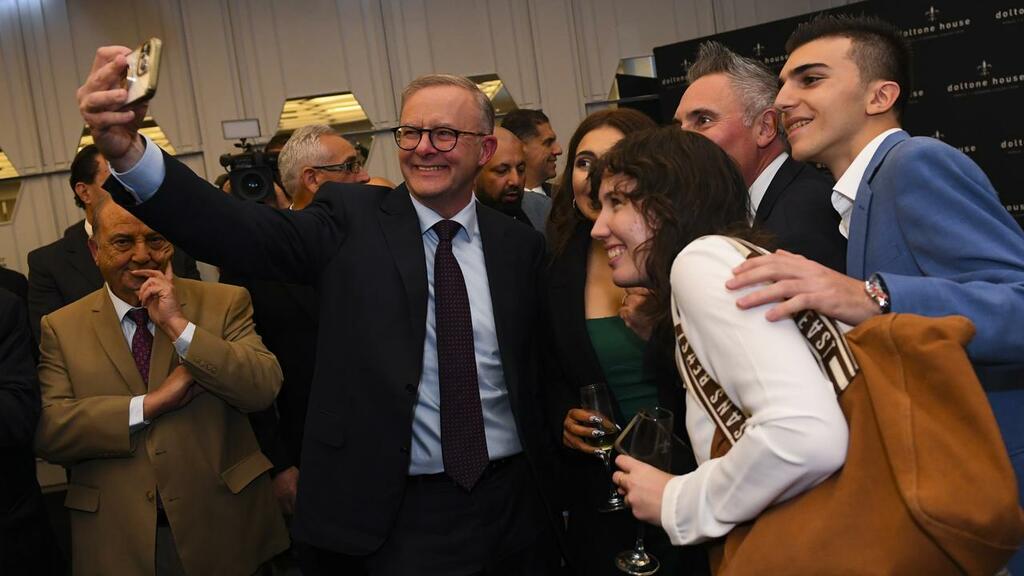 Crikey
One subscription that gives you access to news from hundreds of sites
Australian election briefing: Scott Morrison bulldozes a kid while Anthony Albanese takes the stage

It’s the final day of the campaign — thank God for that.