Australian-born judge released from immigration detention in Kiribati, after being held overnight

Kiribati’s Australian-born high court justice David Lambourne was released from immigration detention on Friday night, with the government belatedly complying with an order from the country’s court of appeal.

The court had ordered Lambourne’s release on Friday morning, after he was detained on Thursday following the government’s unsuccessful attempt to deport him, contrary to court orders.

Lambourne is a long-time Kiribati resident and was formerly the Pacific nation’s solicitor-general.

He remained detained for much of Friday, before being finally permitted to leave in the evening. The Guardian understands that the Kiribati government is in discussions with Solomon Airlines about deporting Lambourne on Sunday, on its next flight out, after Fiji Airways refused to board the judge on Thursday. The court of appeal’s orders prohibit the government from deporting Lambourne until a further hearing.

The appeals court of Kiribati ordered Lambourne be released pending a further hearing next week, but the judge was instead held in a motel in the capital, Tarawa, with a police officer stationed outside the entrance. His passport was also seized.

Speaking to the Guardian at the airport in Tarawa on Thursday as officers attempted to detain him, Lambourne called the actions “an unlawful order to remove me in defiance of the order of the court of appeal”.

“It is a very sad day for the constitution in Kiribati,” he said.

Lambourne told ABC TV on Friday he believed the attempt to deport him was politically motivated; Lambourne’s wife, Tessie, is the opposition leader.

The ongoing separation-of-powers saga, which in recent months has seen the government suspend both Lambourne and the chief justice, New Zealand judge William Hastings, exploded on Thursday morning when police attended Lambourne’s home with a deportation order.

An urgent hearing by the appeal court, consisting of three retired New Zealand judges, saw the Kiribati authorities ordered not to proceed with the deportation.

Immigration officials nonetheless attempted to forcibly place Lambourne on a Fiji Airways flight on Thursday afternoon. After a dramatic standoff – which saw the flight captain refuse to allow authorities to board Lambourne, following which the flight was denied permission to take off – the judge was detained and taken to nearby accommodation. The plane eventually departed.

The court reconvened on Friday morning to consider an urgent application for Lambourne’s release. The court ordered his release and barred the government from making further attempts to deport him, pending further litigation.

The court condemned efforts to deport Lambourne. “Their efforts were unsuccessful but appear to have been in clear breach of our order which we understand had been shown to them by a court officer,” the judgment said. “Such behaviour is unacceptable and risks putting… the persons directly concerned in contempt of court. It must cease.”

Dr Tess Newton Cain, senior research fellow and project lead for the Pacific Hub at Griffith University’s Asia Institute, expressed concern about the latest developments. “The fact that the government was prepared yesterday to deport David Lambourne in contravention of an order from the court of appeal is a huge red flag when it comes to the rule of law in Kiribati,” she said.

In a statement on his Facebook page, the office of the Kiribati president said: “The Government of Kiribati abides by the laws and the constitution of Kiribati and has a higher duty to protect the interest of the people of Kiribati. It is disheartening to see neocolonial forces weaponizing the laws that have been enacted to protect a Kiribati person to pursue their own interest and suppress the will of the people.”

With Lambourne and Hastings suspended, and the commission of two court of appeal judges shortly expiring, Kiribati is on the verge of having no functional judiciary.

A spokesperson for Australia’s Department of Foreign Affairs and Trade told the Guardian it was monitoring the situation and providing consular assistance to Lambourne.

Australia and New Zealand are Kiribati’s primary development partners, although Chinese influence in the country has been growing since Kiribati withdrew its diplomatic recognition of Taiwan in 2019. 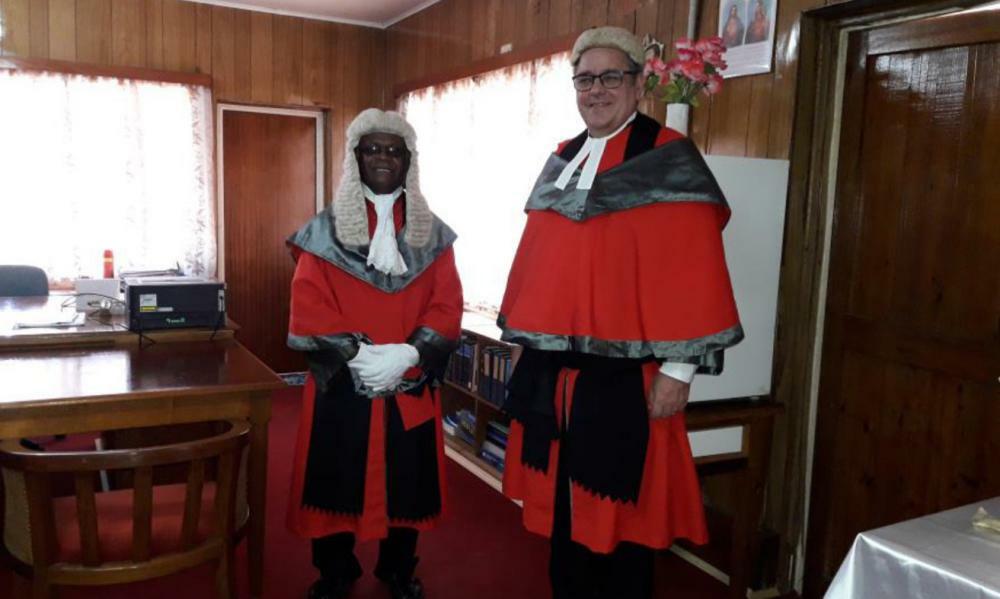 Kiribati constitutional crisis deepens as it detains Australian-born high court justice
Judge David Lambourne was detained after a failed bid to deport him, which he called a ‘devastating assault on the…

The Guardian - AU
From analysis to the latest developments in health, read the most diverse news in one place.
Kiribati court grants David Lambourne bail, slams attempts to deport High Court justice back to Australia

The Appeals Court orders the immediate release of Australian David Lambourne, who was placed in immigration detention following a failed…

David Lambourne, an Australian citizen, is in immigration dentation after a dramatic deportation attempt at Kiribati's international airport where Fiji…

The Independent UK
One place to find news on any topic, from hundreds of sites.
Fewer than 120,000 people inhabit Kiribati yet they apparently hold $682m in Australian banks

Fewer than 120,000 people inhabit Kiribati and the median household income is about $12,000. Yet data released by the Australian…