By US correspondent Greg Jennett and political reporter Jake Evans 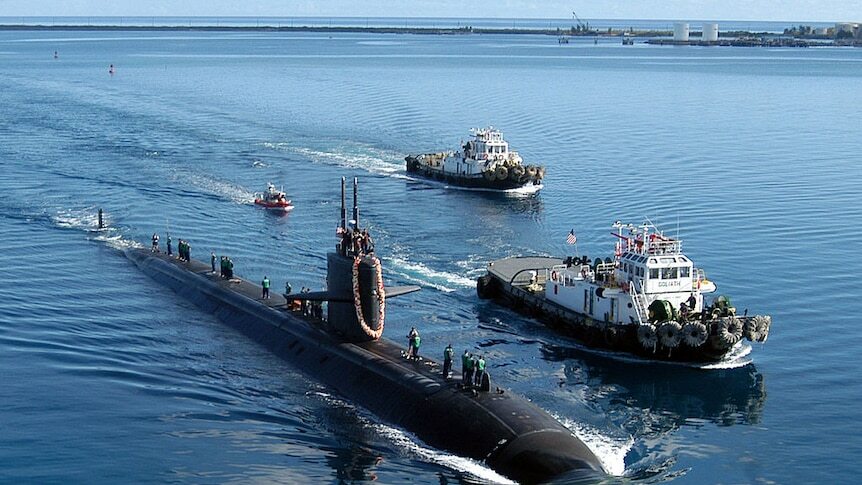 Australia is embarking on its most significant change of defence and strategic direction in decades, aiming to make the Navy's next submarine fleet nuclear-powered.

Prime Minister Scott Morrison said a new alliance had been formed with the UK and US that was the most significant security development for Australia since the ANZUS Treaty.

"The relatively benign environment we have enjoyed in many decades in our region is behind us," he said.

In the deal announced by US President Joe Biden, UK Prime Minister Boris Johnson and Prime Minister Scott Morrison, the US will share secret nuclear technology to help Australia in the switch to nuclear-powered boats.

The fleet will be the first initiative of a newly formed trilateral security partnership called AUKUS.

Mr Morrison said the "next generation" partnership would help ensure the region's safety.

"Our world is becoming more complex, especially here in our region, the Indo-Pacific," Mr Morrison said.

"This affects us all. The future of the Indo-Pacific will impact all our futures."

The deal does not extend to nuclear weapons, only the propulsion system, which has always been conventional diesel-electric in Australia's submarine classes.

"We will continue to meet all of our nuclear non-proliferation obligations."

"We're opening a new chapter in our friendship, and the first task of this partnership will be to help Australia acquire a fleet of nuclear-powered submarines, emphasising, of course, that the submarines in question will be powered by nuclear reactors — not armed with nuclear weapons," he said.

"Our work will be fully in line with our non-proliferation obligations."

In a joint statement, the three leaders said AUKUS would also leverage UK and US expertise to bring cyber, artificial intelligence and quantum computing capabilities to Australia.

Thanking "that fellow Down Under", US President Joe Biden said the new partnership would ensure the three countries had the most modern capabilities to defend against "rapid threats".

"We're taking another historic step to deepen and formalise cooperation among all three of our nations, because we all recognise the imperative of ensuring peace and stability in the Indo-Pacific over the long-term," Mr Biden said.

The leaders said they aimed to "bring an Australian [nuclear submarine] capability into service at the earliest achievable date".

Mr Morrison said the enhanced alliance was a response to rapidly developing circumstances in the region that were not envisaged even five years ago.

"This challenge will require more of us in Australia, and for all of us who share a common vision about peace and stability," Mr Morrison said.

China’s embassy in Washington said the US, UK and Australia needed to "shake off their Cold War mentality and ideological prejudice".

A spokesman said "[countries] should not build exclusionary blocs that harm the interests of third parties".

The new partnership also spells the end of the Australian government's $90 billion project for French-designed submarines to be built in Adelaide.

In a statement, France's Naval Group said it was disappointed the Australian government had scrapped the project:

"For five years, Naval Group teams, both in France and in Australia, as well as our partners, have given their best and Naval Group has delivered on all its commitments," it said.

Defence had been openly discussing abandoning the multi-billion dollar project since June, as the French deal faltered.

"The American choice which leads to the removal of an ally and a European partner such as France from a structuring partnership with Australia, at a time when we are facing unprecedented challenges in the Indo-Pacific region ... marks an absence of coherence that France can only observe and regret," he said in a statement.

About $2 billion had already been spent on the Attack-class submarines.

Mr Morrison said France remained an important partner in the Pacific, but he had to make decisions in the best interests of Australia's national security.

Speaking on radio station 6PR, he also said the contract with Naval Group was reaching a final opportunity to cancel the deal.

"You have gates in contracts for a reason and we were approaching a very important, effectively final, gate on that contract from which there was no point of return," he said.

"To have that opportunity to go down the nuclear submarine pathway was very important."

An 18-month taskforce led by Defence will investigate how Australia can become a "reliable steward" of nuclear submarines.

But he said it also marked a failure to deliver the $90 billion Attack-class submarines.

"After eight years, three prime ministers and billions of dollars of sunken costs ... this is the most expensive example of something that has characterised this government: its ability to promise but its inability to deliver," he said.

Mr Albanese also called for the opposition leader to be given a seat at the table when it came to decisions on the submarines, promising to keep the position if he was elected at the next poll.

Former submariner and senator Rex Patrick is calling for an urgent inquiry before the deal is finalised.

"If it's a US submarine, they have highly enriched uranium in their reactors and that creates a proliferation issue in terms of Australia standing up saying, ‘No-one should have these this sort of fuel available to them,'" he said.

"Yet, we might end up having to have that on our submarines."

Mr Albanese also called for a joint mechanism between senior members of government and the opposition to give bipartisan oversight of the partnership.

"We need to know the full cost of the abandonment of the existing program, but we also need to know what the cost of the proposed program would be ... given that the proposal is that the new submarines would not be in the water until 2040," Mr Albanese said.

Mr Morrison said Australia would need to spend more on Defence as a requirement of the new partnership.

"This is something that has been negotiated very quickly and has obviously been kept quiet in Canberra," he told ABC News.

"The irony is that when we chose the French-designed submarine a few years ago we actually took a nuclear-powered submarine and have been spending millions of dollars turning it into a diesel submarine."