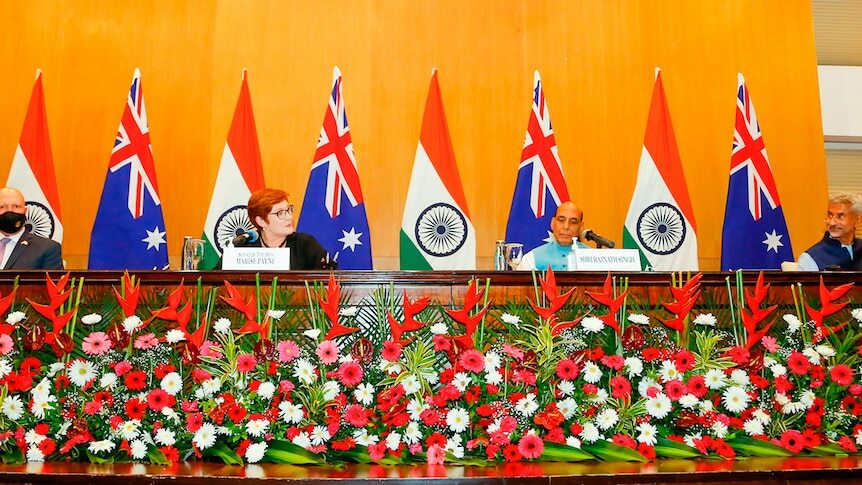 Australia and India are vowing to expand their military relationship after holding their inaugural meeting between defence and foreign ministers in New Delhi.

Defence Minister Peter Dutton said he had formally invited India to take part in the massive Talisman Sabre military exercises that the United States and Australia hold every two years.

Several other nations – including Japan, Canada and the United Kingdom – took part in the most recent Operation Talisman Sabre in northern Queensland, which involved around 17,000 military personnel.

India's Defence Minister Rajnath Singh did not say if India would accept the invitation to the next Talisman Sabre, which will not be held until 2023.

But drawing India into Talisman Sabre would broaden the coalition of participating nations and stir suspicion in China, which sent two spy ships to monitor the exercises earlier this year.

Mr Singh said there had been "remarkable progress" in the Australia-India relationship and both countries wanted to pursue "greater military engagements, better information sharing, and cooperation in emerging defence technology".

Australia's role in the Malabar naval exercises — with India, Japan and the United States – appears to have been cemented, with Mr Dutton saying Australia would "continue to participate" in Malabar in future years.

Australia and India have also agreed to intensify information sharing between their two navies, which have been participating in bilateral maritime exercises off the coast of the Northern Territory this week.

Both countries hailed the inaugural 2+2 meeting as a significant milestone in the relationship and analysts have said it is a sign that Australia and India's strategic interests are continuing to converge.

Beijing and New Delhi are still locked in a standoff in the wake of violent border clashes, while Mr Dutton intensified his criticism of China earlier this week, accusing it of engaging in "increasingly coercive" behaviour.

"We both depend on free and open access to sea lanes … and we share an unwavering commitment to upholding the rules based in international order," he said.

Senator Payne said both Australia and India wanted to see "a natural multipolarity" prevail in the region.

"Australia is confident about our role in such a region and it is obvious that India is a natural leader within the rules-based system," she said.

But he pressed Senator Payne over the fate of Indian students who have been unable to travel to Australia to commence their studies because of Australia's closed borders, saying their frustrations were "completely understandable".

Senator Payne said she understood India's concerns and stressed Australia would welcome international students back in as soon as its vaccination rollout permitted borders to reopen.

Ian Hall from the Griffith Asia Institute said the 2+2 meeting was an "important moment" that "showed how far we've come in this relationship in a relatively short period of time".

But he said the recent revival of long-stalled free trade negotiations between the two nations showed there was plenty of work still to be done to develop economic ties.

"While an 'early harvest' economic deal would be good, it is obvious that we're a long way from a full agreement," Dr Hall said.

"It is also clear that Australia is still doing a lot of the lifting, as it were, bringing new things like Talisman Sabre to the table."