After a 3-hour, 20-minute rain delay, Dillon – whose only hope to make the playoffs was to win the regular season finale – restarted in the lead on Lap 145 but quickly lost it to Cindric.

With three laps remaining, Dillon got into the back of Cindric entering Turn 1 and got him loose, which allowed Dillon to reclaim the lead and he held off his Richard Childress Racing teammate, Tyler Reddick, by 0.128 seconds to secure the win.

Dillon got into the position of the lead because of a massive wreck on Lap 138. Rain – which had already been threatening for several laps – finally began coming down hard as the field entered Turn 1.

Several cars immediately began spinning on the track. Dillon, who was running 16th entering Turn 1, was the first car to emerge from the carnage when the caution was displayed and scored the leader.

The win is the fourth of Dillon’s career and second at Daytona. He also won the 2018 Daytona 500.

“What a crazy race. I’ve got to thank my teammate Tyler Reddick, everybody that makes this thing happen,” Dillon said. “Man, we’re in the playoffs!

“There was a lot going on there (battling Cindric). I knew if it got to the white (flag) I was afraid if I waited too long I was afraid somebody would wreck behind us. So, I wanted to go ahead and get the lead.

“I had a big run to him and I knew I had a teammate back there and we were in pretty good shape. Gave (Cindric) a little too much push there, got him loose and we went going.”

Although he was encouraged by his grandfather and team owner Richard Childress to wait until the final lap to make a move, Dillon said the smaller field made his choose otherwise.

“I felt like I had good (Chevrolet) teammates behind me. If I could get the lead, (Cindric) would not be able to hold onto the draft,” he said. “We’ve done it in practice enough to know that you’ll lose the tail (end of the draft), and it’s hard to get back to it.”

Cindric rallied to finish third in the race, Landon Cassill was fourth and Noah Gragson ended up a career-best fifth.

During the break between Stages 2 and 3, all of the lead-lap cars pit with Michael McDowell first off pit road. Busch was penalized for speeding and had to restart from the rear of the field.

McDowell led on the restart on Lap 101 followed by Denny Hamlin and Joey Logano.

Shortly after the restart and Logano moved into the lead, the field turned on the backstretch and Tyler Reddick got into McDowell to trigger a multi-car accident that also collected Truex, Byron, Chastain, Chris Buescher and Corey LaJoie.

“I’m not really sure what happened. Obviously, we were all racing pretty hard there knowing that there’s weather coming and we’re past halfway,” McDowell said. “I just have to go back and look at it.

“I’m not sure if (Reddick) got me a little bit or if (Logano) just blocked a little bit too hard. It’s superspeedway racing trying to get ourselves locked into the playoffs. We were going for it.”

The race resumed on Lap 108 with Logano out front followed by Reddick, Bowman and Ricky Stenhouse Jr.

A push from Stenhouse put Reddick back into the lead on the restart but Logano got back around him on Lap 109. Reddick took the lead back on Lap 100 as the battle for the lead remained wild.

A shove from Stenhouse sent Bowman to the lead on Lap 115.

On Lap 125, Briscoe and Bowman made contact racing on outside lane which set off another multi-car accident that also collected Briscoe, Bubba Wallace, Harrison Burton, Stenhouse and Austin Dillon.

Several cars elected to pit under the caution but Justin Haley remained on the track and inherited the lead.

On the restart on Lap 131, Haley was followed by Erik Jones and Logano.

Logano got into the back of Jones coming off Turn 2 on the restart which sent both cars for a spin and brought out the sixth caution of the race.

The race resumed on Lap 135 with Haley out front followed by Aric Almirola and Suarez.

Buescher shoved Suarez to the lead on Lap 136 for the first time in the race.

As the field entered Turn 1 on Lap 138 rain began falling heavily and several cars began spinning and a massive wreck erupted, which collected many of the leaders.

Austin Dillon, who was running 16th, was the first car to escape the carnage and emerged as the leader as the race was first placed under caution and then red-flagged due to the rain.

Following a more than 3-hour delay, the race resumed on Lap 145 with Austin Dillon out front followed by Cindric, Ware, Truex and Cassill.

Truex shoved Cindric into the lead on the restart.

With 10 laps to go, Cindric held a small lead over Austin Dillon, followed by Cassill and Gragson.

With three laps remaining, Dillon returned to the lead after Cindric got loose.

Busch held off a late-charge by his teammate, Truex, to take the Stage 2 win.

Hamlin was third, Logano fourth and Wallace rounded out the top-five.

During the break between Stages 1 and 2, several car elected to pit. Busch was penalized for running over equipment on pit road and had to restart from the rear of the field.

On the restart on Lap 41, LaJoie – among those who stayed out – led the way followed by Wallace.

Wallace powered past LaJoie on the outside on the restart with a push from Jones to take the lead.

Jones moved to the top spot on Lap 43 only to see LaJoie reclaim the lead on Lap 44. Jones returned to the front on Lap 47.

Buescher edged ahead of Jones for the lead on Lap 51 only to see Jones lead at the line on Lap 52.

On Lap 59, Byron got a shove from Buescher into the lead. But Jones got back around him to lead Lap 60.

Hamlin moved into the lead on Lap 64 as Buescher made a huge save off Turn 4 but there was no caution.

With 20 laps remaining in the stage, Hamlin continued to lead the way while keeping Logano and Burton at bay.

Toyota teams kicked of a round of green-flag pit stops on Lap 78. Chevrolets and Fords were next on Lap 79.

Once the cycle of stops was completed, Elliott led the way on Lap 81.

Busch got around Reddick to return to the front on Lap 92.

Logano edged Elliott by 0.039 seconds in a one-lap dash to the finish to take the Stage 1 win.

Burton was third, Busch was fourth and Truex rounded out the top-five.

Larson started on the pole but Elliott got a great jump and moved into the lead on Lap 1.

With 25 laps remaining in the stage and rain around the area, Elliott maintained a small lead over Logano with Bell in third.

On Lap 16, Larson was forced to pit road with an engine issue and eventually had to take his No. 5 Chevrolet to the garage, which brought an early end to his day.

“If there’s one positive, I didn’t get caught up in a crash,” Larson said.

Jones rocketed past Elliott on the outside on Lap 22 to move into the lead for the first time. Elliott got back by him to reclaim the top spot on Lap 24.

Jones edged back out front on Lap 27 as Hamlin moved into second.

On Lap 32, Hamlin got loose at the front of the field which kicked of multi-car wreck that collected Bell, Reddick, Ryan Blaney, Harvick and Brad Keselowski.

The race resumed with one lap to go in the stage and Elliott in the lead. 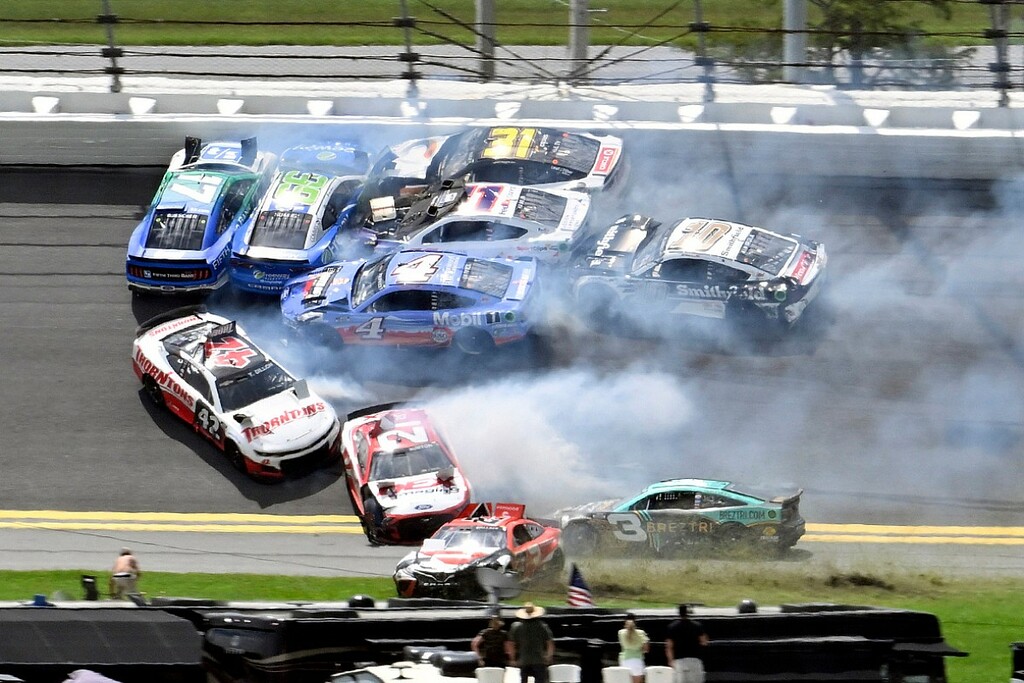 Autosport
From analysis to the latest developments in health, read the most diverse news in one place.
Steady hands, weather and luck: How Austin Dillon won the Cup Series race at Daytona
Austin Dillon stood underneath an umbrella three-plus hours before he’d actually claim the checkered flag on Sunday and shrugged his shoulders.

Tribune News Service
Austin Cindric: "I totally expected to get drove through"

Austin Cindric found himself in an excellent position late in Sunday’s rain-delated NASCAR Cup Series race at Daytona but it was also a lonely one.

The field is set for the 2022 NASCAR Cup Series championship playoffs.