Austin Adams Is Hitting Upon Some Weird, Distressing History 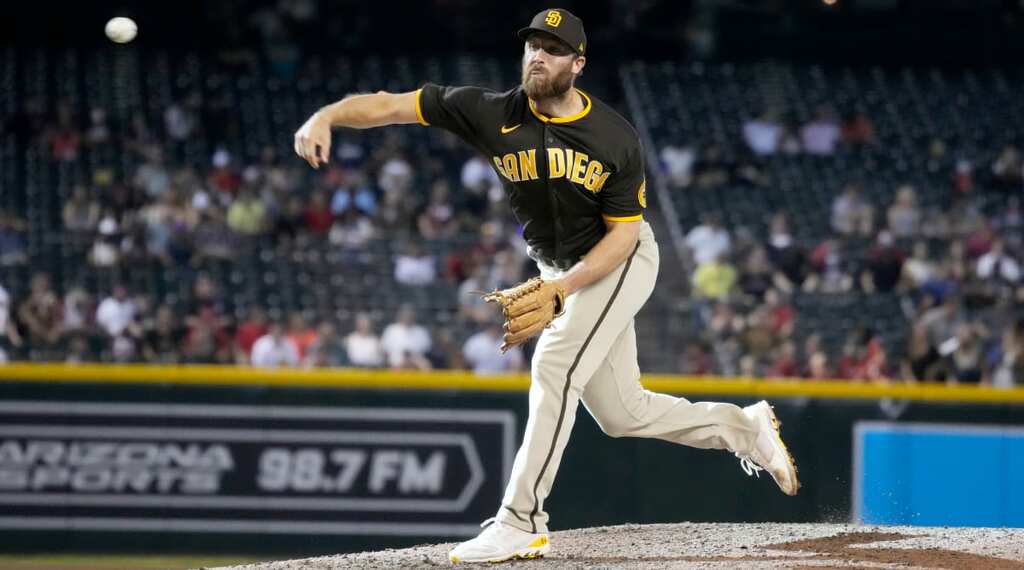 There are just eight pitchers in modern baseball who have hit more than 22 batters in a season. (One did it twice: a turn-of-the-century stalwart for the Philadelphia A’s named Eddie Plank.) And until this year, the group was easy to understand, woven together by a few obvious common threads.

All of these pitchers had finished their careers before the Great Depression. All were workhorse starters typical of their era: Each threw at least 200 innings with more than 25 starts in the season that he hit so many batters. There were fewer commonalities when it came to the finer points here—a few of the eight were otherwise great pitchers, including two who went on to become Hall of Famers, and a few were very much not—but there was at least a consensus on these basic facts. It wasn’t hard to sketch out a prototype of the type of guy who had exceeded 22 HBPs: Dead Ball–era pitcher, perhaps a generally loose cannon playing at a time when control was hardly at a premium, logging plenty of innings and ending up with plenty of hit batsmen as a result. All of these pitchers fit the type.

Until this year. Because this year, for the first time in nearly a century, a pitcher has exceeded 22 HBPs, and he fits exactly none of the aforementioned criteria.

What he's doing is not a product of his time. He is a reliever. He has pitched fewer than 50 innings with a few weeks of the season left to play. He is Austin Adams, and he is on the brink of a very weird, somewhat distressing sort of history.

After hitting three batters in one inning Sunday—his second multi-hit-by-pitch game of the month—Adams has 23 HBPs in 48 2/3 innings. It is hard to accurately describe how unbelievable that is. “No one has done this in a hundred years” might seem like it should be a good start. But that fails to convey what’s most bizarre here, which is not that it is happening for the first time in decades, but that it is happening from a reliever, from someone who has faced only a fraction of as many batters as the pitchers who did this a century ago. When considering just the raw counting stat, Adams sits near the top of the HBP leader board: Again, with 23, he is one of just eight pitchers ever to hit so many batters, and that’s with weeks still left in the season. He already owns the hit-by-pitch record for the Expansion era, since 1961, by a sizable margin. (It seems unlikely that he could reach the modern record of 32, set by Chick Fraser in 1901, but then again, given that he hit three in just one inning a few days ago, he might come closer than you think.) And when you look at this as a rate stat? Adams has been, quite literally, almost off the charts.

We’ll compare him only to his peers to make this easy. Here are the 200 pitcher seasons with the greatest ratios of HBP-to-IP (minimum of 20 innings) with the two figures plotted against each other. As you might imagine, all of the pitchers who have put up such a high ratio are either relievers or starters who had abbreviated seasons for one reason or another, with none of them registering more than 80 innings: These are the pitchers most like Adams. They represent the extreme here. They cluster in an obvious pattern. And Adams is still a clear, ridiculous outlier, with history’s greatest ratio of HBP-to-IP.

Adams is the one in red. But you knew that already.

(Curious about the other notable outlier? The point with 11 HBPs and 24 innings pitched is a 41-year-old Orel Hershiser in a shortened attempt at a final season.)

It is hard to find an answer on just what has gone wrong for Adams. The Padres reliever is 30 years old, in his fifth season in the major leagues, and he has never approached anything like this before. (His previous hit-by-pitch season record was … one. This is the first time he’s ever hit multiple batters in one year, and boy, has he ever.) If you ignore all the HBPs, he’s having a solid season, likely his best ever. This is the first time that he has gotten more than 40 innings of major league work, and he’s done it with a 3.51 ERA, a personal best. But, of course, you can’t ignore all the HBPs. All 23 of them have come on his slider, but that’s only because sliders make up a sizable majority of his pitches in the first place, 88%. There is no discernible pattern in when he is more likely to slip up and hit someone: Seven of the 23 HBPs have been first pitches, eight have been in two-strike counts, and the remaining eight have been somewhere in between. He has hit lefties and righties almost exactly equally:

It is not a record that anyone wants to chase. At best, it suggests mechanics failing, order breaking down, a game slipping away entirely. At worst, it suggests malice, something much darker. (“It’s a slider, it’s not meant to hit anybody,” his catcher, Austin Nola, told San Diego reporters after the rough outing Sunday. “It’s just one of those sliders that has so much spin on it that … sometimes it’s going to back up and hit guys.”) Adams surely would not like to be here. But he has hit upon history all the same.