Auckland mall attack: How St John staff responded without knowing it was terrorism 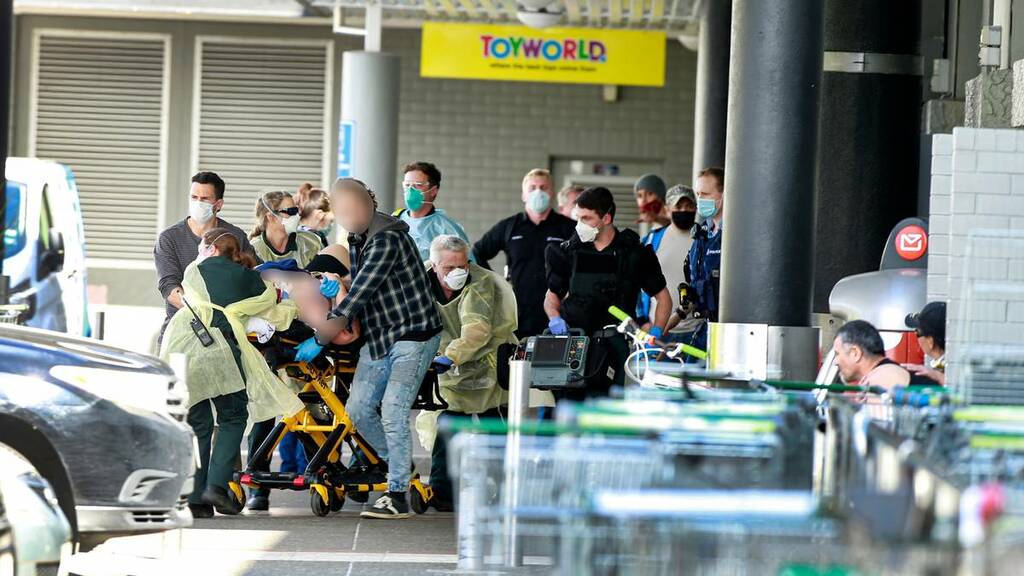 A St John worker who pronounced a man dead after he stabbed Auckland supermarket shoppers only discovered during a debrief hours later that it had been a terrorist attack.

Eighteen St John staff rushed to help to save the lives of shoppers who had been knifed by 32-year-old Ahamed Aathil Mohamed Samsudeen at Countdown in New Lynn on Friday September 3, before he was shot dead by police.

All eight victims have survived and three are in a stable condition at Auckland City Hospital. The rest are recovering at home. Many have shared their experiences and gratitude to first responders through statements issued by police.

It was only once St John crews debriefed in the carpark of Auckland City Hospital that the severity of the attack sunk in.

"I think everybody was more shocked afterwards and what they'd just been to," said operational manager at the scene Braden Stark.

"These guys they're resilient. We see lots of stuff, we see terrible things, but the actual shock that this was a terrorist attack, essentially in our backyard, was quite confronting.

"We knew there were multiple people that had injuries secondary to stabbing, that's really all we get.

"When people call ambulances in those situations they're often quite stressed as well, so trying to get accurate information can be difficult."

Stark had never responded to a terrorist attack before, and said the closest comparison would be responding to a major car accident.

A string of challenges were running through his mind at the LynnMall Countdown that day, including triaging, adhering to Covid-19 restrictions and the large amount of bystanders.

Three people were initially found to have life-threatening injuries and were treated first before being driven to hospital.

More ambulance crews started arriving - 11 resources were dispatched in total - and were delegated to other victims with less severe injuries.

"Whenever you arrive on scene where there's a large amount of patients, bystanders and police it can be slightly confronting, especially with the element of unknown of what's actually been going on," Stark said.

Bystanders helped staff to stop the bleeding from stab wounds, which Stark said can be the difference between life and death.

"The primary thing is when someone's got a significant bleed, is stopping that bleed ... so putting direct pressure, packing wounds, and then we can move on to giving IV medication," he said.

"That was the primary thing we were having to do, was to control the bleeding and give this medication if required to get them to hospital."

All crew had to wear full airborne PPE, including N95 masks and eye protection, and maintain social distancing where possible because Auckland remained under alert level 4 restrictions.

This added another challenge.

"[It's] obviously a bit restrictive, it's hot, there are full masks on," said Stark.

"When you approach a scene like that where there's a lot of people on scene it's high emotion, it's high stress.

"A lot of people just immediately see the green uniform and they try and get our attention. We have to remain task-focused to get around these people, to find the patients, especially when they're spread over a relatively large area of the supermarket."

The terrorist had to be pronounced dead, something that Stark said is "part of the job".

"Everybody on scene is treated like a patient, no matter what has happened. That patient was assessed and essentially was found to be deceased.

"At that time when we were doing that, we still hadn't had the full background story of what had actually gone on."

Six victims were taken to hospital that day. Despite the chaos Stark said he did not panic, but said it was "definitely not a normal day".

He said knowing all victims have survived is the reward for the hard work of staff.

"The crews did a fantastic job of recognising severity and quickly getting those people to hospital.

"It's definitely one of the rewards the staff can certainly take credit for, that their quick action, their quick decisions, the correct treatment and getting those patients to hospital as fast as possible."

But he said staff treated the incident like "any other mass casualty" and it wasn't until they could reflect afterwards that they were told the full details.

"We had completed our job at the scene and all the patients were at hospital and we were standing around reflecting on the incident, and that's when it really sunk in what this was."