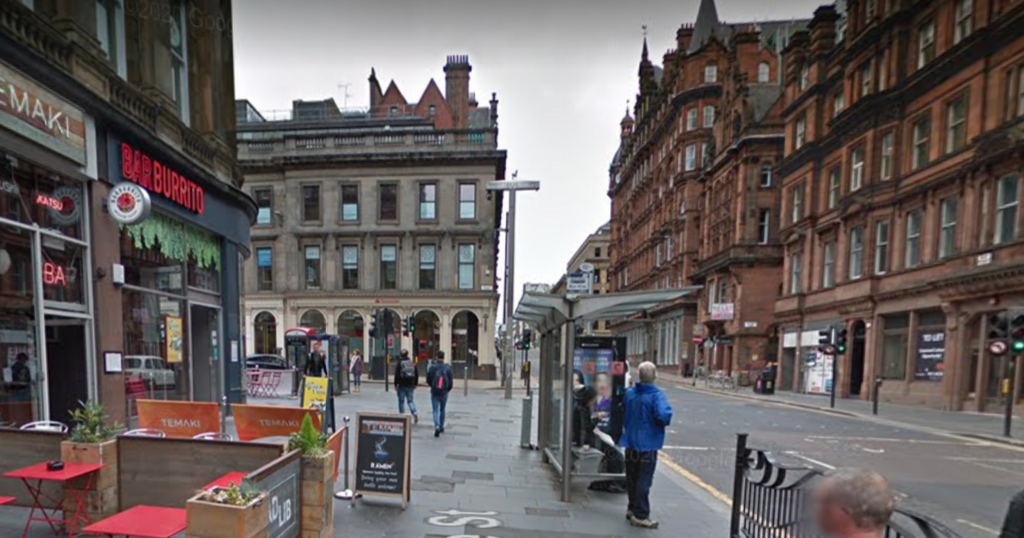 A man has been rushed to hospital after an attempted murder bid on a busy Glasgow street.

Officers have launched a probe after the 60-year-old man sustained serious injuries in a “despicable” attack by another male.

The incident occurred yesterday night, october 8, around 11.45pm at a bus shelter just outside of Bar Burrito on Hope Street.

The victim was rushed to Queen Elizabeth University Hospital where he remains in a critical condition.

Police say they are treating the incident as attempted murder and urge anyone with information to come forward.

A description of the suspect has been issued to the public.

He is described as being a white man in his forties, around 5ft 6ins tall, of a medium build with short dark hair.

He is known to have spoken to witnesses nearby following the incident before walking away towards Gordon Street.

At the time he was wearing a dark three quarter length jacket, light coloured blue jeans and a grey hat. He was holding a dark holdall, a white polythene bag and a brown satchel.

Detective Sergeant Gordon Walker of Stewart Street CID said: “This was despicable behaviour which has resulted in the serious injury of a man. Enquiries remain ongoing but we are treating this as an attempted murder and we are working to establish the circumstances leading up to this incident, and to identify the man responsible.

“There would have been a number of people in the area around the time of the incident both on the street and in vehicles and taxis. I am appealing to anyone who saw what happened to contact police as soon as possible.

“I would also encourage anyone who was driving in the area to please check any dashcam footage for anything which might be useful to our investigation.

“Anyone with information should contact police on 101 quoting incident number 4236 of 8 October, or alternatively contact Crimestoppers anonymously on 0800 555 111.”