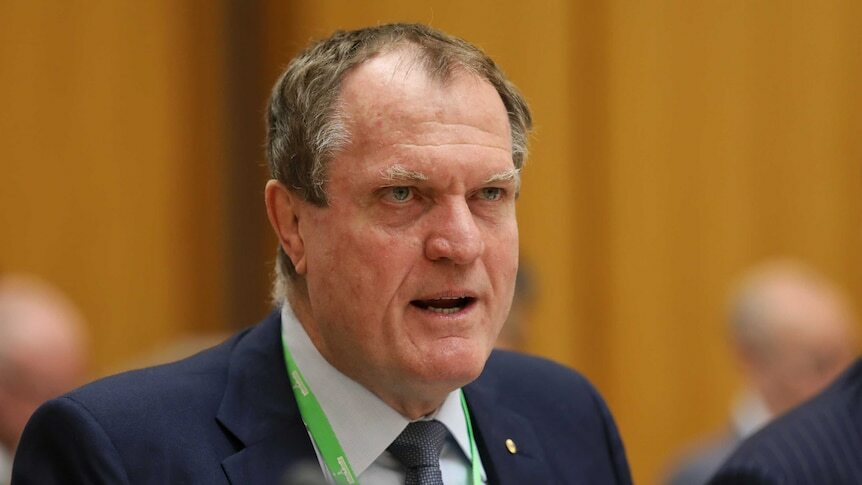 The Australian Tax Office (ATO) is not pursuing $180 million in JobKeeper payments made to ineligible businesses because it says they made "honest mistakes" when applying for the money.

But it has recovered $194 million in "overpayments" from other entities as pressure grows on the agency to publicly name the companies that received the wage subsidy despite increasing turnover.

On Friday, tax commissioner Chris Jordan and second commissioner Jeremy Hirschhorn appeared before the Senate Economics Committee to answer questions about the ATO's administration of the JobKeeper scheme.

Mr Jordan gave the committee data showing the vast bulk of JobKeeper payments, worth about $70 billion, was paid in the first six months.

He said the ATO had reviewed roughly $12.5 billion of the program, and it had identified $470 million in overpayments.

Of that $470 million, the ATO had recovered $194 million so far, and it was pursuing a further $89 million, while $6 million was in dispute.

But the ATO has determined it will not pursue the remaining $180 million (of the $470 million), mostly from small businesses, because employers had made "honest mistakes" — they had claimed the JobKeeper wage subsidy "in good faith" and had already passed it on to their employees.

"From our review of more than 1,600 entities across all markets, including 480 large businesses, we found more than 95 per cent were eligible," Mr Jordan said in a statement provided to the committee.

He noted: "Some entities made reasonable forecasts for the eligibility month but ultimately did not experience the projected decline in turnover for the full three or six months."

"To date, 75 businesses have approached us to voluntarily repay JobKeeper amounts, and of those, 62 have already repaid $203 million," he said.

"Of these, about 3,400 entities across 2,000 economic groups directly claimed for and received JobKeeper net payments in the 2019-20 financial year, totalling around $5 billion," Mr Jordan said.

The ATO had not determined how many companies had received JobKeeper and had since returned a profit, noting "the level of profitability was not an eligibility criterion" for getting the payment.

It depends how you define 'small business'

The ATO was also asked to provide the committee with a breakdown of the size of entities that received the JobKeeper wage subsidy.

He said more than 97 per cent of entities that received JobKeeper payments "were small to medium businesses with a turnover of less than $250 million".

On Friday morning, Treasurer Josh Frydenberg, in an article published in The Australian, wrote that JobKeeper "overwhelmingly supported small businesses, which were 97 per cent of the recipients."

The ABC asked the ATO to clarify why Mr Jordan used an unorthodox definition for "small and medium businesses" in the hearing.

The ATO did not respond with a formal answer.

There is no single definition of small business in the legislation.

Mr Jordan told the committee that businesses with a turnover of less than $250 million got about $70 billion (78 per cent) of all JobKeeper payments.

Ms Wilkinson said during the first six months of the scheme, about 97 per cent of businesses that received JobKeeper had turnover of less than $50 million, and accounted for more than 70 per cent of the payments received.

But she told the hearing the "program was carefully designed in the circumstances that we found ourselves in, which were extraordinary circumstances".

The comments came after Treasurer Frydenberg on Friday morning launched a staunch defence of the design of the scheme and the number of jobs saved.

Mr Frydenberg said the scheme had been designed to get payments out the door as quickly as possible and to save jobs.

If payments had been based purely on a business's actual decline in turnover, rather than a projected decline, he said "it would have taken months to deliver the support" and fewer jobs would have been saved.

ATO boss told: 'you're in breach of a lawful order'

Labor, the Greens and Independent senator Rex Patrick have all been calling on the federal government to publicly out the companies that refuse to pay back the wage subsidy despite increasing revenue and/or profits during the pandemic.

Independent Senator Patrick last month moved a Senate motion for the ATO to publish the names of all businesses with a turnover of more than $10 million that received JobKeeper.

Mr Frydenberg had also subsequently lodged the government's own claim for public interest immunity, saying that publishing the details of private firms "would undermine public confidence" in tax law and administration.

The Treasurer has not forced companies that complied with the scheme and made big profits to repay the money.

But Labor MP Andrew Leigh and other politicians have been criticising the government for allowing taxpayer subsidies to go to companies that made big profits, including foreign-owned companies.

Senator Patrick has previously warned the ATO boss that by defying a Senate order he leaves himself open to the treat of fines and or jail.

At Friday afternoon's Senate Economics Committee hearing, Senator Patrick questioned Mr Jordan about his refusal to hand over the information, telling Mr Jordan: "Obviously, you're in breach of a lawful order".

"I'm really confused how that fits into the word[s] 'protected information' in the context of the Act," Senator Patrick said.

Mr Jordan said he would.

"I have gotten legal advice — I have been advised that it … will be subject to legal privilege," Mr Jordan said.