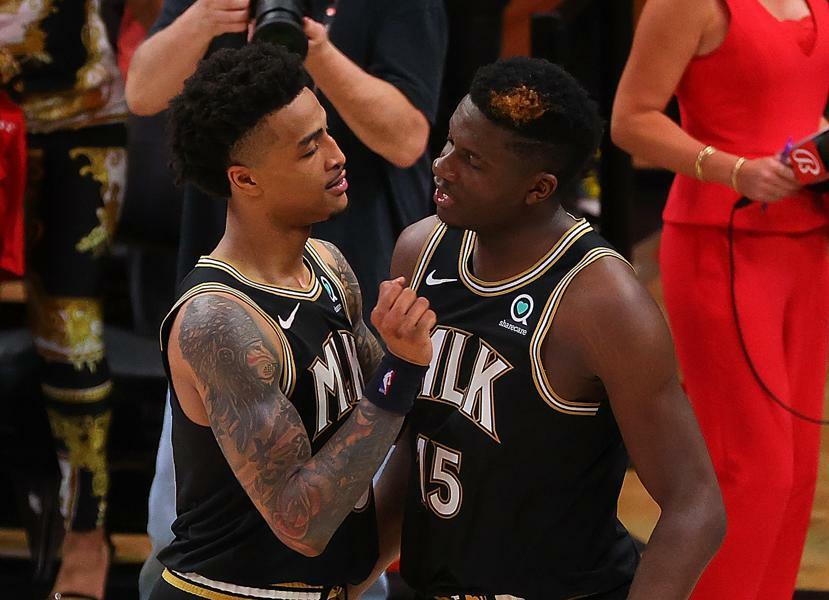 Fresh off a surprise run to the Eastern Conference Finals, the Atlanta Hawks are now aiming to build a sustainable contender.

After agreeing to a five-year, $125 million extension with restricted free agent John Collins in early August, the Hawks signed center Clint Capela to a two-year, $46 million extension last Wednesday, per ESPN's Adrian Wojnarowski. Collins, Capela and star guard Trae Young, who signed a five-year max extension worth up to $207 million last month, are now all under contract through at least the 2024-25 season.

With Kevin Huerter also eligible for an extension this offseason and De'Andre Hunter and Cam Reddish becoming extension-eligible next summer, the Hawks will soon have more difficult financial decisions to make. However, their team-building strategy might be light-years ahead if they're factoring in the likelihood of a new collective bargaining agreement and new national television contracts in upcoming years.

In March, CNBC's Jabari Young reported the NBA might seek a "$75 billion rights package, up from its current $24 billion deal" when its contracts with Disney and WarnerMedia expires after the 2024-25 season. "One person familiar with sports media deals" told Young that the NBA "could get $70.2 billion over nine years, using metrics including total viewer hours, which helps networks determine the value of sports league rights."

If the NBA does succeed in tripling its national TV contract, players and teams will benefit from that windfall, too. Those revenues get factored into the league's basketball-related income, of which players are guaranteed between 49 and 51 percent each season in the current CBA.

That could have major team-building ramifications moving forward. New national TV contracts set the stage for one of the biggest free-agent coups in NBA history back in 2016, as Hawks general manager Travis Schlenk experienced firsthand.

The league's current nine-year, $24 billion agreement with Disney and WarnerMedia was nearly triple what it received from its previous deal. When the National Basketball Players Association rejected the NBA's cap-smoothing proposal in the wake of that deal, the salary cap jumped an unprecedented $24 million between the 2015-16 and 2016-17 seasons. That gave the Golden State Warriors enough cap space to sign Kevin Durant away from the Oklahoma City Thunder, and they promptly went on back-to-back championship runs.

Before the Hawks hired him in May 2017, Schlenk was the assistant general manager of the Warriors, so he's well aware of how a massive cap spike can impact a team's free-agent fortunes. If the players union again rejects any cap-smoothing proposals from the NBA, a similar cap spike might occur following the 2024-25 season. Depending on how much the league receives from its new TV deals, it might even be more drastic than the 2016-17 version.

The NBA went from receiving slightly more than $900 million annually from Disney and WarnerMedia under its previous contract to roughly $2.66 billion per year. If the league again triples its annual take-home rate, it would be adding around $5 billion to the BRI pot every season. The cap rose $24 million in 2016-17 with less than a $2 billion annual increase in national TV revenue, so one can only imagine the effect that a $5 billion jump would have.

There's no guarantee that the NBA will successfully land its desired $75 billion deal, especially with ratings stagnating in recent years. Upcoming CBA negotiations could also throw a wrench into a one-year cap explosion, too.

The CBA is currently set to expire following the 2023-24 season, but both the league and players union can opt out of it one year prior. Team owners could make cap-smoothing an integral part of the next CBA negotiations, knowing that its national TV contracts will soon be up for renewal. They also might seek to take back a bigger share of BRI from players, which would limit how much the cap rises each year.

As the NBA digs its way out of financial losses stemming from the COVID-19 pandemic, the upcoming CBA discussions and new national TV deals will loom large over long-term team-building strategies. No one can say for certain what the league's landscape will look like in a few years' time, but the salary cap will likely be far higher than it is now.

The Hawks may be uniquely poised to benefit from that.

Capela's new extension ends after the 2024-25 season, and Collins has a $26.6 million player option in 2025-26 that he figures to decline if the cap does soar because of the new TV deals. However, Young's extension runs through at least the 2025-26 season—he has a $39.3 million player option in 2026-27—and new deals for Huerter, Reddish, Hunter and Onyeka Okongwu could run beyond the 2024-25 season as well.

The Hawks might have to eat huge luxury-tax bills for a few years until then, although letting Danilo Gallinari and Bogdan Bogdanovic walk once their respective contracts expire would help decrease the financial blow. Hemorrhaging money might be more palatable if the Hawks can get their young players under new long-term contracts before the salary cap explodes because of the new CBA and/or new national TV deals.

"What we are trying to achieve is literally keeping our best players, as you could imagine, trying to make clear that we’re going to have to spend a lot more than we have this season," Ressler said. "We fully expect that. I’m not sure we’re going to be able to keep every single player that we want to keep. Pretty good bet, pretty good assumption we will not."

The Hawks might not be able to keep their entire core together long term, but it would behoove them to extend as many of their young players as possible. What might look like overpays now could turn into massive bargains if the salary cap jumps by tens of millions of dollars in the coming years.

The Hawks enter the 2021-22 season with the fifth-best odds of any Eastern Conference team to make it to the 2022 NBA Finals, per FanDuel Sportsbook. They're built to win now.

If they sign Huerter, Reddish, Hunter and/or Okongwu to extensions over the next year or two and lock in potential long-term bargains, their unexpected success from this past season may prove to be sustainable, too.