Australian shares closed higher on Wednesday after a mixed session on Wall Street that saw falling tech stocks and fears of a US recession.

The Australian dollar was flat at 71.01 US cents.

Consumer staples was the strongest sector on the ASX 200, up 1.6 per cent. The biggest drag on the index was tech, down 2.9 per cent.

The best-performing stocks were fruit and vegetable supplier Costa, up 9.1 per cent. Chemicals company Nufarm gained 5.4 per cent, followed by gold miners Pereus (+4.6 per cent), Evolution Mining (+4 per cent) and Orica (+3.4 per cent).

HESTA to vote against AGL split

Superannuation giant HESTA, has announced it will vote against AGL's proposal to spin-off its coal-fired power interests into a new company Accel.

HESTA said the demerger will not "adequately support economy-wide decarbonisation, with a proactive and orderly transition to net zero emissions in the best financial interests of our members."

Energy company AGL is facing a coup from Atlassian founder Mike Cannon-Brookes who wants to stop the demerger. Mr Cannon-Brookes recently acquired an 11.28 per cent stake in AGL.

For AGL's demerger plans to go ahead 75 per cent of shareholders need to back it.

HESTA owns 0.36 per cent of AGL. Shareholders will vote on the demerger proposal on June 15.

"After reviewing the plan, we remain unconvinced that the overall demerger plan would sufficiently accelerate decarbonisation to meet Paris-aligned targets, nor manage the risk of stranded assets," HESTA CEO Debby Blakey said.

"We believe this company would struggle to make the transition out of coal successfully were power prices to fall or the transition further accelerated to limit the worst impacts of climate change," she said.

AGL has argued the demerger is in the best interests of shareholders.

The S&P 500 and the Nasdaq finished in the red on Tuesday as worries that aggressive moves to curb decades-high inflation might tip the US economy into recession dampened investors' appetite for risk.

"As we step back and acknowledge the primary market catalysts, it’s really been about the Fed pivot and the change in interest rates, which have influenced prices across the capital markets," said Bill Northey, senior investment director at US Bank Wealth Management.

Much of the sell-off was driven by a profit warning from social media company Snap, which sent the company's shares plummeting by 40 per cent and sparking contagion throughout the social media segment.

The company was on track to lose $US15 billion in market capitalisation, while shares of major online advertisers and social-media firms were set to lose a combine $US200 billion in value from the rout.

Snap said on Monday it was expecting to miss quarterly revenue and profit targets set just a month earlier and would have to slow hiring and lower spending.

Global supply chain disruptions have been exacerbated by Russia's war with Ukraine and restrictive measures in China to control its latest COVID-19 outbreak, sending inflation to multi-decade highs.

The US Federal Reserve has vowed to aggressively tackle persistent price growth by hiking the cost of borrowing, and minutes from its most recent monetary policy meeting, expected on Wednesday, will be parsed by market participants for clues regarding the speed and extent of those actions.

Investors currently expect a series of 50-basis-point rate hikes over the next several months, fuelling fears that the central bank could push the economy into recession, a scenario that is increasingly being baked into analyst projections.

"Tomorrow we look to the FOMC minutes for any signs that the approach to monetary policy may lean further hawkish or dovish than was laid out at the last meeting," US Bank Wealth Management's Northey said. 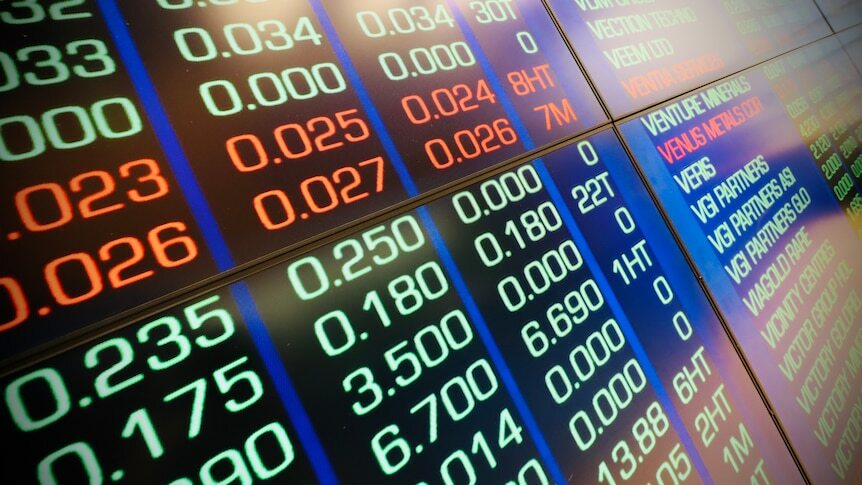 ASX slips after rising on tech, US stocks rally on rate rise outlook
Australian shares have fallen after a positive start on Thursday. It followed a strong session on Wall Street that saw…

ABC News
One subscription that gives you access to news from hundreds of sites
ASX down as tech stocks fall, US stocks close higher before Snap tanks

The ASX 200 dropped on Tuesday, while Tabcorp plummets. In the US, stocks closed higher before Snap tanked in after-hours…