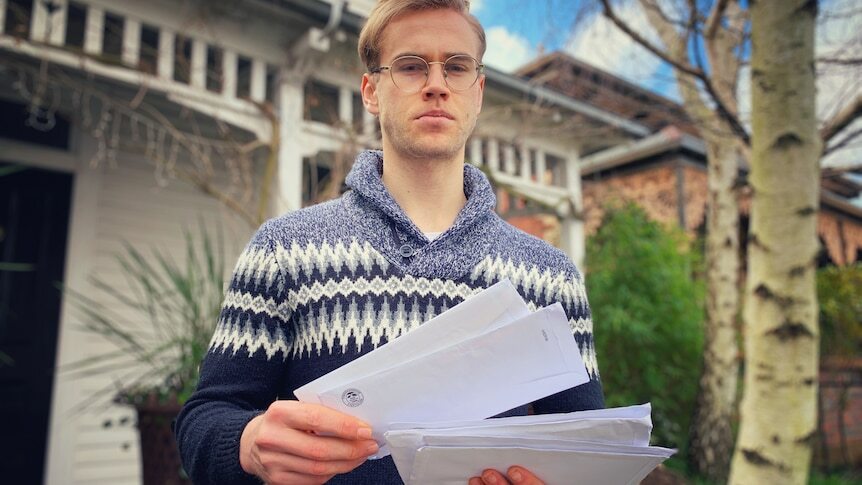 For new day trader Will Bennett, the flood started slowly.

Five years, ago he bought shares in a company online, as an investment.

But when he ramped up his trading during the pandemic, managing his portfolio electronically, he was soon receiving a daily visit from the postie.

"Each trade has a letter with it. And then, when you sell the stock, you get another letter for the same stock," he says.

If it happens, a new system should see the market's communication able to be done digitally by the end of the year.

For customers of most large online brokers, the letters could stop by the middle of 2022.

It's taken decades of complaints, the wrangling of disparate groups and, perhaps the biggest obstacle, saying goodbye to $24 million in annual revenue the ASX makes by charging companies for sending out letters that largely go in the bin.

How it (doesn't) work

Sean Foley is throwing money on the ground.

An associate professor in applied finance at Macquarie University – "looking at the plumbing, if you like, of the financial markets" – he's also a share trader.

The envelopes he's throwing are cheques worth less than a dollar, they would cost more to process than they're worth.

"There is absolutely no way," to avoid receiving paper communications he explains.

Here's how it works. If you buy shares in three different companies – like BHP, CSL and NAB – and a record is placed in the ASX's Clearing House Electronic Subregister System (CHESS), you'll receive three separate pieces of paper from the ASX confirming those trades.

Even though most people trade online or through brokers who submit the trades on their behalf, it's almost impossible to opt out of receiving reams of paper communications.

In addition, BHP, CSL and NAB need to know who owns their shares so you can receive dividends and vote at the annual general meeting.

They use companies like Computershare and Link Market Services to manage the share registry, meaning any trade will trigger a letter from them too.

Sell your shares and the CHESS system sends a letter confirming the trade. The registry companies will often do so too.

Will Bennett regularly receives mail confirming his purchase of a particular stock long after he's sold it.

"I don't understand why in this day and age it can't be done online," he says.

"I don't see any reason it wouldn't just be used through your email.

After a pandemic-inspired boom in trading, the number of paper notifications the ASX sent out soared 34 per cent last year.

It's now mailing more than 100 tonnes of paper statements annually.

Registry company Link Market Services used a total of 742 tonnes of paper "consumed externally on behalf of our clients" according to its most recent annual report. But there is no breakdown of how much was used for its share registry work and how much for other areas of the business.

Computershare does not have figures for its paper usage in its most recent annual report but notes in its corporate plan it's committed to "introducing paperless e solutions" across its business.

Dr Foley believes the exchange and registries have been slow to embrace electronic communication because they "clip the ticket", profiting with every interaction.

"One of the things that I've been able to ascertain in my discussions with various registries is that they charge the listed entities [companies like BHP] each time they need to perform an action," he explains.

"So you're asking them to do a job on your behalf. And anytime they do one of them or perform one of those functions, they get to charge the underlying entity."

Those actions can be anything from issuing a cheque to taking a call from a customer asking where a cheque is.

"Each of those actions incur a cost for the listed entity," he adds.

The CHESS system was introduced in 1994. Even though the 'E' stands for electronic, changing to allow for electronic communication has taken decades.

"My grandpa used to trade through a broker and I think that those statements may have been quite useful to him 45 or 50 years ago," Mr Foley says.

"But these days, everyone's trading with an electronic broker.

It hasn't been easy to change things on the market.

The ASX's blockchain-based replacement for CHESS was meant to be ready by April, but it's been pushed back two years.

A roster of senior executives have left the organisation and a software update last year closed the market for a day, triggering inquiries by the government and regulators.

Paper statements will be 'history'

One of the biggest issues for the ASX is its role: it is merely an exchange and record keeper, not the actual buyer and seller.

"What we're providing is actually evidence that when you're registered in the ASX and you own those shares — that's the service," says Andrew Jones, general manager for issuer services at the ASX.

"Now, the fact that it's communicated by paper is really an artefact of history and something we want to move beyond.

That's taken time. While some of the "smaller, more agile brokers" could be paperless by the end of the year, the larger online brokers will probably get there by the middle or end of 2022.

"They've got to get sign-off from the legal teams and work through their own internal processes," Mr Jones says.

Mr Jones said that some investors will prefer to receive paper statements.

Large utilities that have attempted to move from paper statements to digital have found around 30 per cent of customers want to keep getting paper statements, or don't engage with attempts to switch them to emails.

A spokesperson for Link Group says the registry has an "extensive range of digital tools" for communicating with investors.

"These can then be efficiently turned into a vehicle for future electronic engagement and have significantly supported moves towards eliminating paper."

“Computershare began issuing electronic holding statements for investors more than a decade ago in 2009," a spokesperson says.

"Today we issue most of our communications electronically, which means millions fewer paper mailings annually.

"This has improved the experience of shareholders, created new product and service opportunities, helped reduce costs and, importantly, forms part of our overall focus on sustainability."

The good news is that change could happen quickly. About 15 years ago, the requirement to post a copy of a company's annual report to each shareholder – often a weighty bound document running to several hundred pages – was changed to an 'opt in' system.

Customers had to request to receive a paper copy, and now less than 1 per cent do, says Ian Matheson, chief executive of the Australasian Investor Relations Association, which represents listed companies.

"Electronic statements will: a) reduce the amount of paper in the system; they will, b) reduce the cost for listed companies and therefore, their shareholders," he says.

"There's a huge opportunity here to reduce the amount of paper in the whole share ownership chain, not just CHESS statements, but all of these bits of paper that appear through the year will start to drop away."

Mr Matheson encourages people to contact their broker to make sure they are passing their email address through to the stock exchange and the listed companies.

"This paper wastage is phenomenal, and it can't come to an end soon enough," she says.

Although much of the paper is noted in annual reports as 'carbon neutral', it's difficult to know how individual companies source the material.

For day trader Will Bennett, he'll be able to change his behaviour – emptying the letterbox every day and throwing envelopes straight in the bin – and that of his over-worked postman.

"I think he's getting a bit sick of it because it's literally three letters or four letters a day," he says.

"He kind of rolls his eyes when he sees me."