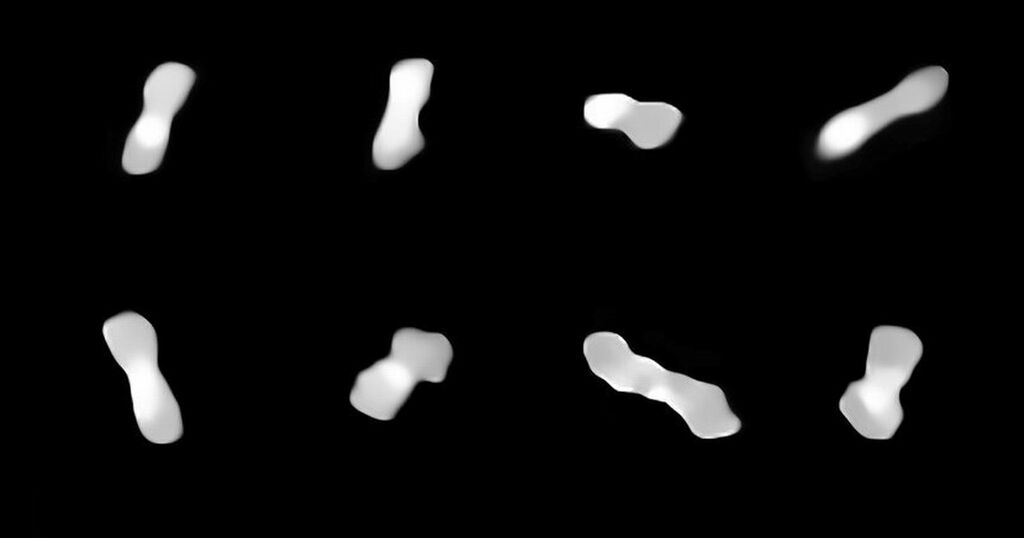 Images of an asteroid that looks like a giant dog bone have been captured by scientists in unprecedented detail.

Orbiting the Sun between Mars and Jupiter, 216 Kleopatra has fascinated stargazers since it was first spotted in 1880.

The new observations identify the asteroid's dimensions and mass more accurately than ever before, shedding light on how its two moons formed.

Kleopatra is now understood to be mainly metal, possibly a nickel-iron alloy, and measure 168 miles long by 58 miles wide – much bigger than previously thought.

Its high spinning speed has led astronomers to suggest that the asteroid may have birthed its own moons as small impacts lifted pebbles off its surface.

The images were taken at different times between 2017 and 2019 by the Very Large Telescope (VLT) in Chile's Atacama Desert.

They show Kleopatra at different angles as it travels through the main asteroid belt.

"Science makes a lot of progress thanks to the study of weird outliers.

"I think Kleopatra is one of those and understanding this complex, multiple asteroid system can help us learn more about our Solar System."

Kleopatra is 125 million miles from Earth at its closest. Its apparent size in the sky is equivalent to a golf ball about 25 miles away.

Two lobes, one larger than the other, connected by a thick neck led it to be dubbed the "dog-bone asteroid".

Its moons were discovered in 2008 and named AlexHelios and CleoSelene after the Egyptian queen's children.

Kleopatra is believed to be the remnant of a violent collision between two asteroids that did not completely shatter and disperse.

The international team created 3D models based on the various images.

A second study showed Kleopatra's density is only 3.4 grams per cubic centimetre, rather than an earlier estimation of 4.5 grams.

It is half that of iron, meaning its mass is 35% less than thought. Its moons are also in different locations to those predicted.

Lead author Professor Miroslav Broz, of Charles University in Prague, said: "This had to be resolved.

"Because if the moons' orbits were wrong, everything was wrong, including the mass of Kleopatra."

The new data and sophisticated modelling enabled the international team to describe precisely how Kleopatra's gravity influences the complex movements of AlexHelios and CleoSelene.

The low density suggests Kleopatra has a porous structure and could be little more than a "pile of rubble".

It adds to evidence it was likely formed when material reaccumulated following a giant impact.

The asteroid rotates at such speed that any faster it would start to fall apart. Even small impacts may lift pebbles off its surface.

Dr Marchis and colleagues say those could subsequently have created AlexHelios and CleoSelene, meaning Kleopatra may have birthed its own moons.

The images and insights were possible thanks to one of the most advanced adaptive optics systems on the European Space Observatory's (ESO) VLT.

It helps correct for distortions caused by the Earth’s atmosphere that make objects appear blurred – a phenomenon behind 'twinkling' stars.

It enabled the SPHERE (Spectro-Polarimetric High-contrast Exoplanet REsearch) instrument to collect the sharpest pictures to date.

ESO's upcoming ELT (Extremely Large Telescope) will be even better for imaging distant asteroids such as Kleopatra.

Dr Marchis added: "I can’t wait to point the ELT at Kleopatra, to see if there are more moons and refine their orbits to detect small changes."

Kleopatra is one of several dozen asteroids whose colouring suggests they contain metal.

Its strong reflection of radar signals indicates it is mainly metal, possibly a nickel-iron alloy.

These objects were once heated, melted and differentiated into structures containing a core, mantle and crust, much as the Earth was formed.

Unlike our planet, however, the asteroids cooled and solidified throughout, and many underwent massive collisions that exposed their metallic cores.

In some cases, those collisions launched fragments that eventually collided with Earth, becoming iron meteorites such as the one that created Meteor Crater in Arizona.

The findings appear in two papers in the journal Astronomy & Astrophysics.