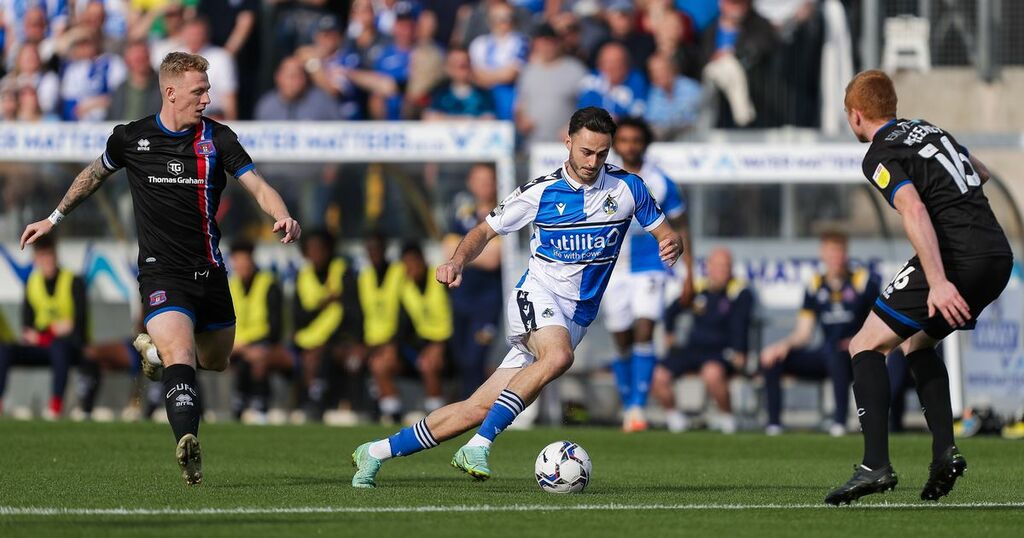 After replicating the dismal weather of that weekend with their performance against Swindon Town, Bristol Rovers were once again able to match the conditions, but this time in far more positive light as they swept aside Carlisle United at a sun-kissed Memorial Stadium.

A fierce 34th minute left-footed strike from Antony Evans coupled with goals from Sam Nicholson and Harvey Saunders late in the second half handed the Gas a needed three points that lifted them 16th in Sky Bet League Two.

The atmosphere at the Mem ahead of the game was tense to say the least and the Gas did little to help that feeling of angst following an uninspiring opening 30 minutes.

However, once Evans dispatched superbly 10 minutes before half-time, Joey Barton’s side delivered a composed 90-minute performance which saw them ride out comfortable winners. Here’s a few moments that you may have missed from Saturday’s game ...

With the International break bringing the majority of football upwards of League Two to a grinding halt, plenty of recognisable faces in the footballing world visited the Mem on Saturday.

Starting with perhaps the most notable of names, sat just to the right of the press box was former Aston Villa and Crystal Palace midfielder Mile Jedinak.

Jedinak, who was capped 78 times by Australia, is currently part of the coaching setup in the Aston Villa Academy, specialising as a loan development coach.

While Rovers have a few players on hire from clubs higher up the pyramid, Jedinak was actually in attendance to watch Carlisle striker Brad Young who is on loan from Villa.

With simply just a pad and pen in his hands, the 38-year-old critically watched every run, pass and shot Young made during his 60 minutes on the pitch. And before the forward had even taken his seat on the bench after being subbed off, Jedinak was already heading for the exit.

While Jedinak is undoubtedly a big name there was another individual sat just above him who would likely get a bit more recognition in north Bristol.

Accompanied by his family, former Rovers midfielder Liam Sercombe made his way up to the complimentary seating but not without stopping to have a conversation with another recognisable individual who’s now his boss, Cheltenham Town manager Michael Duff; the Robins League One fixture with Portsmouth having been postponed due to international call-ups.

As well as those three, Rovers favourite Byron Anthony was also spotted in the surrounding area of the Mem and the Swansea City coach would likely would have been impressed by the performance of fellow Welshman Aaron Collins.

The flash of the front four

Understandably Evans will get the plaudits for his delightful turn in the lead up to his goal, but there were plenty of others who showed their flair on the crisp Mem surface.

Collins has certainly struggled to flaunt his attributes in the quarters since joining from Forest Green, but his 78-minute performance on Saturday felt like a turning of the tide.

Deployed in a free attacking role, the Welshman was able roam round the pitch in search of spaces and he certainly found and exploited one that led to the opener.

Working in tandem with Harvey Saunders, who used his body to prevent a Carlisle clearance from a Rovers goal kick, Collins showcased his expert close-control to keep the play alive and flick the ball over Jack Armer and drive into the middle of the pitch and 10 seconds later the ball was in the back of the net.

Evans, who was playing on the left of the front three, was lively all game and, on many occasions, got the Gas up the pitch with surprisingly impressive showings of agility and dexterity for a man of his frame.

At the point of the quadruplet was the tireless and indefatigable Saunders who chased every ball that was aimed in his direction and got the reward his performance justified with his goal in stoppage time.

And while it was a quiet afternoon by Harry Anderson’s standards, he gave many Gasheads a moment of joy with a ridiculous Cruyff turn in a dangerous area which bamboozled Brennan Dickenson, who certainly had an afternoon to forget at the Mem for more reasons than one.

Something that we learnt from the game on Saturday was that Carlisle midfielder Dickenson certainly holds grudges.

After being left red-faced by Anderson in the first-half, Dickenson saw his opportunity for revenge, steaming into a strong but fair sliding challenge on Anderson in front of the technical area mid-way through the second half.

As expected, this brought a strong reaction from the bench, in particular from Rovers first-team coach Andy Mangan who broke into a war of words with the former Exeter City and Colchester man.

Following an exchange of expletives, Dickenson ended the exchange by bringing his four fingers down onto the front side of his thumb, a very well-known insinuation of suggesting someone talks too much.

Clearly in the eye-view of many in the East Stand, Gasheads certainly let Dickenson know how they felt about the situation, so when he shanked his attempted clearance from the eventual throw, it was met by a chorus of ironic jeers aimed in his direction.

A closer look at the celebrations

Recent visits for Gasheads to the Mem have ended in disappointment, but their patience was rewarded with three wonderfully-taken goals on Saturday.

While the Rovers players were jubilant after Evans’ opener, their passion and togetherness were most evident for the two goals in the second half.

Following Sam Nicholson’s strike, the teams most experienced head Glenn Whelan gestured to all of the squad to come over and celebrate as a team.

And for Saunders’ stoppage-time finish, the scream let out by the 24-year-old after his funky chicken celebration, resembled relief combined with passion while Luca Hoole also gave two strong fists to the thousands celebrating in the Thatchers Terrace.