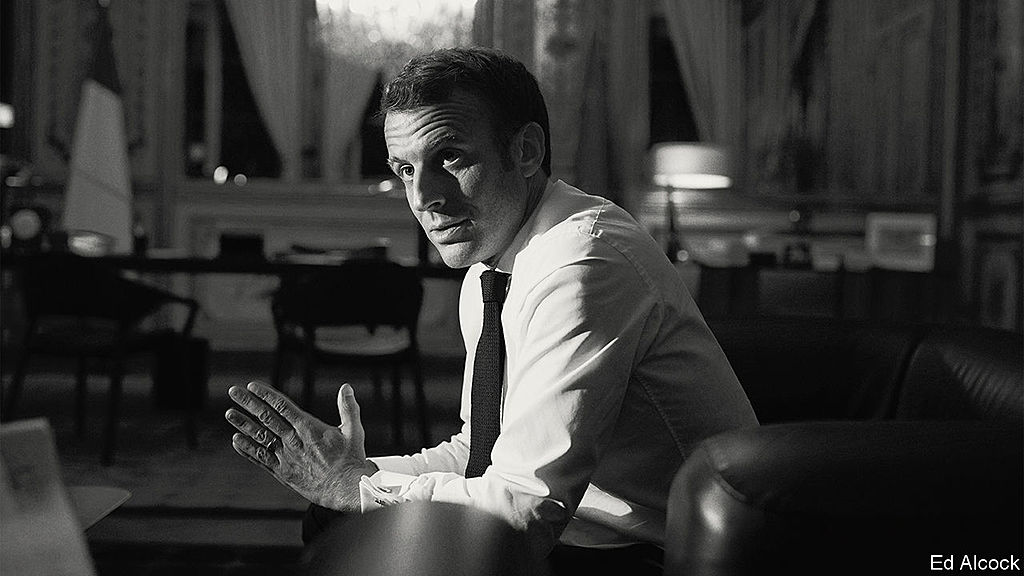 TODAY’S EUROPE owes its existence to the United States. America fought two world wars on European soil; American diplomacy was midwife to what became the European Union; American arms protected western Europe from Soviet invasion; and American statesmen oversaw German unification. Now, in a dramatic plea to all Europeans, France’s president, Emmanuel Macron, has warned that America is cutting Europe loose. The old continent is “on the edge of a precipice”, he warns. Unless it wakes up, “we will no longer be in control of our destiny.”

In his Elysée Palace office, Mr Macron spoke to The Economist in apocalyptic terms (see article). NATO, the transatlantic alliance, is suffering from “brain-death”, he says; Europe needs to develop a military force of its own. The EU thinks of itself as just a market, but it needs to act as a political bloc, with policies on technology, data and climate change to match. Past French presidents have argued that Europe cannot rely on America, and should look to France instead. Mr Macron is not just rehashing this view. He believes that America and Europe have shared interests and has worked tirelessly to keep good relations with President Donald Trump. But he argues that for the first time America has a president who “does not share our idea of the European project”. And even if Mr Trump is not re-elected, historical forces are pulling the old allies apart.

American priorities are changing. When President Barack Obama, who was intent on pivoting towards Asia, chose not to punish the use of chemical weapons in Syria it signalled that America was losing interest in the Middle East. Mr Trump’s recent abandonment of America’s Kurdish allies in Syria not only reinforced this, but also undermined NATO. America did not inform its allies, and Turkey, a NATO member, promptly invaded Syria. “Strategically and politically,” Mr Macron says, “we need to recognise that we have a problem.”

Asked whether he is confident that an attack on one NATO member would today be seen as an attack on all—the idea that underpins the alliance’s credibility—Mr Macron says that he does not know. He acknowledges that NATO thrives operationally, but he calls for Europe “to reassess the reality of what NATO is in the light of the commitment of the United States.”

Europe, he says, has yet to grasp the immensity of the challenge ahead. It still treats the world as if commerce and trade alone were able to ensure peace. But America, the guarantor of world trade, is becoming protectionist. Authoritarian powers are on the rise—including Russia and Turkey on Europe’s borders. While America and China spend vast sums on artificial intelligence, which they see as an essential component of their hard power, the EU devolves too much say to industry. Mr Macron warns that slow-moving, head-in-the-clouds Europe must open its eyes and prepare itself for a tougher, less forgiving world.

It is an astonishingly bleak picture for a centrist European politician and an avowed internationalist. But it is also unusually thought-through and, as far as Mr Macron is concerned, a spur to action. It is hard to overstate the scale of the change he is asking from his fellow Europeans.

Take defence. Mr Macron thinks that his new European Intervention Initiative and the EU’s Permanent Structured Co-operation, underpinned by the European Defence Fund, can integrate military operations and boost Europe’s capabilities, by implication providing a foundation for Europe’s post-NATO defence. But these building-blocks are rudimentary. America’s departure would leave vast holes in areas like air and missile defence, intelligence and surveillance, and aerial refuelling. Its military budget is twice as large as the rest of NATO’s combined. European governments will be reluctant to plug the gap, since they have other priorities. It may be easier to adapt NATO, so that it both protects Europe and is also more useful to the United States.

And then there is diplomacy. Mr Macron thinks Europe can best establish its global influence as a power that mediates between the gorillas of China and the United States. Its role will be “to stop the whole world from catching fire”, he says. A first step would be to get a grip on its own region by rebuilding relations with Russia—a task that he accepts could well take a decade.

Again, however, that ambition assumes a unity of purpose that the EU seldom achieves. Many of its members tend to shun hard power for a foreign policy focused on human rights and commerce. As Mr Macron’s Russian proposal illustrates, power politics requires you to deal with people whose actions you deplore. For him, realpolitik is necessary for European values to prevail. It is not clear his fellow European leaders would agree.

Last is industrial policy. Mr Macron wants the state to take strategic decisions over key technologies, and favours a policy to foster European champions. This tends to channel funds and contracts to politically connected incumbents. A better way to create a thriving technology ecosystem would be to encourage more competition. If Mr Macron will not embrace that, why should others?

The EU’s formula is unique: an arrangement between states, without any hegemon, that keeps the peace. But how do you get 27 countries—plus Britain, a big power now in the EU’s departure lounge—to agree to build fully functional armed forces, let alone convince Europe’s foes that they would ever be used? Mr Macron’s critics scoff that he is “drunk on power”. Some countries, including Poland and the Baltic states, would be alarmed at the idea of parting with America and pursuing detente with Russia. Others, including Germany, Italy and Spain, are too embroiled in domestic woes to entertain a grand global vision.

Plenty of times in the past, pious calls for Europe to make its weight felt in the world have turned out to be empty. This time, Mr Macron argues, must be different. He is asking his fellow leaders to imagine how Europe will thrive in a dangerous world without a cast-iron American alliance. How should they deal with Russia, with the conflict and religious fundamentalism roiling the Middle East and north Africa, and with the authoritarian challenge of China? He deserves an answer. ■

Briefing (November 7th): A president on a mission
Transcript: Emmanuel Macron in his own words
The Intelligence podcast: “He talked about Europe in almost apocalyptic terms”— Macron's interview