Speaking at a rally in Guwahati to mark the first anniversary of Himanta Biswa Sarma’s Bharatiya Janata Party-led government, he indicated West Bengal has become a hurdle before the Centre’s bid to check “infiltration” along the India-Bangladesh border.

“The Assam government is helping the Centre by standing like a wall against infiltration. This is why we are getting a lot of success in Assam. But there is no success in Bengal because of non-cooperation there,” the Home Minister said.

Mr Shah, who visited the India-Bangladesh border on Monday, said there were data to show that the cases of illegal migration got reduced substantially under the BJP rule since 2016. “Some works are left and once they are completed, infiltration can be completely checked,” he said.

He lauded the Assam government for clearing the encroachment of land belonging to the satras or Vaishnav monasteries. “As promised, about 10,700 bighas of satra land has been freed of infiltrators by the BJP government,” he said.

“We had also promised that we will not allow the smuggling of cows to Bangladesh through Assam. I can proudly say today that all doors have been shut. The smugglers are now afraid of the Assam police from Assam to Hyderabad,” he claimed.

Mr Shah also claimed some common features of Assam in the past, such as violence, agitation, insurgency have been replaced by peace, development, health and education under the BJP – first by former Chief Minister Sarbananda Sonowal and then his successor, Mr Sarma.

The reign of peace was the prime reason why the Armed Forces (Special Powers) Act was removed from Assam, he said. “After 30 years, AFSPA has been removed from 60% areas of Assam. Under Congress, AFSPA was extended 60 times,” he added.

Earlier in the day, he presented the President’s Colour Award to the Assam police for exemplary service during the past 25 years. Assam is the tenth state in the country to receive this honour. 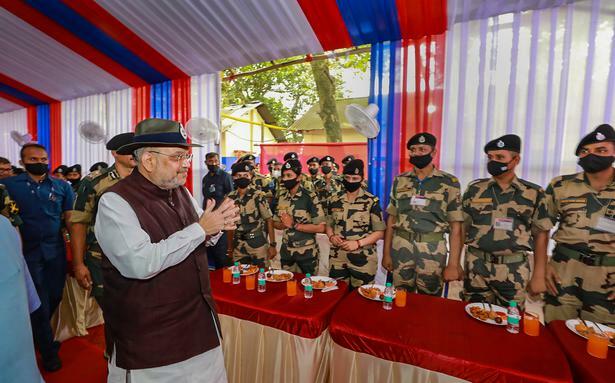 The Hindu
One subscription that gives you access to news from hundreds of sites
‘AFSPA to be revoked from all areas’: Amit Shah on improved law, order situation in Assam

The Assam Police has successfully tackled insurgency, border issues, rhino poaching to emerge as one of foremost police forces in…

Earlier Union Home Minister Amit Shah, who is on a two-day visit to Assam, awarded the Assam Police with the…