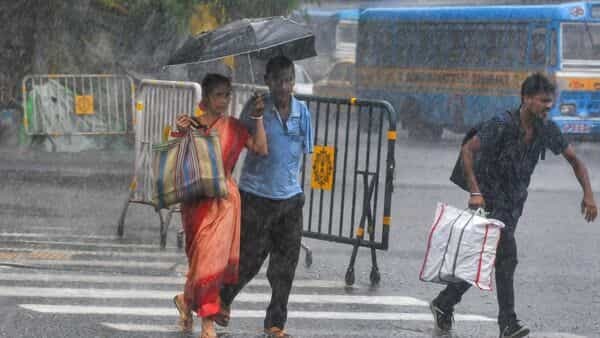 The Times of India
One subscription that gives you access to news from hundreds of sites
Cyclone Asani to weaken into low pressure over AP coast; Prakasam district receives extremely heavy downpour

The cyclonic storm Asani weakened into a deep depression and crossed the Andhra Pradesh coast between Machilipatnam and Narsapuram on Wednesday evening.

According to the latest bulletin by the India Meteorological Department, the system crossed the coast between 5.30 p.m. and 7.30 p.m. after weakening into a deep depression with a wind speed of 55 to 65 kmph. As of 7.30 p.m., the deep depression lay centred over the coast and adjoining west-central Bay of Bengal about 30 km from Machilipatnam and 40 km from Narsapuram.

During the next 12 hours, the deep depression would likely move along Yanam, Kakinada and Tuni coasts and it would weaken further into a depression by Thursday morning, as per the IMD. The sea would likely be very rough to rough on Thursday.

According to the Andhra Pradesh State Development Planning Society reports, Ojili mandal in Nellore district received a cumulative of 136.6 mm rainfall in the past 24 hours as of Wednesday evening.

Mandals in Nellore, Visakhapatnam, Prakasam, Kadapa, Guntur and Vizianagaram recorded over 50mm of rainfall each between Tuesday evening and Wednesday evening.

On Thursday, light to moderate rainfall will likely occur at most places in the coastal districts and heavy rainfall is likely at isolated places.

AP State Disaster Management Authority has set up 24-hour helplines 1070 and 1800 4250 101. The district administrations have geared up and disaster response forces were deployed in the coastal areas. Several flights and trains continue to remain cancelled due to the cyclone effect.

The coastal districts were on high alert in view of the cyclone. Chief Minister Y.S. Jagan Mohan Reddy directed Collectors to make necessary arrangements to mitigate damage due to the rains.

Maritime trade operations at the Kakinada deep-sea port and anchorage port were halted to avoid any untoward incidents and damage to infrastructure and ships.

The Times of India
One subscription that gives you access to news from hundreds of sites
Cyclone Asani to weaken into low pressure over AP coast; Prakasam district receives extremely heavy downpour