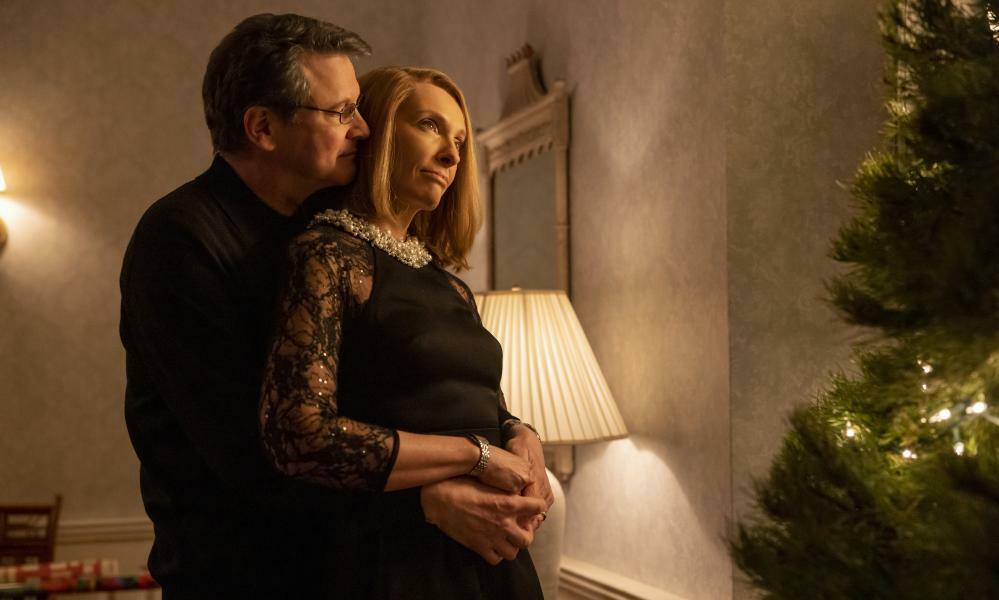 Manchester Evening News
Column: With Colin Firth and 'The Staircase,' HBO Max turns true crime into truly riveting drama
In these times of Extreme Peak TV, true crime is the streaming gift that keeps on giving.

Michael Peterson, who is played by Colin Firth in new Sky Atlantic drama The Staircase, pleaded guilty to killing wife…

As the The Staircase starts streaming on Binge, there is so much to discuss and unpack

Netflix might be on the nose, what with its plummeting share price and subscribers in freefall, but it still does some things well. Kudos to the streaming giant for showing The Staircase, the iconic, multi-part French documentary renowned for its incredible access as an American author fought a charge of murdering his wife by bludgeoning her to death and pushing her down the stairs. I'd heard about this much-lauded doco for years but never known, until now, how to watch it.

Now the fascinating story has inspired a drama series, The Staircase, which started streaming this week on Binge.

In short, Michael Peterson, an author and wannabe politician, was accused of killing his wife Kathleen Peterson in December, 2001. A French documentary crew started filming the resultant trial in 2003, their cameras allowed inside the court room, the filmmaker having almost unfettered access to Peterson, his family, and the defence team. But not the prosecution, who refused to play ball.

It was a situation almost unheard of and the riveting documentary revealed plenty, both good and bad for Peterson. But in the intervening years, the film has also been criticised for what it left out. Like the fact Peterson had an affair with the film's editor. Or that his lawyer's wife was a journalist who covered the trial and whose behaviour was criticised in court by Kathleen's family. Yet that criticism was edited out of the film.

The doco, released in 2004, is almost 20 years old. For me, it also stirred up strong feelings of nostalgia. The main players rush in the morning to read the newspaper for coverage of the trial. The newspaper! They have clunky mobile phones. There are video players. Social media, at least in the original film, is non-existent. The lawyers dress like the mum and dad from Home Alone. You know, like respectable adults.

Add to the fact that Binge on Thursday started streaming the HBO dramatised mini-series of The Staircase starring Colin Firth as Michael Peterson and Toni Collette as Kathleen Peterson and it's a case of too many staircases are never enough. [Firth is brilliant, absolutely Michael Peterson. And in another example of wonderful casting, Parker Posey plays prosecutor Freda Black. Seriously, a case of separated at birth.]

In real life, the quixotic and, undoubtedly narcissistic Michael Peterson maintained his wife was drunk and fell down the steps. He felt he was the victim of a witch-hunt by the district attorney, a frequent target of criticism by Peterson in his regular newspaper columns. The prosecution believed he bludgeoned Kathleen to death with a blow poke, a fireplace tool, because she found out he was bisexual. Another bizarre theory that got no air time in the documentary was that an owl attacked Kathleen inside the house and she fell down the stairs, feathers found clutched in her hand.

Michael and Kathleen had a blended family. Most of the children sided with Michael. However, Kathleen's biological daughter came to believe Michael killed her mother. The children were both fascinating and tragic. Two of the daughters were adopted, but looked identical to Michael's biological children. They were the daughters of a friend who died, apparently of a brain aneurysm, and was found at the bottom of a staircase. Michael was the last person to see her alive. So very curiouser and curiouser.

These two daughters, Margaret and Martha, were adopted by Michael and his first wife, the highly irritating Patty [an unintentionally hilarious character in both the documentary and drama series]. The girls had already lost their biological mother and father [he had earlier passed away]. Then Michael and Patty divorced. Now the woman they really knew as their mother, Kathleen, was dead. No wonder the girls clung to Peterson, figuratively and literally. They must have felt he was all they had left.

Now, spoiler alert, Peterson was found guilty of killing Kathleen and sentenced to life in prison. But that wasn't the end of the story. After he served eight years, one of the prosecution's main witnesses was found to have given unreliable testimony which led Peterson to seek a re-trial. And the French doco makers were there to record the next chapter.

In the end, Peterson entered an Alford plea to the manslaughter of Kathleen, a quirk of the American legal system where he maintained he was innocent but agreed the weight of evidence could lead to a conviction. He avoided a re-trial.

Kathleen's sister, Candace, was having none of that as she gave her infamous "Alford schmalford" victim impact statement, seething as she told Peterson whatever he called it, she called it murder.

Peterson is now a free man, based on time served. By all accounts he is back living in his home town, reporters love to say, in a house without a staircase.

The thing about the documentary is that it was all about Michael. The drama series is so satisfying, as if it is giving us the complete back story to characters we already know. The first three episodes have so far shown that Kathleen made all the money and was exhausted by the responsibility of providing for the family of now adult children. Hopefully, the series will continue to show more. More of Kathleen.

Manchester Evening News
Column: With Colin Firth and 'The Staircase,' HBO Max turns true crime into truly riveting drama
In these times of Extreme Peak TV, true crime is the streaming gift that keeps on giving.

Michael Peterson, who is played by Colin Firth in new Sky Atlantic drama The Staircase, pleaded guilty to killing wife…