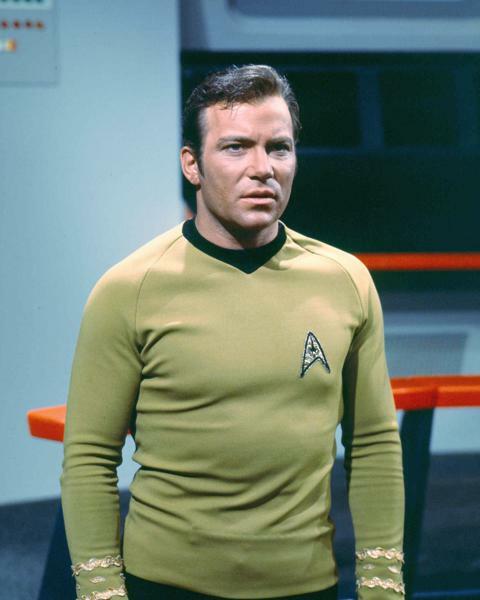 William. Shatner. Is now. The oldest. Man. Ever. in. space.

Or as the 90-year-old actor puts it, “I don't want to be known as the oldest guy who went to space — I'm bloody Captain Kirk, for God's sake!"

The actor, master of the Shatner pause, is indeed best known as Star Trek’s original Captain James T. Kirk. In swashbuckling style befitting Captain Kirk, Shatner successfully blasted into suborbital space on Blue Origin’s New Shephard. He received a hearty handclasp from billionaire Jeff Bezos; other potential astronauts can reserve a future seat here. The price of tickets has not yet been announced (a previous bidder paid $28 million.) However, rumor has it that Captain Kirk got comped.

However, the fantasy of space travel might be more fun than the reality. The good news is that a new museum show celebrating 55 years of Star Trek has just launched. Not everyone can be a space tourist, but there’s something for everyone, from Trekkers to casual pop culture fans, to enjoy at Star Trek: Exploring New Worlds.

The show will run from October 2021 through February 2022 at the Skirball Cultural Center in Los Angeles. It is fitting that the exhibition is in the film capital of the known universe. As the Red Hot Chili Peppers sing in Californication, “Space may be the final frontier, but it’s made in a Hollywood basement.”

The creativity behind Star Trek, from writers, directors, actors as well as set designers and prop masters working from a limited budget, is on full display. Props, costume, photos, and videos capture the fun of the enduring franchise.

There’s a captain’s chair to sit in and a transporter simulator to take pictures of yourself ‘beaming up.’ As you enter the exhibit, a photo of the late Leonard Nimoy greets visitors with his famous “live long and prosper” gesture, which he adapted from a traditional Jewish blessing. The exhibit shows how the series grew far beyond the “Wagon Train in space” pitch given by series creator Gene Roddenberry.

The navigation console from the original series, lovingly restored by Trekkers, has pride of place on the exhibit floor, with communicators, tricorders, phasers, and filming models of the USS Enterprise. There’s even a spinning wheel so you can construct your own Star Trek episode.

Costume fans will enjoy Spock’s tunic as worn by Leonard Nimoy, Lt. Uhura’s dress as worn by Nichelle Nichols and of course the open-chest tunic worn by Ricardo Montalbán in The Wrath of Khan. Other outfits include Captain Picard’s uniform worn by Patrick Stewart, a Borg costume and the rubber suit inhabited by the brutal alien Gorn, who battled Captain Kirk until Kirk ‘invented’ gunpowder.

While the original Star Trek shows are highlighted, there’s plenty of material from the many films, additional series and books. The Skirball will also be hosting a number of Star Trek-related events, like a screening of the film THE WRATH OF KHAN (a scenery-chewing Ricardo Montalban) with entertainment reporter Scott Martz doing a live interview with its director, Nicholas Meyer.

The show that broke barriers with an African-American and a Japanese-American on the bridge was a favorite of Martin Luther King. Its stars (particularly Nichelle Nichols, who played the iconic communications officer Nyota Uhura) later helped recruit a diverse new generation of NASA astronauts.

Star Trek, that featured television’s first interracial kiss in 1966, remains relevant today. According to CNET, “From the rise of artificial intelligence to the questioning of authority, [the current series, STAR TREK: PICARD] “tackles the big questions we're asking today.”

The optimistic Star Trek culture that created the world’s first 90-year-old astronaut is on full display at the Skirball. The gift shop is also full of Star Trek memorabilia, including clothing, books, knick-knacks, and toys. I picked up a phaser myself.

“For 55 years, Star Trek has portrayed a future in which diverse crews of humans and interplanetary species work together toward a common goal, strengthened by their members’ different cultures, abilities, and perspectives,” says Sheri Bernstein, Skirball Museum Director.

FREE to all on Thursdays