As inflation soars, how is AriZona iced tea still 99 cents?

But a giant, 23-ounce can of AriZona iced tea still costs 99 cents, the same price it has been since it hit the market 30 years ago. Today, that’s cheaper than most bottled water, 20-ounce sodas, iced teas and canned coffees on the market. If you could fill your car up with cans of AriZona Green Tea with Ginseng and Honey, it would be cheaper than L.A. gas by nearly 40 cents a gallon.

How does AriZona pull this off while everything else goes up? The price of aluminum has doubled in the last 18 months. The price of high fructose corn syrup has tripled since 2000. Gas prices are pumping up delivery costs. One 1992 dollar, adjusted for inflation, is worth two 2022 dollars. But the 99-cent Big AZ Can, as the company calls it, persists.

The short answer: the company is making less money. The big cans are still profitable, but for the moment, they’re much less so than a few years ago.

Don Vultaggio, the 70-year-old, 6-foot-8 founder and chairman of the company, is choosing to take a haircut in order to keep the price flat and cans moving.

“I’m committed to that 99 cent price — when things go against you, you tighten your belt,” Vultaggio said on a Zoom call in early April from his headquarters on Long Island, N.Y. Even though his costs are higher, “I don’t want to do what the bread guys and the gas guys and everybody else are doing,” Vultaggio said. “Consumers don’t need another price increase from a guy like me.”

He has the power to make a call like that because AriZona is one of the few independent private companies remaining in the consolidated world of nonalcoholic packaged beverages, a market dominated by PepsiCo, Coca-Cola, and Keurig Dr Pepper, which owns Snapple.

Vultaggio, a Brooklyn native with the accent to prove it, got the idea for the tea company when he was running his route as a beer distributor in Manhattan. He noticed that people were drinking Snapple, even though it was freezing outside. He decided to get into the iced tea business then and there.

Today, he co-owns the company in its entirety with his sons, Spencer and Wesley, who serve as chief marketing officer and chief creative officer, respectively, and joined him on the call. Forbes puts their combined net worth at over $4 billion, all from AriZona, placing them among the thousand richest people in the world.

The company sells about 1 billion 99-cent cans each year, Vultaggio said, which makes up about 25% of its total revenue. Its fruit drinks, energy drinks, bottled teas, snacks, hard seltzer, and other offerings move less volume, but have higher prices and higher margins.

When Vultaggio started out, Snapple also charged 99 cents for its signature 16-ounce glass bottles. AriZona was cheaper, but only because it contained 50% more tea per can. Now, a Snapple’s $1.79. An 18.5-ounce container of Gold Peak, Coke’s brand, costs $1.99. Pure Leaf, the upscale Pepsi-Lipton label, goes for $2.09.

AriZona products commanded nearly 16% of the ready-to-drink tea market in the U.S. by volume in 2020, second only to PepsiCo’s slate of Lipton, Pure Leaf, and Brisk. That amounts to 255 million gallons of AriZona iced tea sold, according to data from Beverage Marketing Corp. — enough to fill Echo Park Lake 10 times over.

AriZona’s 30-year run at 99 cents is exceptional, but the record for longest-holding beverage price still goes to Coca-Cola, which held the cost of a 6.5-ounce bottle at five cents for more than 70 years, from 1886 to 1959.

The Nickel Coke phenomenon developed in a different retail era, and grew out of a series of accidents: first, Coca-Cola agreed to sell its syrup to bottlers at a fixed price in perpetuity, thinking bottling was just a fad. Then, when the company managed to renegotiate, there was so much five-cent price advertising and so many vending machines that only accepted nickels that it took another couple of decades before Coca-Cola could break the nickel’s spell. The end result, however, was a world-spanning soft drink empire geared toward volume, not margins.

More generally, economists have shown that prices that end with a 9 are more resistant to change across the market, even when inflation is raging. Haipeng (Allan) Chen, a professor of marketing at the University of Kentucky’s Gatton College of Business and Economics, studied what happened to prices in Israel during a period of runaway inflation in the 1980s.

“If you look at these 9s, they’re much more rigid,” Chen said, as retailers resist edging up by one or two cents and losing the supposed psychological benefit of that final 9. But when they do jump, they jump big — 10 cents, to land on another nine, or even further. Surprisingly, this affinity for 9s holds even in online shopping, in which digital payments don’t require exact change.

Vultaggio has his own explanation for the 99-cent appeal. “It’s been like that since cavemen, the 99-cent price point was exciting then, and it’s exciting today,” Vultaggio said. “Something under a dollar is attractive,” and knowing exactly how much more a drink is going to add to your lunch offers a sense of security. “I started out as a blue collar guy, and budgeting your finances on a daily basis was a part of life.”

Another dynamic is likely in play with AriZona’s sticky price: a sense of trust. “It’s like a price-matching guarantee,” Chen said, “it says: trust me, I’ll take care of you, I’m not charging a horrendous price.”

AriZona has been committed to 99 cents since 1996, when it started printing the price directly on cans to stop retailers from raising prices on their own. But it’s tough to run a profitable business with a fixed price. AriZona has used scale, technology and constant tweaks to the business to keep costs down and revenues rising over the past 30 years.

Some of the key changes, Vultaggio said: back in the day, only one factory made the huge cans — now, there are multiple suppliers competing on price, and can technology has changed to reduce the amount of aluminum in each by 40%. The company has streamlined operations, using its own factory in New Jersey, which can churn out 1,500 cans per minute, for much of its product. Company trucks mostly make deliveries in the middle of the night to avoid traffic.

But the economics right now are brutal.

The company charges wholesale distributors a little more than $12 per 24-can case, or 50 cents a can (AriZona declined to share how much it charges retailers it distributes to directly, but distributors charge about 70 cents per can to their customers). With just that stack of pennies to work with, every cent counts.

The cost of aluminum has doubled in the last 18 months, from about $1,750 per metric ton to nearly $3,250 today. Shipping, taxes, and other expenses for aluminum ingots up the price again — and those premiums increased from about $420 per ton in April 2019 to more than $880 today.

With about 23 grams of aluminum per Big AZ Can, that means the price of metal alone has gone from nearly 5 cents up to 9.5 cents a pop — when you’re selling a billion cans a year, that’s $45 million down the tubes.

The Vultaggios declined to break down exactly how much their costs have risen per can. They did say that the company typically hedged aluminum prices to offset costs, but those hedges expired. Now, it’s exposed to the full brunt of the global commodity price.

The prices of tea, water, high fructose corn syrup, honey, citric acid, and flavorings have remained fairly flat in recent years, but over the long term the pressure has grown. High fructose corn syrup has risen from around 15 cents per pound at the turn of the century to more than 45 cents today, according to the U.S. Department of Agriculture, amounting to something like a 3-cent cost increase per can in the last 20 years. That small change, times a billion, equals an additional $30 million eaten away.

One of AriZona’s largest cost savings isn’t in the can or the corn syrup, however: it’s in the marketing.

“Most brands in America today believe they have to go out and have a Super Bowl commercial or do traditional advertising,” Vultaggio said. “When we first started, I didn’t have the money for that — so each can had to be like a billboard. That’s why I chose the big can. It stood tall.”

The eye-melting color combinations on the labels were designed with the same goal in mind. To this day, the company has kept its marketing budget to a minimum and its entire operation lean, with only about 350 people on staff at its headquarters and 1,500 companywide.

The brand name itself, and the pastel Southwest color scheme, were inspired by the aesthetics of Don’s wife, Ilene, who had already redone their home in a seaside New York City neighborhood in faux-adobe style by the time Don started the company.

“The name Arizona came to me because Arizona, when I was a kid was, it was dry. It was healthy. You had asthma, you moved to Arizona,” Vultaggio said. Ilene came up with the capital Z in the middle of the name. “Then it became comfortable to customers, because they’d heard of Arizona, so we got that kind of glow.”

Vultaggio didn’t make it to the Grand Canyon State himself until 1995 or so, but noted that he thinks the iced tea’s success has helped the state’s brand, at this point.

And the company has seen both the good and bad of its strong 99-cent brand play out in recent years. On the one hand, its low-cost and never-changing branding has turned it into a recognizable icon — the company can sell bucket hats and hoodies emblazoned with its can designs, Adidas has made an AriZona shoe, and for a whole month in 2019, celebrity chef Danny Bowien, of Mission Chinese food, turned his Brooklyn restaurant into an AriZona zone, with green tea and grapeade dishes and “Great Buy! 99¢" signage.

But when photos of its Canadian cans — which sell for $1.29 Canadian — make the rounds online, people tend to freak. A tweet that said, “If this world is coming, I don’t want to live in it,” with a photo of a $1.29 Canadian can, went viral in 2021. The company had to take to Twitter to reassure its customers, explaining the concept of exchange rates. “Don’t worry fam,” the iced tea company wrote. “We still got you.” 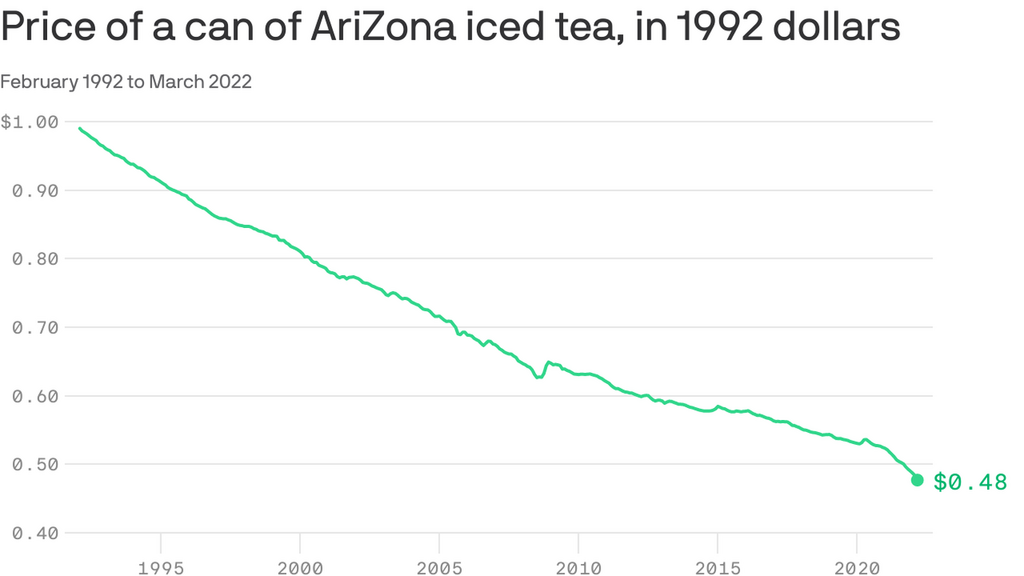 The price of AriZona tea hasn't budged for 30 years
The main force holding AriZona inflation at bay is the sheer stubbornness of its billionaire owner, Don Vultaggio.

Axios
One subscription that gives you access to news from hundreds of sites
5 Best Consumer Staples Stocks To Buy: Walmart, Coca-Cola And More

There is plenty of uncertainty and unpredictability in the stock market these days. Investors looking to play defense against rising…

A SHOC Energy, an energy drink that’s distributed nationally by Keurig Dr Pepper, has raised $29 million in a Series…

Fans of Nando's won't be happy

The popular unlimited refills offer on fizzy drinks will be affected

Liverpool Echo
One subscription that gives you access to news from hundreds of sites
Tata to expand NourishCo’s reach, add new products