As covid spreads to more cities in China, 40 crore placed people under some curbs

China is now battling the worst Covid-19 outbreak in the past two years, with infections popping up in more and more cities and no end in sight for the Shanghai outbreak that has left tens of millions of people shut inside their homes.

In the current wave which began in late February, restrictions and lockdowns in Shenzhen and some other cities successfully stopped the spread of the omicron variant in the community, allowing them to start opening up again. However other places are seeing flareups and instituting restrictions on movement to try and contain infections before they reach the crisis levels of Shanghai, which has had more than 20,000 new cases every day for more than a week.

That city has been totally locked down for two weeks, although many residents have been confined to their homes for much longer. Across China, some 373 million people, or a quarter of the population, are under some form of movement restrictions as authorities act aggressively to contain cases, according to a report by economists from Nomura Holdings Inc. earlier this week.

Those controls and the accompanying hit to consumption, industrial output and supply chains are already taking a toll on the world’s second-largest economy, and more lockdowns will only increase the damage. However, earlier this week Chinese President Xi Jinping reiterated the nation will adhere to the Covid Zero policy despite the hardships and protests it is causing, with the government adamant that the damage is less than what would happen if the virus spread uncontained across the country.

Here are some of the major places in China which are increasing restrictions, still in lockdown, or reducing controls.

Infections in Shanghai’s neighbor Suzhou are rising, with the local government locking down the city of Kunshan last week. That led to production halts at the factories of at least 30 Taiwanese tech companies there, including iPhone assembler Pegatron Corp.

However Suzhou’s municipal government said earlier this week that the city has no plan to lock down, trying to calm the fears of residents who had started stockpiling food just in case they were suddenly confined at home.

Taiyuan, the capital of the northern province of Shanxi, started increasing controls last week, and has now locked down six downtown districts where most of its 5.3 million people live. The hashtag “Taiyuan is hitting the pause button" went viral on Thursday night after state media used that euphemism to describe what was happening, echoing the phrase “slow life in Shenzhen" which was used last month to refer to that city’s lockdown.

The southern megacity and trading hub of Guangzhou is increasing curbs to try and stop the spread of the omicron variant, suspending in-class teaching for primary and middle school students and shutting some subway stations and many indoor venues. Over the past week there’s been more than 130 cases detected, but health officials have warned about potential wider spread.

Shanghai, home to the world’s largest port and large parts of China’s financial markets including the stock exchange, remains under a strict lockdown, with most of its 25 million citizens confined to their homes.

The seeming indefinite lockdown has shut down production at several car makers in the city, including Tesla Inc and Chinese EV maker Nio Inc, and also blocked trucks from making deliveries and caused delays at the port. In a bleak assessment of the supply-chain disruptions caused by the lockdown, He Xiaopeng, the chief executive officer of electric-vehicle firm Xpeng Inc. said Thursday that Chinese automakers may have to halt production in May if shutdowns persist in the area.

On The Way Out

The northeastern province of Jilin has successfully brought Covid’s spread under control through a one-month lockdown of its 24 million people. Authorities said Thursday that there were no reported infections in the community, meaning that all the more than 500 new cases were already in quarantine and thus contained. Often referred to as “zero community spread," this is a key metric for Chinese officials as they seek to achieve Covid zero and reopen their cities.

The success prompted local governments to start easing restrictions in various cities across the province, allowing factories to restart manufacturing. In the capital Changchun, production at the state-owned car company which is a partner to Toyota Motor Corp. and Volkswagen AG is set to restart after a month-long shutdown, local media reported Monday.

Xuzhou in eastern China has seen domestic infections return to zero earlier this week after its 9 million residents were put under lockdown two weeks ago. The local government has gradually lifted restrictions and resumed public transport, manufacturing and other business activities.

Tangshan and Langfang near Beijing also brought their local outbreaks under control, and have started to lift restrictions this week. 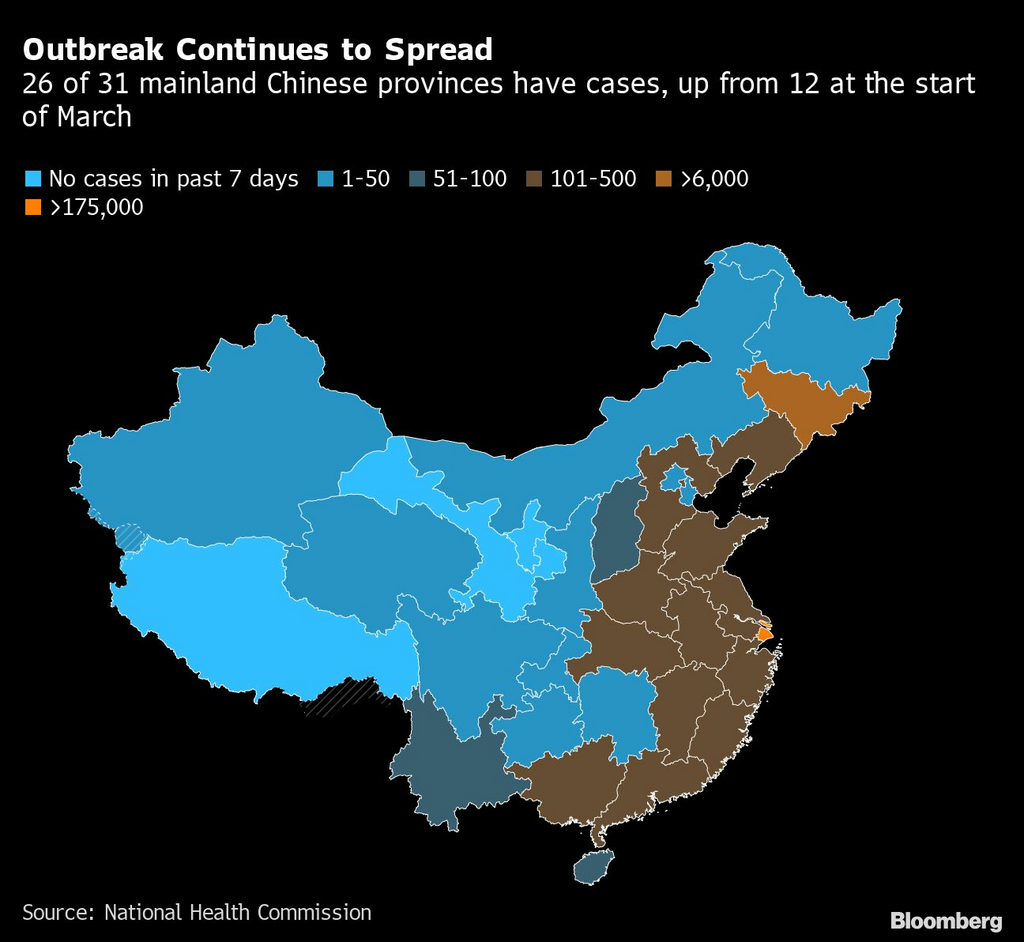 More Chinese Cities Look to Lockdown as Outbreak Spreads
China is now battling the worst Covid-19 outbreak in the past two years, with infections popping up in more and…

Bloomberg
One subscription that gives you access to news from hundreds of sites
Shanghai cases hit record, Xi moves to stop Covid rage but reiterates curbs

Shanghai reported over 27,000 coronavirus cases today, a new high, a day after President Xi said that the country must…