As Broadway returns, one play channels the emotions of 9/11 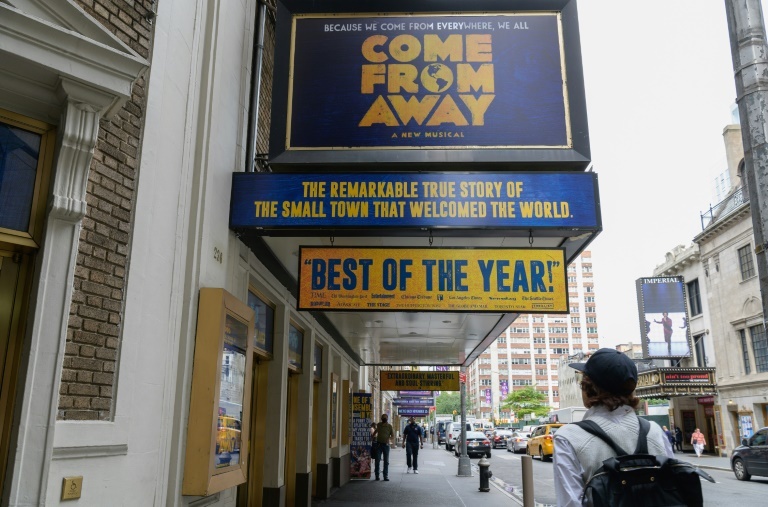 New York (AFP) - Broadway is back after an 18-month coronavirus shutdown, and for the actors of "Come from Away" there is added resonance: the show about 9/11 returns as New York marks 20 years since the attacks.

"I think it's sort of the perfect show for this moment because it emphasizes our shared humanity," Paul Whitty, one of the musical's actors, told AFP during a recent rehearsal.

"Come from Away" first came to Broadway in 2017 -- but its last performance was in March 2020, when Covid-19 brought New York City to an abrupt halt.

Some actors found themselves having to find other sources of income and a way to stay in shape and keep their passion for performing intact, all while locked down at home.

But Broadway, which generated around $33 million in sales per week before the pandemic across 31 shows, is gradually reopening throughout September.

Tuesday heralds a landmark moment when "Hamilton," "The Lion King," "Chicago" and "Wicked" all return on the same day.

"Come from Away," written by Canadians Irene Sankoff and David Hein, returns to the stage on September 21. A film version was released on Apple TV on Friday.

The show tells the true story of how residents of Gander in Newfoundland, Canada welcomed 7,000 stranded passengers whose planes landed there after US airspace was closed on 9/11.

"(It) is a really good reminder of kindness and compassion and grace, even in this time when it's very difficult," said James Seol, a newcomer to the troupe.

At a studio in Lower Manhattan, rehearsals are drawing to a close.Fifteen actors dance, sing and stamp their feet.Their reflexes have returned but above all is an impatience for the appreciation of an adoring crowd.

"I missed the audience.I miss connecting with them, sharing this story with them," said Q. Smith.

"In my dressing room, we can hear the rumblings of the audience filtering into their seats and sometimes the band warming up.I missed that a lot.It's my favorite thing," she added.

New York's performance venues began reopening in the spring but various restrictions meant it wasn't worthwhile for most Broadway League-affiliated theaters to return, until now.

For the actors, the unprecedented shutdown was a leap into the unknown.

"It was really tricky," said Smith, whose savings started to dry up towards the end.

But the extended break also reinforced her appreciation for her work.

"I will never (again) complain about being tired after eight shows a week.I just have a renewed joy for performing now.I'm so excited to get back on stage.I cannot wait," she told AFP.

Seol, 43, turned to giving private lessons during the shutdown, but he never thought of stopping his artistic career entirely.Whitty wondered if theaters would ever reopen.

"I was trying to figure out other ways to be creative and to feel like I had some purpose," Whitty recalled.

"I immersed myself in a lot of music.I really was practicing piano a lot during the pandemic.Just little ways to stay sort of artistically active instead of just streaming Netflix all day at home," he said.

The first show of "Come from Away" is sold out.Producer Sue Frost is optimistic about the rest of the run even if international tourists still cannot visit New York because travel to America remains closed for many countries.

"We were very encouraged when we looked at the zip codes of people who are purchasing tickets.It's people from up and down the east coast," she said.

"I think there's going to be domestic tourism.It's going to come back much stronger than anybody anticipated.I believe we're strong enough to weather this storm."