As Albanese heads to the Quad, what are the security challenges facing Australia's new government?

Extreme weather events are the new normal. The use of nuclear weapons by Vladimir Putin’s Russian military is now an unthinkable possibility. And Xi Jinping’s China, our largest trading partner and rising superpower, is pulling down the shutters.

So no pressure then, for our freshly-minted 31st prime minister as he flies into the Quadrilateral Security Dialogue in Tokyo this week.

The immediate challenge facing incoming Prime Minister Anthony Albanese and Foreign Minister Penny Wong is to reassure allies and friends of continuity and certainty. But more than that, the change of government presents an opportunity to build confidence in Australia’s capacity, once taken for granted, for visionary leadership and humble decency.

Remind me, what is the Quad?

The Quad involves India, Japan, the United States and Australia. It began in 2007, under George W Bush and John Howard, but during Kevin Rudd’s time, Australia pulled back because of concerns about America’s approach to China.
Prime Minister Turnbull revived the arrangement in 2017 as concerns mounted about China’s military expansion in the South China Sea. In March 2021 the Quad leaders issued a joint statement. “The Spirit of the Quad” spoke of a “rules-based maritime order in the East and South China seas” that supported a “Free and Open Indo-Pacific”.

Read more: Explainer: what exactly is the Quad and what's on the agenda for their Washington summit?

At this week’s meetings, Japan and India will be looking for signs Australia is serious about engaging with Asia. Another old friend with deep and long-established links in Asia, France, will be looking for signs of a reset. The US will be reviewing its expectations of what Australia, under a Labor government, is prepared to contribute to both the Quad security dialogue and to the AUKUS trilateral security pact.

Albanese and Wong share much in common with US President Joe Biden and Secretary of State Antony Blinken. Their face-to-face meetings this week in Tokyo have the potential to reset the allies’ approach to China and the Indo-Pacific well beyond what was every likely or possible under Donald Trump and Scott Morrison.

One of the greatest challenges of our time is to reverse the slide in relations between China and the West. The stakes are immense, not just for defence and security, or trade and the economy, but also global responses to climate change, and the future course of Chinese society and the lives of 1.4 billion people.

Biden and Blinken will also be looking for signs that the new Albanese Labor government is as committed to AUKUS as was the Morrison government. The revelation last week that, contrary to expectations in Washington DC, Labor was not consulted about AUKUS, raised doubts about the functioning of the security pact.

The operational details of how AUKUS could transform our immediate security environment, have also not been fully spelt out. As with the Quad, the potential benefits, and threats, to Australia go well beyond hard-core defence and security issues.

For decades, Australia’s engagement with Asia has lacked the sustained investment of financial, political, and social capital that is needed. Albanese says that he wants to change this, singling out Indonesia as a key priority for his government.

Despite living on the edge of the largest and fastest developing economies and societies on the planet, Australia has been far too lazy, shortsighted, and miserly about truly engaging with Asia. Our current woes with Chinese trade bans point to a failure to engage more broadly with both China and the rest of Asia.

Under Penny Wong, the Department of Foreign Affairs and Trade has the potential to play a critical role in securing Australia’s broader security interests. Wong’s personal backstory, as well as her formidable intellect, will be key assets in our engagement with Asia.

The challenges facing the new defence minister - understood to be Richard Marles – intersect tightly with those facing Wong. The shocking invasion of Ukraine by Russia, and the unexpected course of the war, contain many lessons for Australia. The first is the importance of international alliances and institutions, such as NATO and the European Union. Prior to Russia’s invasion of Ukraine, it was easy to be critical of NATO and the EU, and question their utility and substance. Not any more.

The Quad, AUKUS, ANZUS, and the Five Eyes intelligence alliance, together with ASEAN, are very different entities to NATO and the EU, but the war in Ukraine casts them in a fresh light. Diplomacy, trust and relationship-building are as critically important to defence and security as tanks, trucks and planes.

Other lessons from Ukraine

Australia’s next Defence White Paper, likely to be released in 2023, is going to be shaped by the both the rise of China and the decline of Russia. The experiences of the war in Ukraine, the critical role of logistics, the utility of certain kinds of equipment such as tanks, and the impact of organisational culture will be closely studied.

In all of this, there are challenges as well as great opportunities for Australia. Already it is clear that intelligence, IT and drones have played a critical role in defence of Ukraine. Australia has considerable capacity to innovate and develop related critical systems, hardware and technology, to the benefit of both national and regional security.

It should go without saying that Australia needs to both prepare for war and to do everything that it possibly can to avoid war. The later depends very much on the former, together with diplomacy and relationship building.

War, in the worst-case scenario, constitutes an existential threat. So too does climate change.

The remarkable outcomes of the 2022 federal elections point to the realisation of millions of Australians that more frequent and severe, fire, flood, drought and intense heat events represent an immediate security threat.

Neither the LNP nor Labor intended for this to be climate election. But it clearly was. This was an instance of ordinary voters being well-ahead of the leaders of the two larger parties.

The impacts of climate change will contribute directly to political and social stability in our region. Crises in food and water security, rising sea levels and severe weather events, and an increased impact of animal-to-human diseases such as COVID-19, mean that responses to climate change are integral to managing national and regional security.

The nation and the region is watching and looking to the new Australian government for leadership on security and this includes climate change.

Read more: The teals and Greens will turn up the heat on Labor's climate policy. Here's what to expect

Greg Barton receives funding from the Australian Research Council. And he is engaged in a range of projects working to understand and counter violent extremism in Australia and in Southeast Asia that are funded by the Australian government. 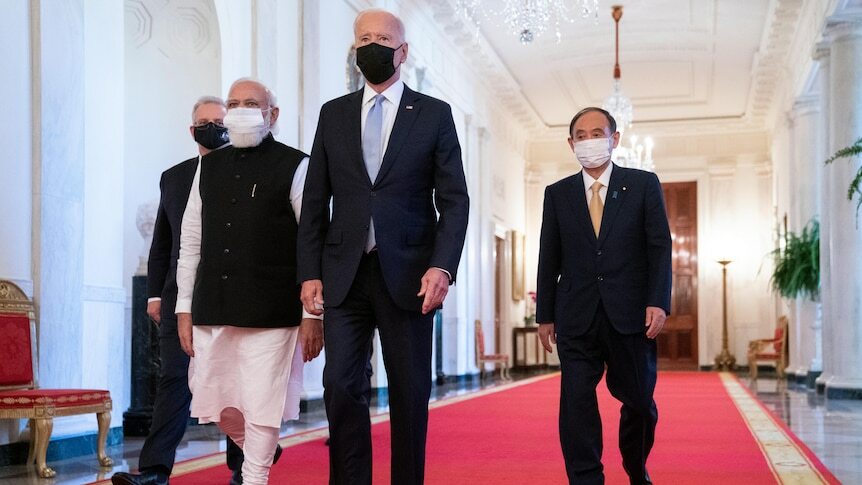 What is the Quad? What will they discuss? Why is it important Anthony Albanese attends?
Anthony Albanese's first order of business as Prime Minister was travelling to Japan to attend a leaders' meeting with the…

Australia's new Labor government will put greater focus on relations with Southeast Asia and climate change, an issue crucial to…