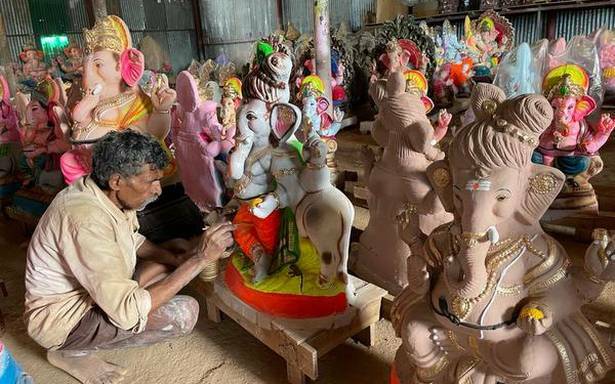 Demand for eco-friendly Ganesh idols has gone up in Bengaluru and also other parts of Karnataka. This is on account of restrictions on public celebrations and also awareness about environmental issues.

People were uncertain about the Karnataka government giving permission for public celebrations of Ganesh Chaturthi festival on account of restrictions in the State to prevent the spread of COVID-19. Following persistent demand for public celebrations, Chief Minister Basavaraj Bommai chaired a meeting on September 5 with his Cabinet colleagues and experts to discuss the issue.

After the meeting, the Karnataka government announced relaxation of curbs on public celebrations of Ganesh Chaturthi festival and permission to place one idol in each ward in the limits of city corporations, including Bengaluru, but restricted the number of visitors at any given time to 20.

The government has imposed over a dozen restrictions on public celebrations of the festival. Public celebrations were permitted only for five days. In its revised guidelines, the government clearly stated that height of idols placed in public places should not be more than 4 feet and the limit for those in houses is 2 feet. Organisers have to obtain permission from local municipal authorities for placing idols in public places. Organisers or committee members have to produce COVID-19 negative reports and vaccination certificates.

Following the announcement of the guidelines on September 5, idol makers have been inundated with orders. Up until the meeting, they were on tenterhooks fearing curbs on celebrations and poor demand for idols. But now, they are unable to keep up with the demand for idols. They are working round-the-clock to come up with idols.

Last year, idol-makers had a tough time following curbs on public celebrations. They feared a repeat this year and were staring at a bleak future as the festival season is when they earn the biggest part of their annual income.