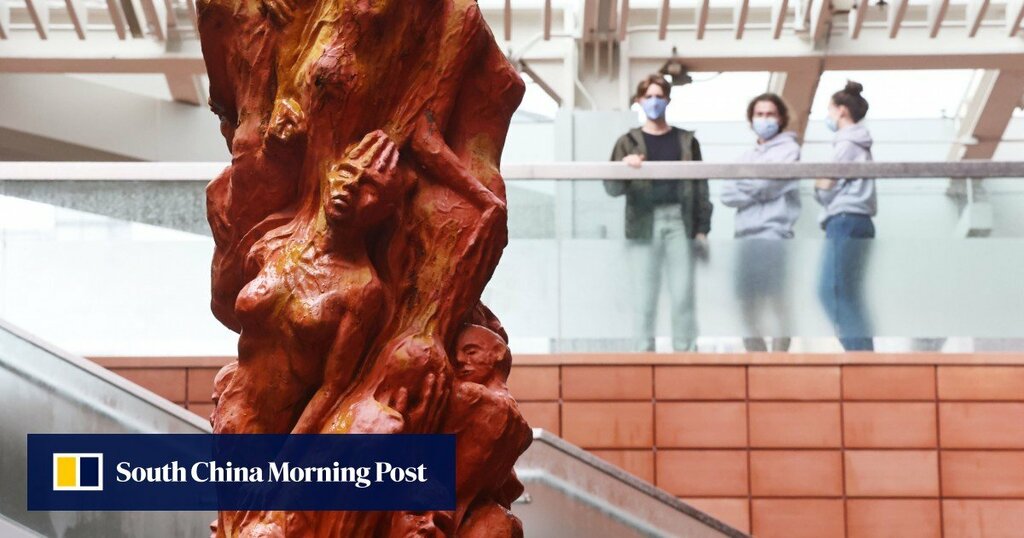 A Danish artist who created a sculpture remembering the victims of the Tiananmen Square crackdown has sought diplomatic assistance to help relocate the memorial overseas after Hong Kong’s top university ordered its removal from campus.

Jens Galschiøt said he was talking to politicians from his home country as part of efforts to safely ship the Pillar of Shame out of the city, as he revealed his lawyers had formally requested the University of Hong Kong (HKU) arrange a hearing to review its controversial decision.

In a last-ditch bid to save the artwork, Galschiøt warned he would hold HKU responsible for any damage to the eight-metre statue after the university set a deadline for its removal at 5pm on Wednesday, after which it would be deemed abandoned property.

The artist has previously said that the two-tonne sculpture, first erected on HKU’s Pok Fu Lam campus in 1997, effectively belongs to him but is on permanent loan to the now-defunct group that organised the annual candlelight vigil commemorating those who died in the 1989 crackdown in Beijing.

“The lawyer and I will try to resolve the situation amicably and with satisfaction for both parties if possible,” Galschiøt said in a statement on Tuesday.

“Of course, I hope that my ownership of the sculpture will be respected and that I will be able to transport the sculpture out of Hong Kong under orderly conditions and without it having suffered from any damage.”

The artist also revealed that several members of the Danish parliament he was in contact with were dialling up the pressure on the country’s foreign ministry to intervene in the matter, while demanding the Chinese embassy offer “necessary help to bring the sculpture out of Hong Kong [so it] can be erected in a safe place”.

“I am, of course, deeply concerned that … it will not succeed and that the sculpture will be destroyed in connection with the move. I would like to emphasise that I consider any damage to the sculpture to be the responsibility of the university,” Galschiøt added.

He said it took him and three assistants about three years to create the “invaluable” piece of art, which he described as having an astonishing history. The artist estimated that a replacement would cost at least €1.2 million (US$1.4 million).

HKU earlier explained that its decision was based on an assessment of legal risks in light of the recent disbandment of the Hong Kong Alliance in Support of Patriotic Democratic Movements of China amid a national security investigation. The alliance was the long-time organiser of the June 4 candlelight vigil in Hong Kong commemorating the Tiananmen crackdown.

While the university said the Pillar of Shame was owned by the alliance, Galschiøt argued that the sculpture was only on permanent loan to the group in the absence of any purchase contract and that, in principle, it belonged to him.

Ahead of Wednesday’s deadline, Richard Tsoi Yiu-cheong, the liquidator of the now-defunct alliance, said it was more appropriate for HKU to liaise directly with Galschiøt’s lawyer now that the artist had openly declared his ownership of the statue.

But Tsoi argued that the university had a social responsibility and duty to retain the statue and to continue allowing its display.

A HKU spokeswoman said on Wednesday the university was still seeking legal advice and working with relevant parties to handle the situation in a lawful and reasonable manner.

A source from the university said the school had no plans to take action in removing the pillar by the deadline on Wednesday, adding it would need more time to deliberate its next move now there was an extra factor to consider.