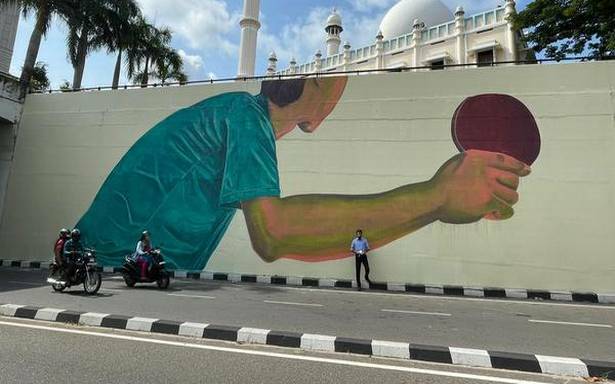 Splattered with paint from head to toe, Anpu Varkey’s eyes crinkle in a smile as we, masked and socially distanced, settle in the lobby of Hotel South Park to talk about her huge mural that is coming up on two walls of an arterial underpass at Palayam in Thiruvananthapuram.

Part of the Arteria 2021 Edition, conceptualised by the Kerala Government’s Department of Tourism and Steel Industrials Kerala, to beautify public spaces, there are 19 artists at work on the project curated by Ajith Kumar and Aneeta Rose Abraham. Each artist has chosen a space.

With just an umbrella for protection from the sun and the rain, Anpu was mostly perched on a crane to complete her 3,500 square-foot mural.

“I chose the underpass because it was challenging. A double-sided wall that people would have to look down to view. It is a different kind of viewership. It was a challenge to connect the two walls. Till now, I have been painting walls that passers by look at laterally.”

She had to conceptualise the work for the space in four days. More than trying to make her work culturally relevant, she wants it to resonate with the place she is working on. “On top of the underpass, there is a small space where protests are held. I thought it would be interesting to have this play of tossing and turning for my work.”

The painting (using acrylic emulsion) of two sets of table tennis players playing against each other connects the two opposite walls and there is a visual play too. Anpu has deliberately concentrated on the motion and the stance of the players instead of their faces.

“When we protest, argue or fight with our friends, we have a certain stance, there is always a for and against, how we toss ideas and statements around, maybe how we procrastinate… you could read many things into the work.”

Prior to this, Bengaluru-based Anpu has painted her large signature murals for the Kochi Biennale and the ongoing ‘Lokame Tharavadu’ exhibition in Alappuzha in Kerala. A graduate of the Baroda School of Art, Anpu had no plans of becoming a street artist. She was introduced to the genre through a festival in Delhi, a decade ago. Anpu enjoyed the challenge of painting in public spaces.

“I want to paint works that have feelings, emotions and evoke a response in viewers. It did not come easily. Each city and street corner is different. The way a tree stands in front of a wall could decide how your work will be.”

Instead of pre-planning everything, she lets the site and the surroundings guide her. The response to her works motivates her. Anpu avers that artists should push the boundaries of what they depict on the streets. “This is not just beautifying or social messaging. All that might be there but I try to bring in an emotional element. Minimalism works and I draw less, draw enough to guide the eye and leave the rest to the viewers.”

She believes that what an artist can do on the streets is amazing because he/she can titillate people’s senses. “The reaction to it is what I look out for. An artist just paints and leaves. The people live with the works and take ownership of it.”

Anpu says her understanding of street art is an exploration of her journey as an artist, where she wants to challenge people. For the artist, working on the streets is also a way of taking “ownership of your life and not waiting for someone to guide you”. The artist recalls the time when she had a studio and was doing giant portraits, not many were interested in her work.

Curators wondered how to promote her work as it did not have any feminist, environmental or socially relevant elements.

“This is my life and my art. I decide what I want to do. The art market is a certain kind of space where you might have to adhere to curatorial perceptions. I do not need validation for my works and street art gives me that confidence.”

Anpu has created a graphic novel without dialogues, Summer’s Children. The silent book narrates a story of “memory and loss” through rich, evocative illustrations. Set in Pala, where she was born, the book unfolds the story of a childhood spent in the lush, verdant greenery of Pala. Anpu says the story was with her since childhood and after her studies, she decided to turn it into a picture book. The book did not enthuse publishers and so Anpu took the self-publishing route. “That is the power I get from working on the streets. I do not have to wait for someone to validate my work. I believe the silent book would break language barriers.”

She says the thought of people accepting her as a “worker on the street” enthuses her.

“In Alappuzha, there were not many women hanging out on the streets. My work lets me hang out in the streets, a luxury enjoyed by men. There was this chai ka adda (tea stall) and an autorickshaw stand. I would sit there for hours, charge my phone, have my tea…. That feeling of belonging is never going to return.”

She laughs when she says that being a street artist is not an easy choice. Sunburn, tendonitis and working in precarious conditions can be daunting. “When something needs to be done, you just go with the flow and do it. It can be scary when you look back.”