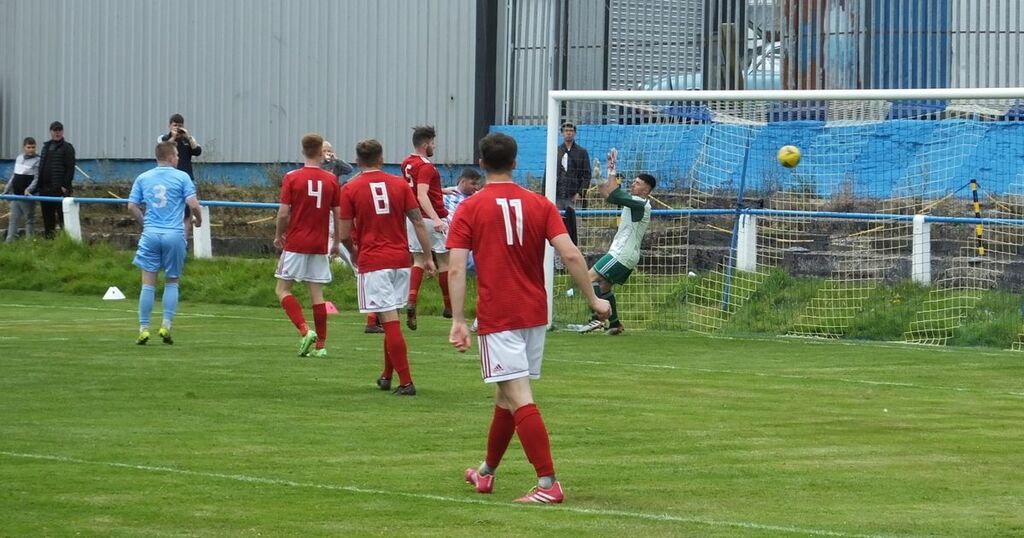 While Scotland were struggling to find a goalscoring touch against Moldova at Hampden Park on Saturday night, Barrhead side ‘Lie had no such trouble earlier that day as they slotted home five goals against their neighbours.

The game got off to a flier for the hosts after being awarded a penalty just 22 seconds in when Tam McGaughey was hauled down inside the box.

Gary Carroll held his nerve to fire Arthurlie in front, before Gary Smith doubled their lead on the 26 minute mark.

Burgh fought back to halve the deficit just before half-time when Sam Esplin fired home, but Arthurlie came out all guns blazing at the start of the second half and quickly made it four thanks to another Smith effort and McGhaughey’s fine finish.

Carroll grabbed his brace just after the hour mark, before Johnstone’s Malky McDonald netted a late consolation for the visitors who never truly looked like leaving Barrhead with any points.

The win sees Arthurlie maintain their unbeaten record in the WoSFL Conference A, currently sitting two points behind Shotts with two games in hand on the current league leaders.

Assistant coach George Fotheringham, deputising for manager Andy McFadyen on the weekend, was delighted the club’s enforced two-week break due to a postponement didn’t disrupt their rhythm.

He told the club’s media officer: “We got off to a good start when Tam McGaughey was brought down in the box for a stonewall penalty, which Gary Carroll scored.

“He’s got good composure taking the kicks but, to be honest, I can never watch them!

“If anything it (the enforced break) might have interrupted our momentum, because we really want to be playing every week and keep this run going.

“On the plus side, it helped guys like Lance Pearce and Michael MacNeil, who had been injured, get back fit.

“The boys worked hard and went 2-0 up before Burgh got a goal as a result of a blatant hand-ball just on half time.

“We told the players at the break that Burgh would come out and try and press them, but our boys just kept calm, took control and got three goals in a 15-minute spell.

“To their credit, Burgh tried to play good football. They have a few talented young players and play out from the back similar to ourselves.”

Despite missing Dale Simeon due to Covid-19, Smith and Carroll’s deadly braces proved again just why the Barrhead side are the top-scoring side in the division.

And Fotheringham believes the fixture list settling down, with no more midweek games, has also helped the club hit a consistent streak.

He added: “They both score goals for fun and play well off each other.