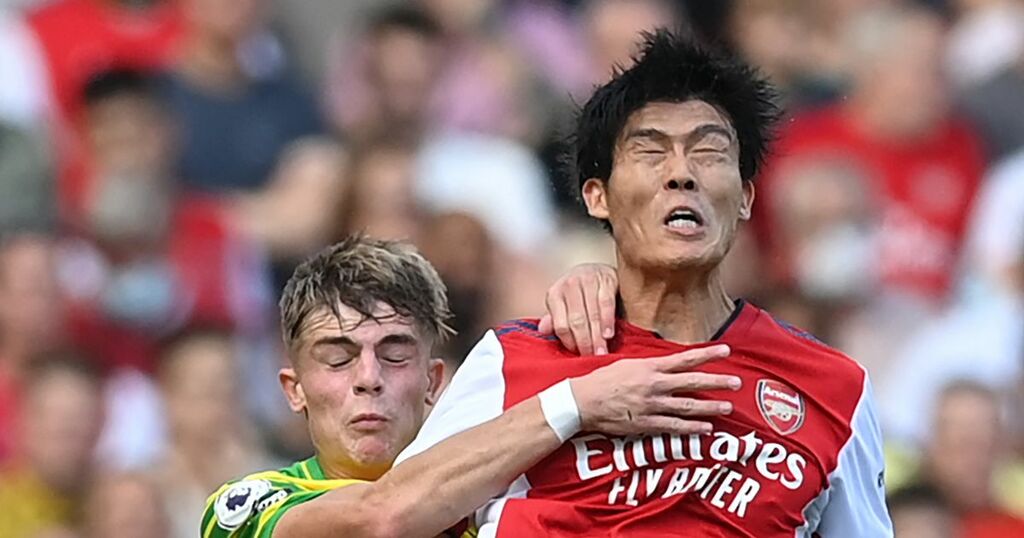 Takehiro Tomiyasu and Aaron Ramsdale made their Premier League debut for Arsenal on Saturday evening against Norwich and restored a sense of optimism among the fanbase.

Both of the new signings impressed as the Gunners won their first Premier League game of the season after a hard-fought 1-0 victory.

More interestingly the north London side also kept their first clean sheet in the league, with Tomiyasu and Ramsdale having a major part to play in this.

Arsenal’s backline have always been scrutinised for the lack of physicality the team impose but with these two new signings there seems to be more of a presence in the defence.

Mikel Arteta timed the debuts of Tomiyasu and Ramsdale perfectly considering Arsenal play Burnley in their next fixture, where Arsenal have been bullied in recent years.

However this may not be the case this time as Tomiyasu managed to win 7 out of the 8 aerial duels he challenged for and looked comfortable defensively. He won 88% of his aerial duels in the game against Norwich.

The Japanese international also has a frame which works in his favour being 6”2.

This is certainly different to the profile of right-backs Arsenal have had in the past, when you look at Hector Bellerin who was only 5”8 with a very slim build and was more known for his pace and agility rather than his robust defending and one-on-one duels.

Teams used to take advantage of this and look to isolate the Spaniard at times, so going into the game against Burnley it will be a match that Tomiyasu will relish.

Arteta’s timing of handing Aaron Ramsdale his Premier League debut should also be applauded. With the tough game against Burnley in the next fixture, the Englishman would certainly be the better choice over Bernd Leno.

Burnley play a very direct style of football which means there are a lot of aerial duels around the pitch.

This is arguably Leno’s biggest weakness as we have seen mistakes in the past from balls dropping from the air. We saw in Arteta’s first-ever home game as manager against Chelsea when Arsenal lost a 1-0 lead late in the game after Leno misjudged the direction of a cross which gave Jorginho a tap-in.

Even in the opening game of this season against Brentford, Leno was nowhere to be seen as Arsenal conceded from a long-throw into the box to seal a 2-0 defeat.

Ramsdale is certainly stronger and more reliable in the air despite being smaller and in his career, the Englishman has a better aerial success percentage than Bernd Leno.

With the Arsenal defence being so leaky in the first three Premier League games of the season, the physical presence of Ramsdale and Tomiyasu will certainly improve the confidence of the backline, just as we saw in the game against Norwich.