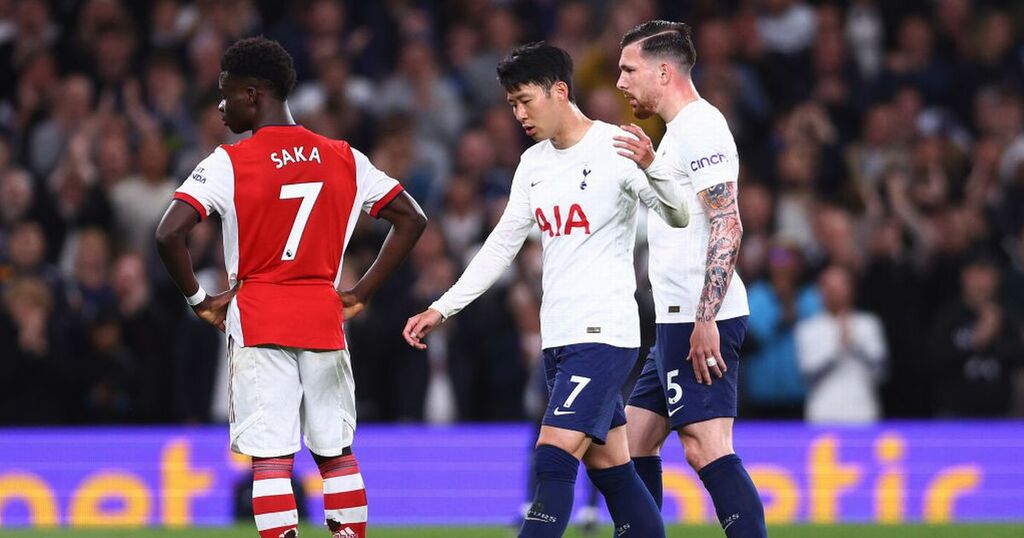 football.london takes a look back at the moments missed from the Gunners' defeat to Tottenham in the North London Derby

The latest North London Derby was one to forget for Arsenal as they crashed to a 3-0 defeat in a result that has kept the Premier League top-four race alive heading into the final two games of the campaign.

Already 1-0 down after Harry Kane sent Aaron Ramsdale the wrong way from the penalty spot, the Gunners' task of coming from behind to win a game for only the second time this season got even steeper just after the half-hour mark when Rob Holding was given his marching orders.

Having been booked for a succession of fouls on Son Heung-min seven minutes earlier, the Arsenal defender was shown a second yellow after being adjudged to have raised his elbow when blocking the Japan international's attempt to chase after a ball over the top.

To make matters worse for the Gunners, four minutes later Kane got free at the back post following a corner that was flicked on to double Spurs' lead and leave Mikel Arteta's side with a huge mountain to climb. From the visitors' point of view it was a poor and somewhat surprising goal to concede.

All season they have been strong when it comes to defending set-pieces and their improvement in this area has been credited to Nicolas Jover, who has been hailed as the club's best summer signing after joining Mikel Arteta's backroom staff following his Manchester City departure.

But it's now successive games in which Arsenal have conceded from a corner - the first being in the 2-1 win over Leeds United last weekend. However, some supporters and fans on social media have a theory as to why Kane's second goal of the night should not have been allowed to stand.

Before the corner from which Spurs scored, they were given a freekick for what referee Paul Tierney adjudged to be a foul by Bukayo Saka on Pierre-Emile Hojbjerg, but fans are adamant that the opposite occurred and that the decision should have gone in their favour - thus avoiding the sequence that leads to Kane scoring again.

@Silvester253 said: "That second goal, the foul was on Saka and not Hojbjerg", @rizzo_x8 said: "Clear foul on Saka just before their second goal", @Jason1112345 said: "Tottenham's second goal came from a foul given against Saka for being fouled lol", @gooner_steve123 said: "Here’s the “foul” by Saka that led to the 2nd goal. Clearly nicks it from Hojbjerg who steps on his foot. This led to a goal."

It's safe to say Granit Xhaka is in agreement with these Arsenal fans as football.london spotted the midfielder raising the issue with Tierney as the teams marched back to the halfway line for the kick-off as he could be seen pointing at where the foul took place to vent his frustration.

football.london takes a look back at the moments missed from the Gunners' defeat to Tottenham in the North London Derby