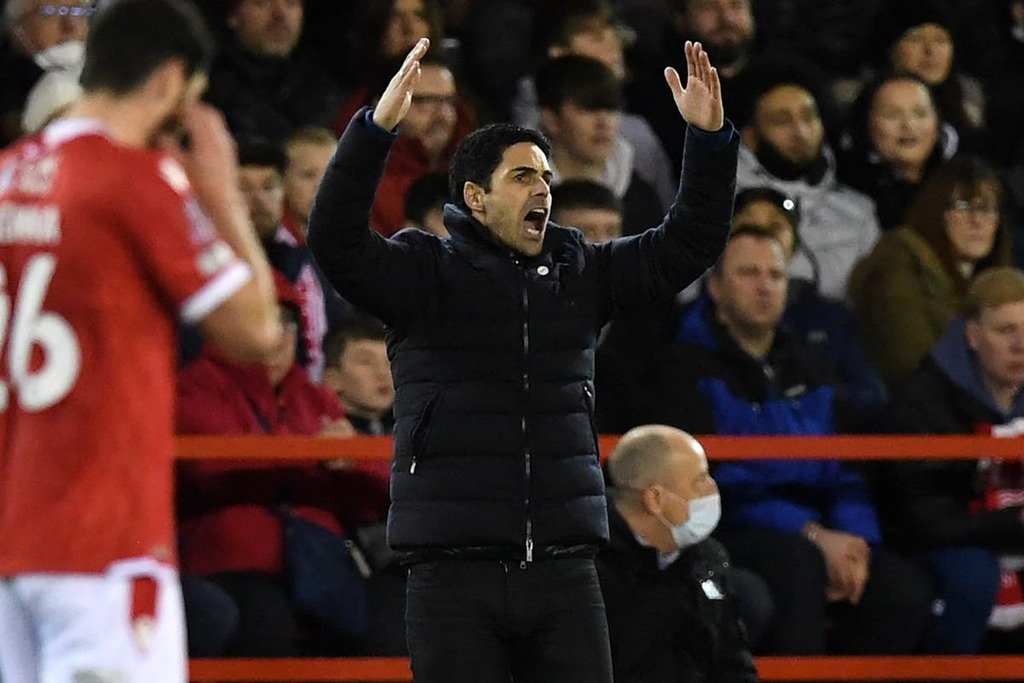 For Mikel Arteta, this was a familiar feeling. “It’s really hurting,” the Arsenal manager said, after he saw his side continue to beat along to the rhythm of boom and bust that has defined his reign so far.

Arteta is desperate for momentum but could only watch, exasperated, as his young team took another backwards step in their 1-0 defeat to Nottingham Forest in the FA Cup on Sunday.

His side have clicked into gear on several occasions this season, at times with spectacular and exciting results, but this was another painful blow, if not more of the same. The frustration was heightened, too, by the fact that it came so soon after the promise of their performance against Manchester City on New Year’s Day - a display which led to a rare moment of respect and recognition in defeat between players and supporters at the Emirates.

Arsenal were praised, quite rightly, for the intensity of their play in the 2-1 defeat to the Premier League leaders - a result that could have been so much more had it not been for five minutes of madness. Arteta may have made seven changes for the FA Cup third round tie but his side were unrecognisable to the one that had come so close to ending City’s winning run.

“Hunger”, “purpose”, “drive”, “determination”, all facets of what had made Arsenal so impressive as they took on Pep Guardiola’s team, but all singled out by Arteta as what his side lacked at the City Ground. It was a nothing performance, one encapsulated by Arsenal’s failure to land a shot on target and that their only significant action of the first half was the hooking of Nuno Tavares after just 34 minutes, who threw his gloves to the ground in disgust.

Arsenal needed more of that, albeit without the chaotic and erroneous passing of Tavares that had got him substituted in the first place. Arsenal missed Thomas Partey and Granit Xhaka and the midfield was lightweight with Albert Sambi Lokonga and the 18-year-old Charlie Patino, but there still should have been enough on the pitch with Bukayo Saka, Martin Odegaard and Gabriel Martinelli reprising their roles in Arsenal’s attack.

Arteta was very clear on what he felt was missing, but it only asks further questions of him and his ability to deliver consistency. There will be bumps along the road for such a young team, of course, but Arsenal have already been warned this season and only had to look at their defeats at Manchester United and Everton as examples of how they cannot allow themselves to sleepwalk their way into matches, falsely imbued by the promise of progress.

It could have been a different story this week. Had Arsenal’s Carabao Cup semi-final against Liverpool not been postponed then Arteta’s side could have returned to the Emirates galvanised by the reception they received after the City match, before taking to the field against Forest.

Where do those players stand now? An element of scepticism is sure to return after their FA Cup humiliation, and it adds significant pressure ahead of the trip to Anfield for the now rescheduled first leg of the Carabao Cup semi-final this week, as well as the north London derby against Tottenham Hotspur on Sunday.

The odds are that by that point Arsenal could very much turned the picture on its head once again. Already out of the FA Cup and with no European football to compete in, the Carabao has become Arteta’s only route to silverware this season and the importance of winning a trophy with this young group of players cannot be understated.

It’s why it made the defeat to Forest so disappointing, though, while also heightening the importance of their remaining cup competition. They will be favourites against a depleted Liverpool side who may have to turn to youth once again amid Covid-19 cases and international absences and anything other than reaching the final at this point would be a huge disappointment.

As for Spurs, it already appears set to be a fascinating clash, the first between Arteta and Antonio Conte and one that could be pivotal in the race for the top four by the end of the season.

Maybe Arsenal will find themselves with their feet off the ground once again by full-time. Maybe we will see that spark return, only for Arsenal to throw another howler into the mix the following Thursday when they welcome Liverpool in the return leg of their Carabao Cup semi-final. It all depends on which Arsenal turns up and we don’t know what to expect. Neither, it seems, does Arteta.