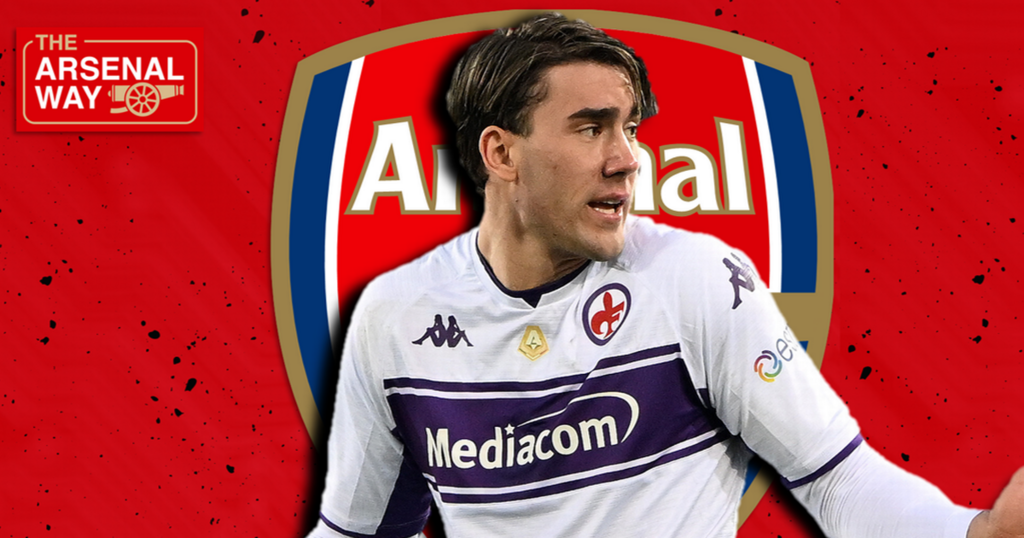 Arsenal are in the market for a striker during the January transfer window. With the controversy surrounding Pierre-Emerick Aubameyang and both Alexandre Lacazette and Eddie Nketiah's contracts set to expire this summer, it is no surprise the club have accelerated plans to move for a replacement this winter.

However, to the surprise of footballing fans beyond just north London, Arsenal are being linked strongly with a move for one of Europe's most sought-after players in Dusan Vlahovic. Furthermore, according to Sami Mokbel, the deal could cost the Gunners in the region of £150 million.

A huge amount of money and despite the player's clear quality, for some Arsenal supporters it is simply too much to commit to a 21-year-old.

The Arsenal Way's Bailey Keogh and Tom Canton are divided in their stances on the possible deal and provide their arguments as to whether the club should push ahead for or steer clear of Dusan Vlahovic.

Arsenal must avoid spending £150 million on Vlahovic, as the club should have learnt from the mistakes with the Nicolas Pepe deal.

While Vlahovic has certainly been excellent for Fiorentina over the last 18 months, this still is not enough to warrant such a major deal.

He is still only 21-years-old and has yet to play on the biggest stage of football in terms of the Champions League or a major international competition, so he should still be considered as unproven.

The Serie A is also an entirely different league compared to the Premier League in terms of style of play, so there is no guarantee that the Serbian would achieve the same success. You would also have to factor in the adaptation period, which Arsenal can’t afford to give time to, as the striker position is at a critical state which requires an immediate answer.

in 2020, Mikel Arteta said in an interview with Ian Wright that he should not have to do too much convincing for a player to join Arsenal otherwise he would not sign them, and with so much reluctance on Vlahovic’s end, he is going against what the Spaniard claimed.

If the Serbian striker had more experience and proved himself for a few more years, then spending £150 million on the striker would not have been a problem, but Arsenal have risked spending a large amount on a player in Nicolas Pepe who had also only proved himself for two seasons, which clearly has not worked.

There are alternatives for Arsenal such as Dominic Calvert-Lewin who has the necessary Premier League experience, and Jonathan David who has featured in the Champions League whilst previously showing affection towards Arsenal, which is topped off by his fee being a lot cheaper than Vlahovic.

If Vlahovic’s package cost £30m-£40m less than the £150 million that is being quoted, then it would be a no-brainer to sign him, but the current price that is flying around is far too expensive.

It is a huge amount of money. A staggeringly large amount that to think Arsenal football club are involved in this type of deal is nearly as unbelievable as the figures themselves.

Yet this strangely fills me with hope and confidence that the ambitions of Arsenal are finally beginning to match that of what the fan base has been asking for. For how long have we as Arsenal fans wanted to see the club back challenging for titles and European glory?

Arsenal made six shrewd additions in the summer and spent the most of any side. However, to be able to close the gap with Manchester City, Real Madrid and Bayern Munich, the Gunners will need to make historic and expensive deals and compete with those very clubs for the best players on the planet.

Vlahovic is considered in the bracket of young players who could become the best in the world. A 21-year-old matching the Serie A goal-scoring record for a calendar year set by Cristiano Ronaldo is no fluke. The record Ronaldo broke was set back in 1960. Think of the great strikers to have played Italian football in that time.

Arsenal fans often reference Liverpool as a side to emulate in the market. Self-sustaining and without owner investment. Smart moves that have propelled them to Champions League and Premier League titles.

Yet, the moves for Virgil van Dijk and Allison are often referenced as the turning point to their success. The Dutch defender joined in a record deal for a defender at £75 million. The wages across the four-year contract took the deal well past the £100 million total.

Completed nearly four years ago, transfer fees have only continued to rise even in the wake of a pandemic. Vlahovic represents Arsenal’s opportunity to add their own transformative figure to the team and they cost big money.

It will be a risk, all transfers are, but the potential reward for landing perhaps Europe’s best young striker bar Erling Haaland could be even greater for the club. Especially considering Arsenal’s ambitions to secure a top-four place.

Make sure you have subscribed to The Arsenal Way! The Fan Brands team along with plenty of your football.london favourites will be producing daily Arsenal content for you to enjoy including match reactions, podcasts, football fun and interviews. You can follow Tom Canton and Bailey Keogh from the TAW team to keep up to date with his work.