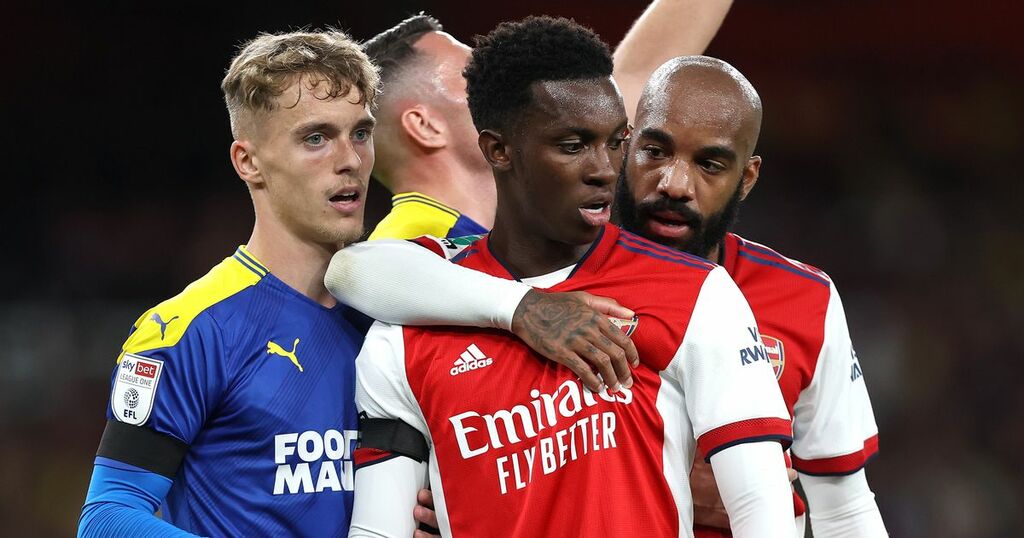 Despite the links to Gabriel Jesus hotting up in recent days, Mikel Arteta still faces a bit of a dilemma when it comes to solving a potential striker shortage ahead of next season. Arsenal have made a €50m (£42.6m) offer for Jesus and the player has told Manchester City that he wishes to reunite with Arteta this summer, according to GOAL Brazil.

However, the Gunners could still be in need of another centre forward if both Alexandre Lacazette and Eddie Nketiah leave once their contracts expire in June. The Mirror are reporting that Arteta is 'desperate' to keep hold of Nketiah, but the player has made it clear that regular game time must be guaranteed wherever he ends up.

If Jesus does indeed join the club, it's likely he will become the new main man up top, taking over from Pierre-Emerick Aubameyang. This would mean Nketiah will be second-choice and more often than not starting on the bench. Whether the 22-year-old will be satisfied with that remains to be seen, but considering how strong he feels about playing, I sense it may not be enough to convince him to stay.

Having to splash the cash on two new strikers is far from ideal, especially when there are other areas of the team such as wing, central midfield and full-back to strengthen. If the funds are made available then of course that's a different story and the situation becomes a lot easier to handle, but there is one alternative option technical director Edu can pursue if the worst comes to the worst.

A recent study by Ticketgum looked at fifteen of the highest valued free agents this summer and ranked them from high to low based on their performances this season via SofaScore's average player ratings. Eleventh on the list was Lacazette with a rating of 6.99. This isn't a surprise considering the Frenchman is experiencing his worst season in front of goal since joining Arsenal, scoring just six times in 34 appearances so far.

Five places below him in seventh is Torino's Andrea Belotti with a rating of 7.11. The Italian International has suffered a few injury setbacks this season but has still managed to bag 8 goals across 21 appearances. In terms of the study, no other striker is ranked higher other than Kylian Mbappe who tops the chart.

Belotti is a name many Arsenal fans will be familiar with, he has often been linked with a move to the Emirates and those links have failed to go away due to his contract expiring this summer. Torino chairman Urbano Cairo has said on several occasions that he doesn't believe the striker will extend his deal and that a move away is the most likely outcome.

"At the moment, he has not signed and I do not think he wants to sign. I made an offer that was beyond the capabilities of Il Toro, I cannot force him to do anything," Cairo told reporters last year. As things stand, nothing has changed and Belotti is set to become a free agent at the end of the season.

The 28-year-old has racked up 133 goals in 249 appearances for the Serie A side and has not only established himself as a reliable goalscorer but also a leader, which has seen him receive the captain's armband. His strong build makes him a perfect fit for the Premier League's physicality, while a dangerous aerial presence would add something a bit different to Arsenal's frontline.

Like Nketiah, Belotti wouldn't initially be guaranteed a regular starting spot if Jesus is also brought in. However, his impressive goal tally would put him in a much better position to provide competition in the striker department. Again, whether or not he would be willing to take that risk is another matter, but bearing in mind his age and statistics, Belotti on a free transfer may not be the silliest of moves.