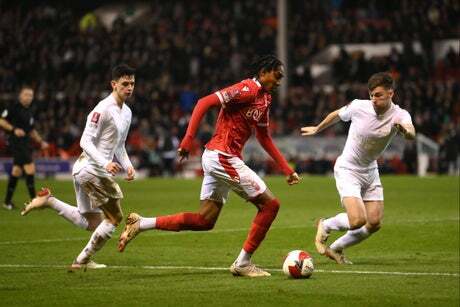 Arsenal were dumped out of the FA Cup by Nottingham Forest after Lewis Grabban scored the only goal of the game.

The Gunners were poor throughout the 90 minutes and they never really got going at all, failing to register a shot on target.

In the end, they were made to pay for their showing as Championship side Forest grabbed a deserved winner in the 83rd minute through Grabban.

Simon Collings ran the rule over Arsenal at the City Ground...

Arsenal’s best player on the night, but that is not something to really shout about. Made a few good saves, particularly from James Garner’s free-kick in the second-half.

The drop-off from Takehiro Tomiyasu to the Portugal international is stark. Wasn’t good enough in possession and struggled all night.

Not at his usual best and was prone to the odd stray pass. Defensively he did okay, though, and was better than some of the others on show.

Had a good old battle with Forest striker Keinan Davis, who was a real handful. Holding stood his ground, though, and was solid enough.

Taken off after just 30 minutes or so after a poor performance. Sloppy in possession and positionally he was getting caught out.

The Belgian’s first start in a while and he looked a little rusty. His pass was intercepted for what turned out to be the winning goal.

Put himself about a bit early on with some crunching tackles. Couldn’t really get into the game, though, and was taken off after 70 minutes.

One of the better Arsenal players during a poor performance. Created Arsenal’s best chance of the game when he picked out Nketiah with a cross.

You could see how frustrated the Norwegian was getting as the game carried on. Not able to influence the game as he usually does.

Lots of energy and work-rate, but not the level of performance he has been producing recently. Forest right-back Djed Spence kept him quiet.

Barely had a kick in the first-half and was just chasing loose balls. Missed a great chance in the second-half from a Saka cross.

On for Nuno, who was really struggling. A solid performance from the Scot.

Came on to play the No10 role but couldn’t get into the match.