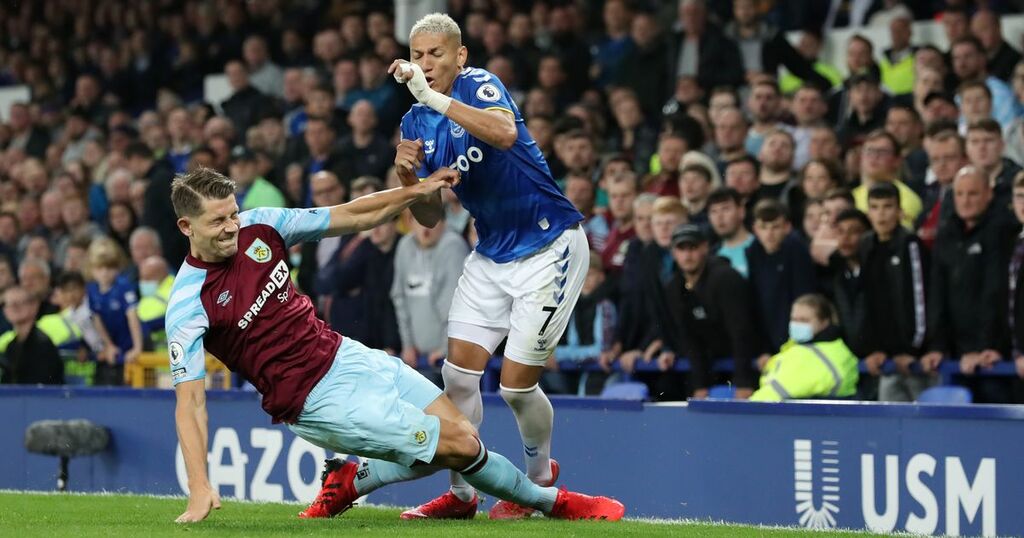 Arsenal will be hoping to make it two wins in a row when they travel to Turf Moor to face Burnley following their 1-0 triumph over Norwich City - but some fans are already worried.

The Clarets were in action on Monday night against Everton at Goodison Park and a few heavy challenges caught the eye of Arsenal fans for all the wrong reasons during the 3-1 defeat.

In the first half, Josh Brownhill challenged Richarlison from behind with a tackle not too dissimilar to the one that saw Liverpool's Harvey Elliott seriously injured against Leeds United.

Richarlison was the target again in the second period. Collecting the ball by the left byline, James Tarkowski lined up his next move and launched through both ball and man.

It received a large cheer from the away fans, but many, including Gary Neville, thought the defender should have seen red for the incident. In fact, neither player was booked for either challenge.

Neville told Sky Sports: "This for me has no place in football. If it had been given a red I don’t think you could complain if you’re Burnley and I don’t think we would have complained.

"I think it’s reckless, I think he knows he’s going to do him and knows his follow through could hurt him. I think it does endanger him, and I think Tarkowski goes to do him, as in leave it on him.

"I think this is a tackle referees are going to Stockley Park to assess the lighter touch and technicality of the game, first one maybe yellow - I don’t think they’ll get their knickers in a twist on that one - the second one I don’t think has a place in the game."

Arsenal have not had a lot of luck in the past when it comes to injuries. Thomas Partey, Kieran Tierney and Gabriel Magalhaes have all spent lengthy spells on the sideline with problems in recent months.

Understandably, Arsenal fans have backed up Neville's claims and are now worried about what could happen if similar challenges go unpunished when they face Sean Dyche's men on Saturday.

After a clip of Neville and Jamie Carragher analysing the incident was shared on social media side Reddit, fans of the north London club started responding, many of them highlighting what will likely be a key concern for Mikel Arteta.

Here is the best of what they had to say.

LegoMad2005 said: Saka, Pepe, ESR and Partey are in trouble.

Wudoh said: And then we are going to hear Sean Dyche moaning about diving and being soft after the game.

TuskEU said: One thing that's always annoyed me about us is that we never make it difficult for the ref anymore. When a challenge goes in, I want 4 or 5 players screaming at the ref. Get in his head, make him conscious of the fact the opposition are getting away with it. Only way to make sure they're gonna be fair.