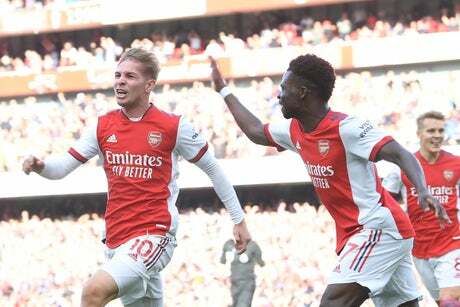 Emile Smith Rowe rode to the rescue for England Under-21s on Monday night and he and Arsenal team-mate Bukayo Saka are reaping the rewards of extra training during the international break.

Smith Rowe scored the game's only goal to save the Young Lions from embarrassment in Andorra, two days after Saka had netted for the seniors on the same pitch.

The Arsenal duo have been staying late in training with their club to work on their finishing and pick the brains of senior players such as Pierre-Emerick Aubameyang and Alexandre Lacazette, after manager Mikel Arteta called on them to improve their numbers in front of goal.

Smith Rowe's goal, his first for the U21s, came with England down to ten men following Rhian Brewster's controversial red card for an innocuous challenge which earned him a second yellow. After a quick break from Curtis Jones following an Andorra corner, the Liverpool man played in Smith Rowe who showed composure to slot into the bottom corner and spare manager Lee Carsley's blushes.

The winning strike was a product of his extra work at Arsenal's London Colney training ground and discussions with Arteta.

"[Arteta] has spoken to us and given us so much confidence to stay calm," said Smith Rowe.

"We know we're going to be getting into these positions. Because we're both young players we've got to stay as calm as possible and just focus on the goal really.

"We've been practising a lot in training, after training and we get the support from the experienced players in the team as well, they're always helping us. It's really good at Arsenal, we're really happy with the help we're getting."

The added practice is certainly working with Monday night's strike being a third goal in five games for club and country after bagging for Arsenal against both AFC Wimbledon and north London rivals Tottenham.

Gareth Southgate has spoken of how Smith Rowe is close to earning a first senior call-up and Young Lions manager Carsley hailed his cool head in front of goal, something the coach wants to exploit for as long as he is playing at this level.

"With any wide player they are always judged on goals and assists and Emile has got the ability to do both," said Carsley, who is unbeaten in his three games as U21s boss so far.

"I've seen him in training, the way he finds the corners and finishes very calmly, he finishes like a centre forward at times and the opposite to that is that he has got that last pass which is really important. That's why I'm keen on getting him in really attacking positions more often, the higher up we can get him and the more we can get him one-vs-one he'll create a lot of problems like he does at Arsenal."

Carsley admitted his relief after seeing Smith Rowe score. Days after surrendering a two -goal lead to Slovenia, his team struggled to create chances against an Andorra side largely made up of part-time players from the fourth and fifth tiers of Spanish football.