It's the second world record set at the Australian Championships after Zac Stubblety-Cook set a new 200 metre breaststroke record.

Ledecky's record of 3:56.46 was set nearly six years ago during the 2016 Olympics in Rio de Janeiro.

Titmus and Ledecky have a great rivalry, with the American coming second to Titmus in the 200m and 400m finals at the Tokyo Olympics, but Ledecky turned the tables in the 800m.

Titmus said she still believed Ledecky was the greatest female swimmer of all time.

"I can't put myself up next to her. What she has done for female swimming has been insane: She's been at this level for 10 years," Titmus said.

"I hope now this is going to keep the battle going — give her some drive, hopefully, we can see how much faster we can keep going," she said.

"I thought that if I went out there and did the best race I could with how I'm feeling, the world record was definitely within my reach," she said.

Titmus said she was currently the happiest she's ever been in her life, in and out of the pool.

"I'm definitely not putting the pressure on myself that I used to, but it's still like a healthy amount," she said.

"And I think that has been the trick to me swimming well — just going out there being completely fearless — swimming what I used to feel like when I was 16.

"Olympic gold was obviously my childhood dream and I feel like I now have that invincibility in swimming, and it has translated to my life outside of the pool.

"Swimming's still my priority, but I feel like I have a great balance out of the pool as well, and that's definitely helping my swimming."

She said, at just 22, she had a lot more left to give to the sport.

"My position as an athlete, I'm just not here to create great sporting moments, but I feel I can be relatable to these younger people," she said.

"Coming from a regional town out of Tassie, I feel like I can stamp that message that it doesn't matter who you are and where you come from, that you can achieve great things."

Titmus has elected not to contest the World Championships in Budapest next month but will, instead, concentrate on the Commonwealth Games in Birmingham in July.

Olympic gold medallist Kyle Chalmers has confirmed that he will swim butterfly events at the World Championships.

The decision means pop-star-turned-swimmer Cody Simpson has missed out on an individual spot after he came third behind Chalmers and winner Matt Temple in the 100m butterfly final at the Australian titles.

Chalmers won the men's 50m butterfly final at the championships, which are doubling as the selection trials for the World Championships and Commonwealth Games.

Originally, Chalmers said that he would not go to the World Championships, then hinted he had changed his mind after his strong showing in Adelaide.

When it was put to him last week that, if he decided to compete, Simpson would miss out on a spot, Chalmers replied: "Well you can't make me out to be the villain, right?"

Chalmers returned home to Port Lincoln after the first few days of competition and, on Saturday, played in a country Australian Rules match.

A Swimming Australia spokesperson said: "The last few days have been difficult for Kyle, both mentally and emotionally, and he believes it's in the best interest of his mental health to remain in Port Lincoln with his family for the next few days."

Simpson has been selected for the Commonwealth Games team, capping an incredible return to swimming.

He's in line to represent Australia in the individual butterfly events at the Commonwealth Games.

Simpson only decided to return to swimming in 2020 after a decade-long career as a pop singer, model and actor.

"I was holding my breath all week, it was obviously a whirlwind," Simpson said.

"I was just trying to sort of not look at what everyone was saying and writing and posting … and just kind of stick to my guns.

"I knew I'd, hopefully, done enough, but you never know for sure until you get the message and I was sitting up in my chair, got that message, my parents both started crying and I sunk down in my chair and gave them both a big hug."

He said he understood Chalmers' decision.

"I think people like to sort of spin a story," he said.

"Considering the limited prep he had got up and gave an incredible effort, so nothing but respect to him for doing that and you know he's well within his rights to decide to swim."

He said his selection was testament to two years of hard work.

"I really went zero to a hundred right away and I haven't looked back since," Simpson said.

"It's been up and down and I've had doubts and I've had good weeks and really s*** weeks, sitting in my room, wondering if I was in over my head."

Australia will take 46 athletes to the Commonwealth Games.

The youngest is 16-year-old Queenslander, Flynn Southam, who will swim the relay events.

Mollie O'Callaghan, 18, has qualified for six individual events, although it remains to be seen how many she will compete in.

The teams for both competitions were named at the end of Sunday night's races.

While Chalmers won't swim his traditional freestyle races at the World Championships, he will at the Commonwealth Games — earning his spot courtesy of his silver medal at the Tokyo Olympic Games.

It's a similar story for Tokyo golden girl Emma McKeon, who elected not to swim the trials and will also miss the World Championships, but has been named for the Commonwealth Games because of her four gold medals at the Olympics.

Shayna Jack has capped her comeback from a two-year drug ban by winning the women's 50m freestyle final in 24.14 seconds: The fastest time in the world this year.

She was under world record pace for the first 40 metres of the race.

Jack, who finished second in the 100m earlier in the competition, says she feels she's back where she belongs.

"I knew I had the support from the community and everything like that but just my personal mentality — I didn't know if I fit in as well as I used to. But you know, I walk around pool deck, head held high."

She says she's now targeting an individual medal at the World Championships and Commonwealth Games.

"Coming back we didn't know what kind of athlete I was, and I definitely came back stronger and fitter," she said.

She said if she won, "You might see my ugly-cry face again."

"I probably might have a bit of a moment to myself just to realise what I've actually achieved this week 'cause I don't think I've given myself that recognition," Jack said.

"I've had so many messages of support and love, but I think I have to really sit down and be proud of myself and reflect on how well I've actually done." 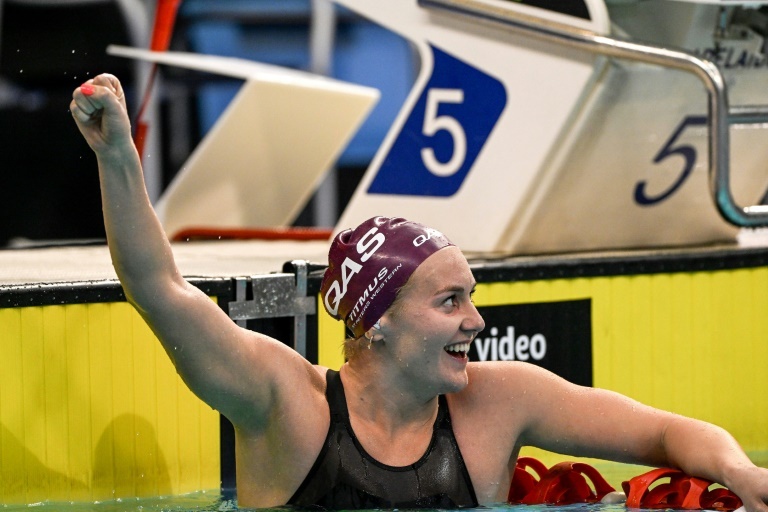