Buenos Aires (AFP) - Recession-hit Argentina announced on Tuesday it has reached an agreement with three major creditors over the restructuring of a $66 billion debt, which the IMF described as a "very significant step" to solving its latest sovereign default crisis.

The government of President Alberto Fernandez had set an August 4 deadline to complete a deal but it has now pushed the date to August 24 "to give effect to the agreement," which came after months of wrangling and extensions.

"We resolved an impossible debt in the biggest economic crisis in memory and in the midst of the pandemic," said a delighted Fernandez."Now the horizon is clear for where we want to go to."

IMF chairwoman Kristalina Georgieva congratulated Fernandez on Twitter, adding: "Look forward to a successful conclusion in the interest of all."

Argentina's economy ministry said in a statement that the deal "will allow members of the creditor groups and such other (bond) holders to support Argentina's debt restructuring proposal and grant Argentina significant debt relief."

The bonds, issued under foreign legislation, represent roughly a fifth of the country's $324 billion debt, which amounts to around 90 percent of its GDP.

Argentina has been in default -- for the ninth time in its history -- since May 22 when the country missed a deadline to pay $500 million in interest on the debt that is subject to the current negotiation.

It missed another deadline last week to pay $600 million more.

The creditors said in a statement they were "happy to have reached a preliminary agreement" that would "provide the country the economic relief necessary for a sustainable path that is needed due to COVID-19."

Last month the three major groups, claiming to represent "60 percent of the exchange bonds and 51 percent of the global bonds in circulation," giving them veto power over any deal, said they had rejected Argentina's latest proposal.

The deal "allays fears of another debilitating legal scrap, akin to what followed the country's 2001 default," Nikhil Sanghani of analysts Capital Economics said.

But he warned that "we doubt that the deal is enough to bring sustainability to Argentina's public debt over the medium to long term."

The payment dates on new bonds have been brought forward by a couple of months "without increasing the aggregate amount of principal payments or interest payments that Argentina commits to make," the economy ministry said.

"The economic issue is resolved, we just need to see the legal aspects in detail," analyst Sebastian Maril told AFP.

Although Argentina lost its access to international markets two years ago, reaching a deal with creditors is key as the country looks to also renegotiate the repayment of a $44 billion bail-out loan it has received from the IMF.

Former president Mauricio Macri had negotiated a $57 billion loan from the IMF but Fernandez suspended the remaining $13 billion in disbursements when he took office in December.

"This agreement should help to bolster investor, business and possibly consumer confidence in Argentina in the near term," said Sanghani.

"Moreover, the deal is likely to pave the way for a renewed agreement between the IMF and Argentina's government."

As well as its commitments to international creditors, Argentina must resolve the situation surrounding a $41.7 billion debt issued under national legislation whose payments have been deferred until December 2021.

Fernandez's government has offered similar conditions to those agreed with the international bondholders.

In recession since 2018, the Argentine economy -- the third largest in Latin America -- has been further punished by the coronavirus pandemic.The IMF estimates it will contract by 9.9 percent this year.

More than a third of the 44 million population live in poverty and annual inflation stands at over 50 percent. 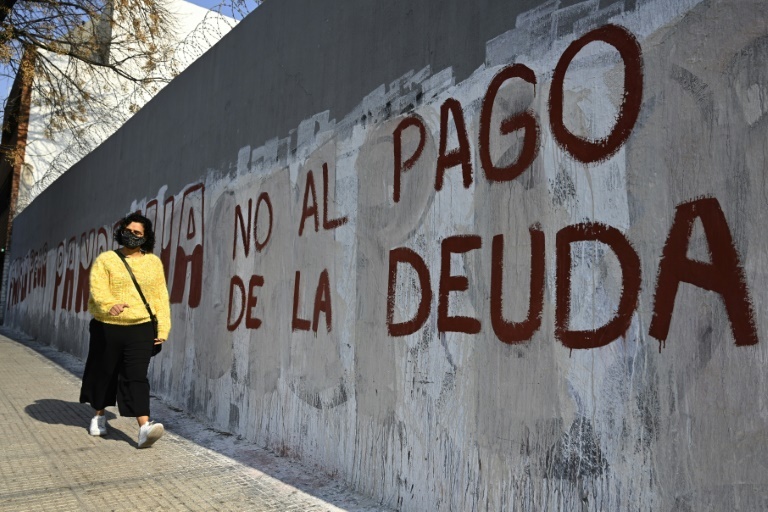 AFP
One subscription that gives you access to news from hundreds of sites
Despite debt deal, Argentina's economic woes remain