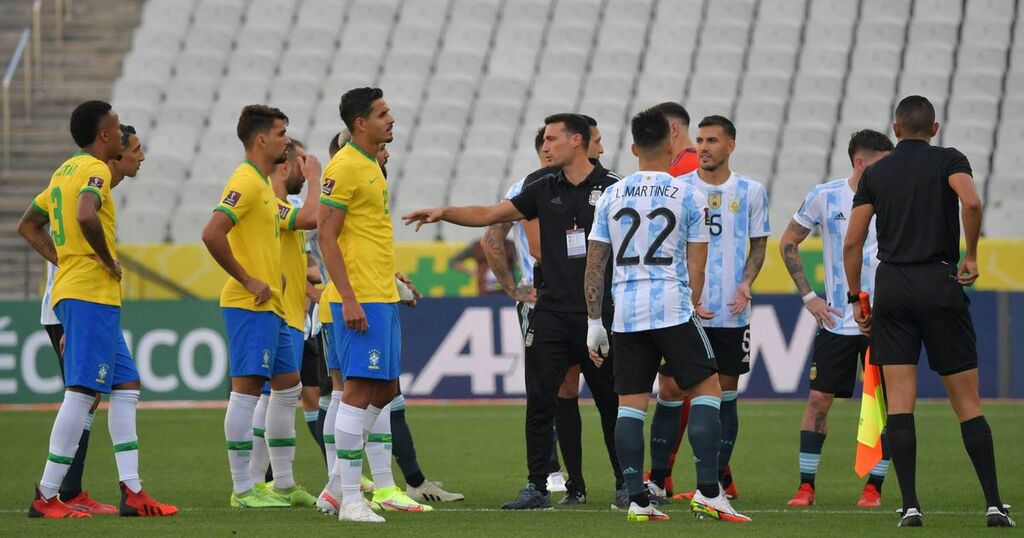 Four Premier League players are being investigated by police as the fallout of Argentina and Brazil's ill-fated fixture continues to unfold, according to reports in South America.

Sunday's World Cup qualifier between Brazil and Argentina was suspended when health officials stormed the pitch due to a row over coronavirus documents.

Tottenham's Giovani Lo Celso and Cristian Romero as well as Aston Villa's Emiliano Martinez and Emiliano Buendia were accused of lying on documents filled out upon their entry to Brazil.

The Premier League quartet were supposed to inform officials they had recently been in the United Kingdom, but they allegedly failed to do so.

Brazilian authorities have subsequently opened an investigation into a potential "ideological falsehood".

That's according to EFE , who claim the Federal Police of Brazil have "opened the establishment of a process to investigate the possible crime of ideological falsehood".

Prior to the suspended match, reports in Brazil claimed Argentina submitted a formal request asking their four Premier League players be allowed to feature.

Globo Esporte claim this application was sent on Saturday, by which time Lo Celso, Romero, Martinez and Buendia were already in the country, allegedly flouting Covid rules.

The Ministry of Health of Brazil is believed to have turned down Argentina's request just 50 minutes before kick-off, while officials brought play to a halt after five minutes.

CONMEBOL, South American football's governing body, then tweeted: "By decision of the match referee, the match organised by FIFA between Brazil and Argentina for the World Cup Qualifiers is suspended.

"The referee and the match commissioner will submit a report to the FIFA Disciplinary Committee, which will determine the steps to be followed. These procedures strictly adhere to current regulations.

What decision should FIFA make regarding the suspended fixture? Comment below.

"The World Cup Qualifiers is a FIFA competition. All decisions concerning its organisation and development are the exclusive power of that institution."

Argentina and Brazil face a nervous wait to discover FIFA's ruling, while Spurs and Villa are also in a tricky situation two players apiece reportedly under police investigation.

Current regulations in Brazil state any person entering the country having recently been in the UK must self-isolate for 14 days.

The Premier League foursome were involved in domestic fixtures for their clubs only days before the match in Brazil.

"These players arrived in Brazil on a flight from Caracas," said Brazil’s health regulator Anvisa. "The flight landed in Guarulhos (Sao Paulo).

"They declared that they had not been in any of the four countries which are restricted for the past 14 days. Anvisa was warned about supposedly false information given by these players.

"After that, Anvisa sent a notification to CIEVS (in charge of Sao Paolo's Covid-19 restrictions). We have to clarify that false information given to Brazilian authorities might be infractions of health laws of the country and might be an infraction of our criminal law."