Are We About to See a Leap From Zion? 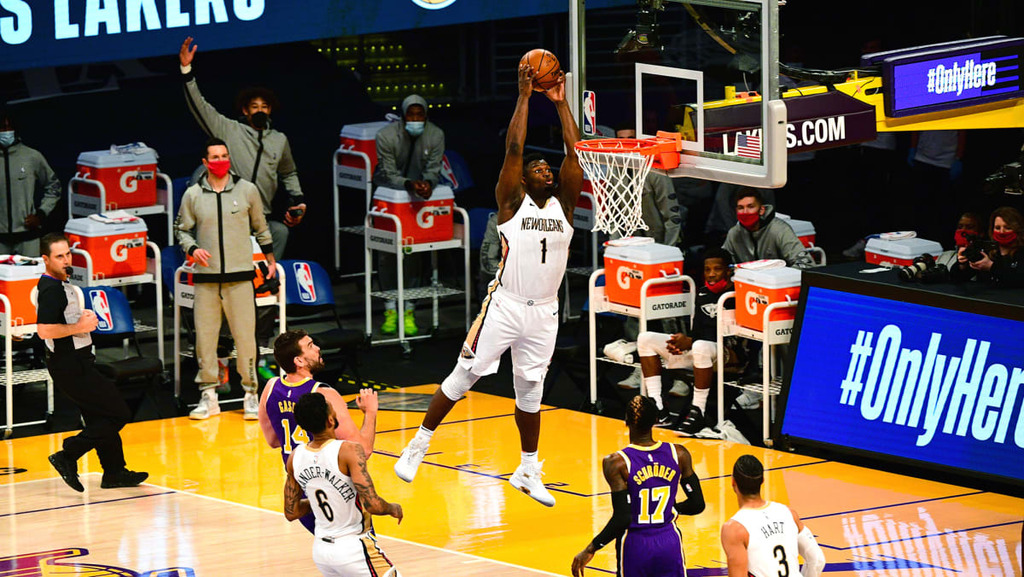 Progress isn’t linear for every NBA star—development can be circuitous and unpredictable for a variety of reasons—but through league history the third year is when so many all-time greats made a massive leap forward. It’s when LeBron James, Dwyane Wade, Chris Paul, Kevin Durant and Anthony Davis established themselves as marquee draws and household names, with statistical surges that occurred as their responsibilities and expectations grew.

It might sound rash to compare Zion Williamson with those aforementioned megastars, but the prodigious 21-year-old is on the same path. As he enters Year 3 of a career that has little more than cobwebs for a roof—despite a bit of murkiness concerning his recovery from offseason foot surgery—Williamson’s ascension toward life as a solution-less offensive weapon may be the 2021–22 season’s most significant subplot.

There are 94 players in NBA history who averaged at least 20 points per game in their second season. Williamson—whose 27.0 points ranked eighth last year—leads them all in field goal percentage, effective field goal percentage and true shooting percentage (where the gap between him and second place, Charles Barkley, is 64.9% to 61.9%—the same difference between Barkley and 15th-ranked Charles Smith).

As historically efficient as Zion has already been, there are myriad reasons why it’s safe to assume he’s barely scratched the surface of whatever it is he’ll ultimately be. Much of that has to do with shot selection. Instead of utilizing an outside shot (or operating in lineups that treat space as a priority) nearly all his damage has been done at the basket or on the way there, undeterred regardless of how tight defenses try to pack the paint.

Williamson attempted 816 shots inside the restricted area last year, which was 267 (!) more tries than any other player. (The gap between Zion and Clint Capela, who came in second, was the same as Capela and 40th-ranked Luka Dončić.) He shot 67.2% there, too, which is remarkable given his high volume and self-sufficiency.

One of the most meaningful differences between Williamson’s first two seasons was how often he scored without a teammate’s direct help. According to Cleaning the Glass, the percentage of his field goals that were assisted dropped 20%—including 22% at the rim.

As “Point Zion” he was confident on the perimeter with a live dribble, plowing into crowds and then elevating with the ball cradled in his left hand, still airborne as everybody else started their descent. When defenses overloaded to keep him at bay, Williamson read the floor and found the open man (his assist rate climbed from 13.3% as a rookie to 19.7% as a sophomore).

He could also fill a more traditional role as the rolling big, even flashing both facets in the same possession, as seen below against the Jazz.

Zion’s post moves are simple because they don’t have to be broad. More often than not, as soon as he retrieves an entry pass, Zion will take one or two dribbles, jolt his defender off balance and then swoop to the cup. His speed, power and coordination outweighed the predictability of it all.

For basketball to look as seamless as it can, five teammates must complement one another at the same time. That hasn’t been the case with Zion, who can score when he wants, regardless of what’s going on around him.

Last year, there were 29 games where Williamson scored 20 or more points while shooting at least 60% from the field. In spite of the season lasting only 72 games and his appearing in 61 of them, no player in the past decade beats that number. From there, it goes without saying that Williamson demanded double teams. And when they didn’t come he was harder to stop one-on-one than any player in recent memory. According to Synergy Sports, he scored 63.2% of the time when attacking single coverage in isolation—the highest mark among 400 players who finished at least 100 such possessions. (Before that, nobody in Synergy’s database—which dates back to the 2004–05 season—came anywhere close to even reaching 60%.) Even solid, smart defenders were completely helpless trying to stop him on an island.

Williamson finished 14th in true shooting percentage and fourth in PER last season, largely because he refused to settle for shots he wasn’t comfortable taking. He hardly ever struck from the midrange and was 10 for 34 behind the three-point line. Even though his success melted away any weaknesses that would otherwise consume this type of criticism, he spent the offseason expanding an attack that should also benefit beside more teammates who won’t be ignored behind the arc.

In come Devonte’ Graham, Tomáš Satoranský and Trey Murphy III—with someone like Nickeil Alexander-Walker (who made 40.2% of his spot-up threes last season) potentially replacing Lonzo Ball in the starting lineup. Out go Eric Bledsoe (who’s a career 33.7% three-point shooter) and Steven Adams (who’s attempted 16 in eight seasons). The Pelicans’ roster isn’t confusing anybody for the 2017 Warriors, but Zion will still be surrounded by more deep threats than any other time in his career. (Even with Jaxson Hayes and Jonas Valančiūnas on the roster, there’s also potential for Zion to spend time at center in like-sized switchable lineups.)

“I’ve got a lot of shooters this year,” Williamson said in a recent interview, before noting that he spent the offseason working on his floaters and midrange jumpers. If his long twos are respectable enough to keep opponents from relaxing every time he hoists them up, it’ll accentuate his first step and reduce the pounding he takes in the paint.

This brings us to one of two roadblocks that currently stand between Zion and a dozen straight All-NBA teams: his body. A pattern of injuries (some random and others potentially caused by his unprecedented combination of size and power) that date back to his time as a high school phenom are a plausible cause for worry. Williamson missed the first 44 games of his rookie season after he underwent surgery to repair a torn right meniscus. Then last year a fractured finger kept him out of the final six games. A couple of months later he had surgery to repair a broken fifth metatarsal on his right foot. None of this is wonderful news, even though he’s expected to play on opening night.

(In May, Williamson acknowledged how important his fitness truly is: “I do think there is another gear that I can reach regarding my weight and conditioning. But … I don’t want to get to a spot where I’m like, Yeah, I lost a lot of weight, but I don’t feel strong. I can’t do certain things I would do before.”)

The other roadblock is defense. Williamson lacks off-ball awareness. He overhelps, bites on ball fakes and has yet to translate uncanny physical gifts (NBA general managers recently voted him in as the league’s most athletic player) that are routinely witnessed when New Orleans has possession to when it’s trying to get a stop. Countless examples could be seen last year, but the one below, where Zion lets P.J. Tucker—a 36-year-old who scored a grand total of five baskets on drives last season—loose on a blowby, might be the most disturbing.

Ideally, new Pelicans coach Willie Green will adopt a scheme that simplifies Zion’s responsibilities. When former Pelicans coach Stan Van Gundy decided to streamline his team’s pick-and-roll coverage by dropping bigs instead of having them stay up at the point of attack, New Orleans’s defensive rating soared up the rankings—including with Zion on the court, where they had the NBA’s second-best defense after the All-Star break.

Williamson isn’t hopeless on that end. And when weighed against his humongous offensive impact, there’s no need for him to make an All-Defensive team. Anytime a 20-year-old averages 27 points per game, posts an outrageous 67.3 true shooting percentage in crunch time and leads his team in point differential by a significant margin, the next step has the potential to be monumental.

In LeBron’s third season he averaged 31.4 points, the most of his entire career. Wade won a championship and was named Finals MVP. Paul’s 11.6 assists were also a career high, and he finished second in the MVP race. Durant upped his scoring average by nearly five points and led the league for the first time. Davis topped the NBA in PER and had the highest field goal percentage of his career. All except Wade made an initial first-team All-NBA appearance during their third year. There’s little reason why Williamson can’t do the same thing, with Most Valuable Player and a scoring title in the realm of possibility.

A historic jump isn’t guaranteed. But if Zion can stay healthy, take advantage of the more compatible pieces around him and even marginally improve his touch and defensive tenacity, history is exactly what he’ll make.