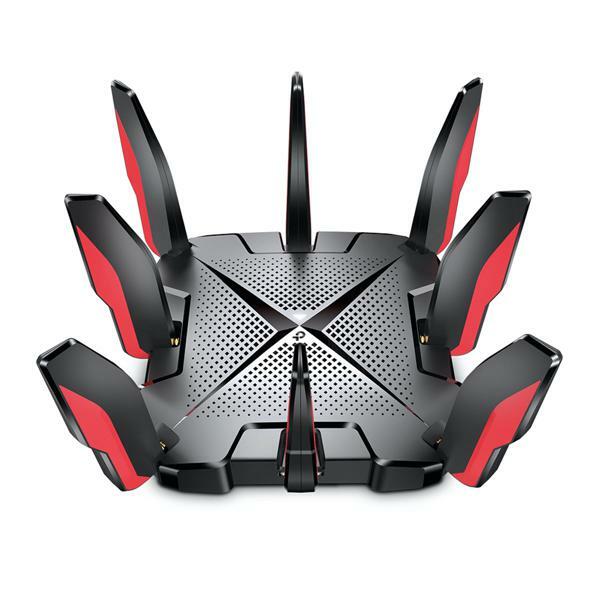 Gamers are a demanding breed and ferociously competitive. The last thing a serious player wants is kit that doesn’t work when it matters or a router that’s sluggish and doesn’t offer enough speed that can ensure they win their game. To cater to these incredibly serious consumers, several companies now produce special gaming routers that are packed full of extra features designed to give even the most competitive gamer the edge.

One of the latest gaming routers comes from TP-Link, a company specializing in making networking gear that offers seriously good performance at a relatively affordable price. As a leading global networking brand, TP-Link is well placed to launch the Archer AX6600, a tri-band, Wi-Fi 6 gaming router otherwise known as the GX90.

This beast of a router caters to every gamer's whim thanks to its support for ultra-fast tri-band with the latest Wi-Fi 6. The GX90 also includes a dedicated channel for gaming that provides speeds of up to 4.8Gbps reserved exclusively for gaming.

Additionally, the GX90 is powered by a 1.5 GHz Quad-Core processor to ensure network performance is always at peak run. A 2.5G WAN port can accommodate Gigabit broadband and even higher speeds as they come on stream while a custom gaming user interface, game accelerator with a real-time collection of game statistics round off the standout features. TP-Link claims the GX90 has everything a gamer needs to dominate and win a game.

The Archer GX90 uses the dynamic tri-band Wi-Fi 6 standard which provides three distinct bands that can be coupled together to provide a combined data transfer speeds of up to 6,579 Mbps. Because it’s WiFi 6, this router has enhanced OFDMA for better latency and faster average throughput up to four times faster.

Imagine your WiFi signal is like a series of delivery trucks, each delivering packets of data to your devices like smartphones, laptops and gaming consoles. With regular WiFi, each delivery truck or packet of data could only deliver one parcel to one device at a time. However, with OFDMA, each truck can deliver lots of parcels to many devices at the same time. This results in massive efficiency improvements when uploading and downloading with devices that are WiFi 6-compatible.

The dedicated gaming band of the GX90 uses HE160 technology to provides users with speeds up to 4,804 Mbps and it prevents interference from other devices on the network that might otherwise slow the gameplay down.

Like many gaming routers, the design of the Archer GX90 is tailored very much to the gaming community. It looks a bit like a spaceship and its top is peppered with diamond-shaped ventilation holes to keep cool air passing through the router by convection. There are eight Beamforming and high-power FEM antennas that form a signal-boosting array that can cover larger areas and eliminate dead zones, even in a large four-bedroom house. The antennas clip into the coaxial connectors ranged around the outside of the router and the blades of the antennas are red and black, giving the GX90 a smart sci-fi appearance.

The build quality of the GX90 is robust and there are two screw holes on its base that can enable the router to be mounted on a wall if required. At the rear, there’s a 2.5Gbps WAN/LAN connection, plus one Gigabit WAN/LAN and three Gigabit LAN ports for connecting wired devices. On the right of the case are two USB ports; one is USB 2.0 and the other is USB 3.0. These ports can be used for shared network storage or a private cloud.

At the front of the router are three small buttons for WPS, disabling the WiFi signal, plus turning off the LEDs on the router should they prove off-putting if the GX90 is in a bedroom, and you want to be able to sleep at night without all those winking LEDs.

At the heart of the GX90, there’s a powerful 1.5GHz quad-core CPU that has all the muscle power to handle heavy data throughput and crush lag. The 2.5 Gbps WAN/LAN port ensures the best-wired connection possible. An onboard game accelerator can automatically detect when popular games are being played and it then optimizes the router’s gaming streams to ensure that gaming sessions stay immersive by providing a signal that’s as fast as a gamers’ reaction speeds.

The Archer GX90 has a game protector, an enhanced HomeCare security system that offers protection for keeping user accounts and system safe with a malicious site checker, port intrusion prevention and infected device isolation, all while checking for viruses. All this protection is done at the router level so there’s no need to add further antivirus protection on client devices.

Real-time gaming network status is added to the Archer GX90’s game statistics feature, which provides full dashboard reports on a game’s duration, system utilization and real-time latency with fine-tuned UI elements. The idea behind this is to keep the user informed of the precise network resource allocation.

Finally, the Archer GX90 router is compatible with OneMesh, a new standard for mesh networking. The GX90 can function with any OneMesh range extender to create a seamless whole-home mesh network to give coverage everywhere it’s needed. Without the range extender, the GX90 can easily cover the average three to four-bedroom home. The inclusion of OneMesh is a very welcome addition and it’s the first router I’ve seen with the standard installed and ready to go.

Verdict: TP-Link’s Archer GX90 is a monster of a router with a lot of speed and power. It has the muscle to handle multiple users with fast and simultaneous data delivery. The eight high-performance and beamforming antennas that should ensure the whole home is bathed is the very latest tri-band WiFi 6 wireless that should future-proof the GX90 for a good while to come. The built-in game accelerator promises a speed advantage and there’s the HE160 technology that provides users with speeds up to 4,804 Mbps exclusively to gamers and prevents interference from other devices that could impact gameplay. If gaming is central to your life and you want to squeeze every drop of advantage from your gameplay, the Archer GX90 is worth a very close look.